The final chapter... in this franchise... unless they want to do another one. 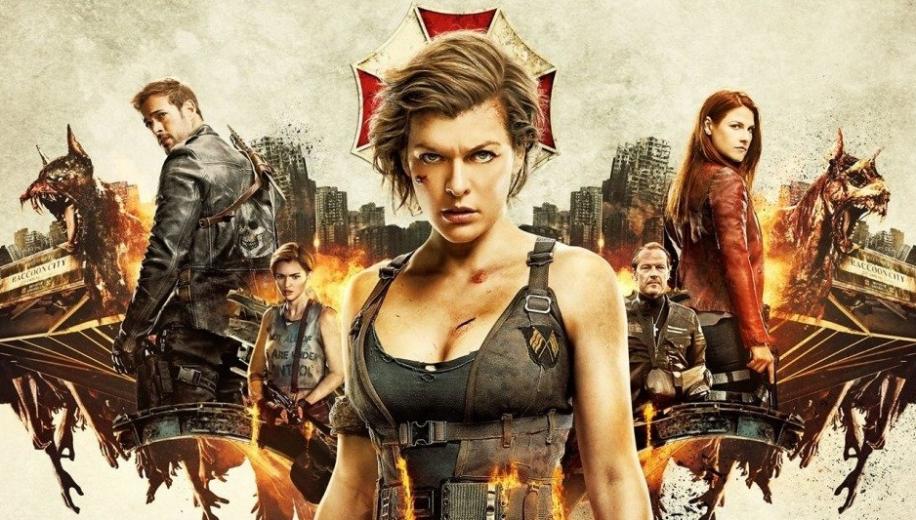 Resident Evil: The Final Chapter purports to bring the biggest and most-successful video-game adaptation franchise to an epic conclusion.

Despite director Paul W. S. Anderson's claims, the news that a new reboot franchise is on the way, and an ending which leaves the room for plenty more sequels - should they choose to do just do more in this franchise - means it doesn't much feel like the final anything. A massively popular franchise, the series has never really been better than its reasonably inventive, tense first instalment, soon devolving into CG-driven cartoon violence outings of increasingly outlandish proportions, eventually resulting in Alice, the character played by star Milla Jovovich (who really has largely been the saving grace of the franchise), basically turning into an invincible God. If anything, playing around with plain old human Alice, as she tries to complete her painful quest, is a little bit of a step down in tempo.
Her return to the Umbrella Corporation facility under Raccoon City is to uncover all of their secrets and end the zombie apocalypse once and for all (who'd have thunk, after all this time, there was an anti-virus - could have saved audiences a lot of time). It's simple, but also frequently nonsensical. The action is moderately engaging, but Anderson - who hasn't really directed a decent movie since Event Horizon some 20 years ago - gives it the look of a glorified DTV outing, failing to capture the scale of the more epic video game creations, and struggling to bring closure to a franchise he's clutched to for 15 years. Where prior instalments at least had stunning visuals to provide a wild experience, The Final Chapter is an ugly, unpolished way to end things and is only intermittently satisfying.

Resident Evil: The Final Chapter was filmed digitally using various cameras including the Red Epic, with a source resolution of as much as 5K. It was also finished with a 4K Digital Intermediate (DI), resulting in a native 4K image on this Ultra HD Blu-ray disc, although the 2160p presentation, framed in the movie's original theatrical aspect ratio of 2.40:1 widescreen, is surprisingly problematic, so much so that - shockingly - you may even be better off watching the accompanying 1080p Blu-ray instead.


You may be better off watching the Blu-ray instead

Undoubtedly - as comparisons to the Blu-ray will show - the film was shot in a really clumsy, beyond shaky-cam way, devoid of style, often leaving the action incomprehensible and at times painful to watch. It's also a really dark, dirty looking film - not raw and textured in its dirtiness, but just plain dingy. Black levels are handled badly on the Blu-ray, leading to frequent shots that have banding, washed-out grey backdrops and just a generally unpleasant look. However the Ultra HD somehow manages to only accentuate these problems, pushing them to the fore until they are so glaringly obvious that you'll wonder whether there's something wrong with your TV.

There are shots that look quite good, lapping up some level of detail - whether on imaginative combat-predicting HUDs, or even on the Red Queen herself - that remains reasonably consistent but is clearly overshadowed by the aforementioned problems. Similarly the implementation of WCG and HDR gives the colours more vibrancy than on the Blu-ray counterpart, but also often just highlights the problems already present on it further. There really is little reason why a native 4K Ultra HD Blu-ray release of a modern effects-driven movie should look this washed-out and ugly.

Cas Harlow reviewed the audio using a standard 5.1-channel setup – The excellent Dolby TrueHD 7.1 core, is, conversely, almost impossible to fault. Given the action seldom lets up - but for a few moments of exposition littered across the reasonably curt runtime - it's a bombastic, atmospheric affair which sweeps you up and throws all manner of chaos at you. Dialogue remains clearly and coherently disseminated, whether in Alice's voiceover, or the echoing Red Queen A.I. and the score maintains the same themes and tones as the previous chapters, seldom bringing anything memorable to the game, but certainly setting the tone for the persistent threat level, and giving the surrounds plenty to do. The effects, of course, are clearly impressively standout, with some nice discrete observation, and plenty of punch hammering at you from every angle - whether it be winged zombie creatures sweeping down like dragons from above, the horde thundering along the highway by the thousands, or fire and brimstone being hurled in what was almost a medieval siege sequence. It's a great track, and that's even before we dip into the Dolby Atmos enhancements.


Despite issues with the image, there are no such doubts about the Dolby Atmos soundtrack

Steve Withers reviewed the audio using a 7.2.4-channel Dolby Atmos setup – The Dolby Atmos soundtrack is an absolute blast that almost makes up for the issues with the image and is probably the main reason for watching the Ultra HD Blu-ray rather than the regular version. It will probably come as no surprise to discover that a Resident Evil soundtrack is far from subtle but this sonic assault turns everything up to eleven in an attempt to pummel you into submission. The almost constant action is accompanied by a cacophony of effects that completely immerse the viewer with sounds being steered around the room with precision thanks to the object-based mix and effects arriving from ever direction. The track is also loud with a generic but 'drum and bass' score and plenty of low frequency extension through the LFE channel. However despite this the dialogue always remains clear and focused on the the screen and there is a nice degree of clarity and localisation within the 'kitchen sink' sound design. There are plenty of stand-out moments but the attack by the winged creature and the sequences in the tunnels of the Umbrella Corporation's base are particularly memorable, making this a demo-worthy soundtrack.

Unfortunately the Ultra HD Blu-ray disc itself ports over none of the extras, made all the more frustrating when you realise that the extras are not only on the main Blu-ray disc, but on a further, second Blu-ray disc which pushes a whole '30 minutes' of further material.

Headlined by a video commentary-esque Retaliation Mode option, which has director Paul W. S. Anderson and his muse/wife/star Milla Jovovich talk you through the movie, with plenty of behind the scenes footage, there's really little more that you need beyond this epic feature. There are also a few additional featurettes, a few minutes each, looking at the stunts, the locations and the returning core female characters. The second disc adds yet more Featurettes, looking at directing the final chapter (somebody directed this film?), the script (there was a script?), and more on the new cast members, but none of it was really worth putting on a separate disc. An ugly, unpolished and only intermittently satisfying way to end things

Paul W. S. Anderson's Resident Evil franchise was never a beacon of quality content, but it generally involved slickly-made, competent apocalyptic zombie action films. Fans coming to the fourth or fifth instalment, generally, knew exactly what to expect. Unfortunately this purported final chapter doesn't even look good, let alone deliver a semi-satisfying climax, and makes for a pretty shocking Ultra HD Blu-ray release - potentially one of the worst on the market - thanks to truly washed-out, dreary video with an unforgivable amount of problems. It's one of those thankfully still relatively rare occasions where you're likely better off turning to the Blu-ray instead. At least the Dolby Atmos audio is great and there are a nice few extras and fans of the eternally gorgeous Milla Jovovich blasting zombies will probably still want to find out how it all (sort-of) ends.