Out with the new and in with the old 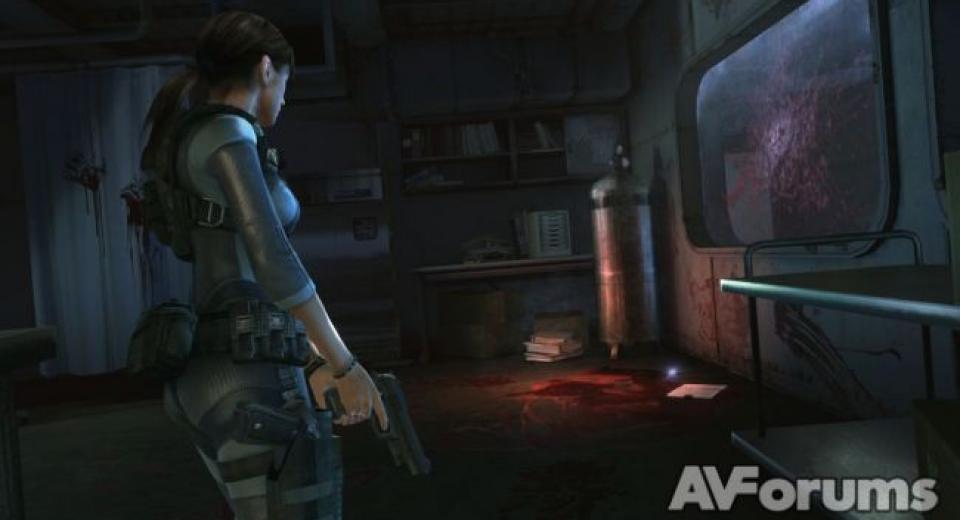 The Resident Evil franchise is in trouble, after the dizzying heights of Resident Evil 4, Capcom deployed the parachute of Resident Evil 5 which slowed the inevitable descent but failed to alter the downward trajectory. Foolishly they cut their own chute, with Resident Evil 6 tumbling into a free fall of directionless homogeneity. With the situation growing desperate, help comes from the most unexpected of places, the 3DS.

Resident Evil: Revelations was first released on Nintendo's handheld back in 2012. Taking place before the events of the last numbered entry, it allows Capcom time to regroup and take a long hard look at the franchise, while ensuring the last memory of the series isn't the bitter taste of their last outing. Almost instantly the warmth of familiarity can be felt as you take Jill Valentine and new partner Parker deeper into the Queen Zenobia, a seemingly abandoned cruise ship laden with B.O.W.s (Bio Organic Weapons), in search of your old partner Chris Redfield, who has gone missing with his new squeeze Jessica.

Never has the series' trademark "tank" controls been so happily received. Resident Evil 6's influence can still be felt, weapons are still switched by bar interface using the D-Pad and melee attacks from enemies still trigger thumb stick waggling or button mashing Quicktime events (QTEs), however they are nowhere near as intrusive or frequent, making them much more bearable.

The Queen Zenobia might just be the best environment in the series since the mansion from that seminal first outing. Jill and Parker navigate through an open map, which you will become very familiar with as you explore deeper into the bowels of the ship and the mysteries it contains. Exploration returns as a big part of the gameplay, you will be forever backtracking in search of those elusive keys to unlock new areas and items. To help you along you are given a new device known as the Genesis, which takes you into a first person perspective and allows you to scan enemies for health rewards and reveal hidden items in the environments. It fits nicely into the tension as the restrictive view of the Genesis more than once distracted me from danger lurking nearby; waiting for me to wander past in tunnel vision.

Together with the essential mini map in the corner, helping you navigate the maze like ship, it makes for some tense gameplay further escalated by the scarce ammo resources. It wouldn't be a Resident Evil game if you didn't have to run from a group of enemies in search of ammo; frantically pulling out the Genesis in the hope of finding a precious clip somewhere represents the most tense gameplay the series has delivered in years. Every few chapters you will jump into another set of characters to see the story from a different perspective. Perhaps a flashback, perhaps events happening in parallel with the occurences on the ship. They act as a brief respite from the tension and dark dingy corridors, taking you to different locations and are usually much more action focused, offering you a fully loaded arsenal to complement the waves of enemies you encounter.

The combat in general returns back to the tried and tested formula of useful weapons which require some quick and accurate target acquisition due to the slow controls. There is no run, the fastest you can move is akin to the speed of an urgent stroll and there is almost no ability to move and shoot. Enemies take increased damage depending on where you hit so a well placed shot or two with a pistol can and will save your life in a pinch. You will spend a lot of time running and reloading before standing your ground and picking your shots.

Weapons are acquired through the aforementioned exploration and can be upgraded at stations through the world, allowing you to improve aspects such as rate of fire, ammo capacity and damage. You can also choose which weapons you take with you from pistols through to shotguns, machine guns and rifles, allowing you to customise your arsenal to complement your play style.

Revelations has made the jump from 3DS relatively painlessly, the graphics are obviously lacking, with the cut scenes suitably slick but the the character models of enemies and just about every texture still bearing the hallmarks of its underpowered inception. The AI is also frustratingly useless, frequently standing by as you do the lion's share of the work and offering little to no help in the tough encounters. The menu options which once inhabited the second screen have now slipped onto the big screen with little fuss and, although the gyroscope effect of looking around a room with the 3DS is missing when using the Genesis device, scanning is still addictive and rewarding. Co-op is understandably missing from the campaign as the well crafted atmosphere would have been shattered by the obligatory Xbox Live wise cracking, but there is the opportunity to work with friends in the Raid mode. This replaces Mercenaries in favour of a score attack mode, which now has you levelling up and upgrading gear for your next run through the reworked campaign areas. It's the usual co-operative blast and the XP hooks go a long way to making up for the loss of the Mercenaries formula.

It's not often I applaud a game for returning back to a formula it has been milking for years. However, so bad were Capcom's recent attempts to bring Resident Evil forward, that this comparatively archaic design almost feels like a breath of fresh air. They demonstrate a far better balance of the old atmosphere, exploration and horror elements and the new inventory system and scanning mechanics. It finally succeeds in creating a title which feels like a survival horror game, broken up with some action gameplay encased in one of the best environments Capcom have yet conceived. It does inherit some flaws from its handheld counterpart, which occasionally show through, but overall the experience left me with a feeling of optimism which Resident Evil 6 deprived me of. Capcom still have the ability to make a good Resident Evil game, and Revelations is proof there is life in the series yet.