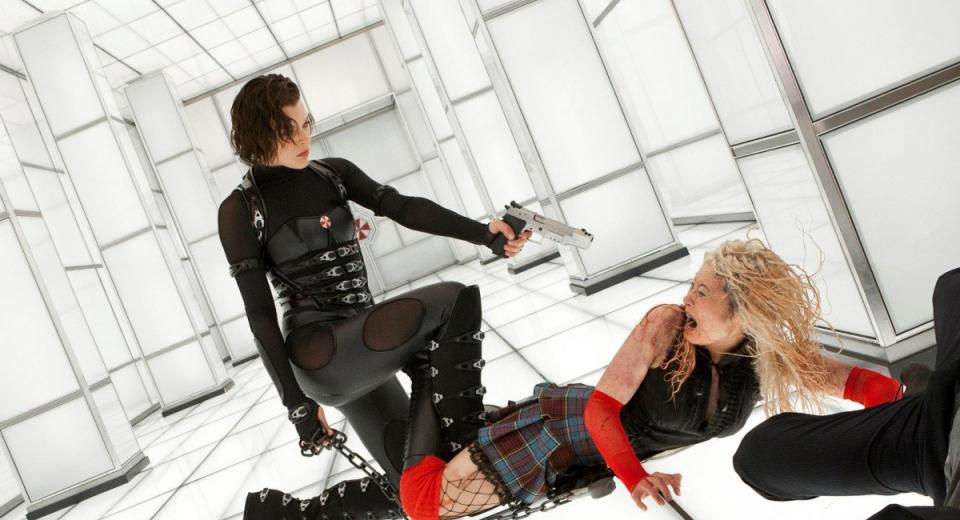 Resident Evil: Retribution comes to UK Region Free Blu-ray with a stunning video presentation that looks smashing in both 2D and 3D, but has considerably more impact in the latter. The 1080p High Definition rendition is in the movie’s original theatrical aspect ratio of 2.4:1 widescreen. As with the last entry in the series, Afterlife, Retribution was shot in native 3D and it really does benefit the picture, however this time around it was shot using the Red Epic camera in 4K resolution, arguably making it a noteworthy step up from Afterlife’s already impressive Sony F35 footage.

Offering up some wonderful frame depth, this really is what 3D is all about: a perfect blend of intermittent quick-fix point-at-the-screen moments (explosive sparks, giant axes slicing through your living room) and frequent longer shots that explore the seemingly endless depth on offer. I briefly touched on this in the main film review, but the corridor sequences are stunning – CG dominated moments always tend to have a better 3D effect – with the Umbrella facility boasting impressive set-piece after impressive set-piece.

There is a strong perceivable distance between each layer, allowing foreground objects to stand out against the far-off background, and middle-ground elements ranking at individuated layers in-between. There is also a fantastic solidity to each object; a tangible 3D volume to each element, with neither the characters, the weapons, or the background structures ever coming across as 2D cut-outs – quite the opposite. Even the computer HUDs have been developed to incorporate 3D elements; hell, even the Red Queen has had a 3D makeover! Cars, houses, sawn-off shotguns, grappling guns; zombies, las plagas, lickers, and those man-mountain executioners – everything has a wonderful roundedness to it, right up to and including Milla’s PVC-clad body.

From slow-motion shots (like the impressive opening reverse slo-mo credits sequence) to the revisited rainy streets of Toyko; from the atmospheric Arctic tundra to the huge elevator drilling deep into its icy depths – this is one of the top 3D movies out there at the moment, and there are still scant few adult-rated (i.e. R-rated or 15+ certificate) films out there which are made using this technology, less still that look so damn impressive.

Unlike, say, the UK release of Dredd, the 2D counterpart is almost as stunning as the 3D version. Although not all that much brighter – this is a compliment towards the 3D version, which is one of the brightest live-action 3D movies I’ve come across, rather than a slight towards the 2D counterpart – it offers up a wonderful, near-flawless image. Detail is outstanding throughout, with crystal-clear definition on everything from the closer images to the background shots – most often generated purely using CG.

Clarity is resounding, with no signs of any digital defects; no softness, no unwieldy DNR application, no edge enhancement, no artifacting, banding or crush. It’s superb. From the skin textures to the clothing weaves; from the reflections in pupils to the defined hair – and every little background touch that adds to the impressive image. Contrast is excellent, with strong black levels that offer up welcome depth without any loss of shadow detail, and only a hint of bloom at the opposite, bright white, end. Colours are rich, if digitally implemented, having that refined post-production feel to them even if the palette is broad and offers up plenty of vivid and vibrant tones.

The 3D-designed imagery clearly doesn’t work as well in 2D – it wasn’t intended to – and, whilst this doesn’t affect the technical limitations of the picture, it may diminish your enjoyment of the movie itself somewhat. This is an immersive spectacle in 3D and it simply doesn’t have the same effect in just two dimensions. Unfortunately that’s something which you will probably just have to accept with decent 3D movies – their 2D alternatives are always going to be lacking. And this is an excellent 3D presentation which gets top marks. It’s doesn’t get any better than this.

Just as impressive as the video is the thoroughly immersive accompanying DTS-HD Master Audio 5.1 track which offers up dynamic depth and aggressive punch throughout, right from the opening action set-piece through to the kick-ass finale. Of course we get clear and coherent dialogue throughout the piece, never let down despite the bombastic elements also on offer, allowed precise clarity across the frontal array, but clearly the two most important parts of this soundtrack are the score and the effects. The former is a slight derivation on the previous Resident Evil themes, but it is a welcome development, borrowing a suitably rousing, thematic emphasis to lend substance to an otherwise generic offering; it provides the surrounds with an almost-constant background input, whilst simply taking over during many of the bigger set-pieces – of which there are plenty. Effects come thick and fast and from pretty-much every single direction, with excellent separation across the channels: listen as the helicopters whip their way across your living room with thunder and precision. Gunshots ring out with a deafening, echoing blast, each different weapon getting its own distinctive sound, from the assault rifles to the sawn-off shotguns, to the machine-pistols and heavy weaponry. Explosions will rock your sofa, but the LFE channel isn’t solely reserved for the more punchy elements, with plenty of depth given to the entirety of the proceedings. It’s a superior track which keenly balances precision and punch, and is hard to fault. Demo and reference quality in every way. Offering up a pleasant surprise, this two-disc Resident Evil: Retribution release boasts a dual 2D and 3D feature film disc which stands apart because of its 3D-enabled extras, most notably a nice salvo of action-orientated Deleted Scenes – as well as a separate disc dedicated purely to further Special Features.

Audio Commentary with Writer/Director Paul W.S. Anderson and stars Milla Jovovich and Boris Kodjoe offers up the more trivia-packed, anecdotal accompaniment, regaling on-set antics and behind-the-scenes trivia with only some light technical input. Although the trio – particularly the actors – tend to come across as delighted fans watching their creation for the first time in all its glory, this really doesn’t make for a very informative track.

Audio Commentary with Writer/Director Paul W.S. Anderson and Producer Jeremy Bolt is far more informative, and only slightly dry as a result. It’s a largely technical affair which delves into the filming techniques and the production details, whilst noting the ongoing story within the saga and the way in which they’ve attempted to shift things up a little bit for this chapter. Whilst not an utterly enthralling accompaniment, at least it isn’t as self-congratulatory as the first track.

Deleted and Extended Scenes provides 12 minutes of new or extended footage, split into five scenes which are dominated by extended sequences as opposed to outright new scenes. Still, they are mostly quality 3D scenes (including an extended version of that superb corridor sequence which now boasts more neck breaks) and it’s a nice touch to see longer variations here as well as the new stuff, all, of course, also presented in 3D. The longer ‘family life’ sequence just purports to add a few more character touches; the corridor scene is always worth watching again; there’s any extra bit with Ada and Alice dealing with one of the evil Rain clones (this new sequence doesn’t appear to have completed effects) which is followed by a new Umbrella facility scene with possessed Jill Valentine and evil clones Rain and One Shot looking at the aftermath of Alice’s escape; and finally there’s an extended scene when they return to the suburbs and find the girl, and where we see what happened to Ada.

Outtakes runs at just under 5 minutes and is also presented in 3D, with goofs ranging from the actors hitting themselves with their own weapons, to accidently ejecting their clips in the middle of shooting their weapons, to the set collapsing unintentionally. There’s a lot of messing around on the set – it clearly looks like a fun shoot – and this might be worth a quick watch.

The first disc is rounded off by a series of Preview Trailers, also in 3D.

Power up the classified files of Umbrella Corporation’s greatest experiment: Project Alice. Navigate through an interactive database, see exciting movie clips and investigate the living, the dead and the undead of the Resident Evil universe.

Project Alice offers up an interactive database of all the characters – living and (un)dead – from within the franchise, whereby you can see character bios, stills and clips from their various contributions across the movies.

Maestro of Evil – Directing Resident Evil: Retribution is an 8-minute Featurette which offers up cast and crew interview snippets and behind the scenes footage, highlighting the Director’s style and work on the franchise as well as the benefits and difficulties with shooting in 3D. They also talk about his partnership with Milla Jovovich and the power-base they have which basically dictates the course of the series, as well as the more fun aspects of the filmmakers working together on this project.

Evolving Alice spends 7 minutes looking specifically at Milla Jovovich and the development of her central character, Alice, across the course of the series. It also works as something of a catch-up for those who need reminding of what she’s gotten up to over the last 4 films, coming complete with clips from the various movies.

Resident Evil: Reunion takes 10 minutes to look specifically at the big highlight of this latest addition: the return of all the major cast/characters from across the series, with interview snippets from them talking about what it was like coming back and how they fitted in to the grander Resident Evil scheme.

Design & Build – The World of Resident Evil: Retribution spends 9 minutes looking at the extensive CG work used to bring this world to life; the stunning backdrops and interesting settings all created on a computer.

Drop (Un)Dead – The Creatures of Retribution is a 7 minute piece that looks specifically at the various different zombie-evolved CG creatures that populate the film, from the Lickers to the Las Plagas.

Resident Stuntman takes 6 minutes to look at the action set-pieces in the movie, how Milla did most of the fight sequences herself and the training she therefore required; the fight choreography; the use of 3D and the various weapons used.

Code: Mika is a 6-minute piece dedicated to actress Mika Nakashima – who pops up in the Tokyo redux sequence – who talks about her brief appearance in the last movie and how they wanted her back to stand-off with Milla’s Alice. Like the very zombie undead they focus upon, the Resident Evil franchise simply will not die, and with the latest two entries - Afterlife and this film, Retribution - proving to be the most financially successful, perhaps they never will. Unfortunately the quality of the films has remained consistently low ever since the first sequel to the promising original movie, 1997's Resident Evil, and, despite the return of writer/director Paul W.S. Anderson, it fails to really deliver anything other than stylish action setpieces and PVC-clad Milla Jovovich, both in abundance. That said, the biggest selling-point of Retribution is that it was shot in 3D and remains one of the few adult-rated live-action feature films which actually make impressive use of the format. This alone may make the movie more interesting to viewers: it certainly is an involving experience, in spite of the limited acting, script and story.

On Region Free UK Blu-ray we get stunning picture-perfect 3D video and High Definition audio - arguably reasons alone to pick up this release - as well as a selection of extras, including a few nice 3D extras too! Honestly, whatever your reservations about the movie itself, this will make for an excellent 3D demo disc, and even the film is considerably more bearable when watched purely for the 3D spectacle.