Horrifying for all the wrong reasons 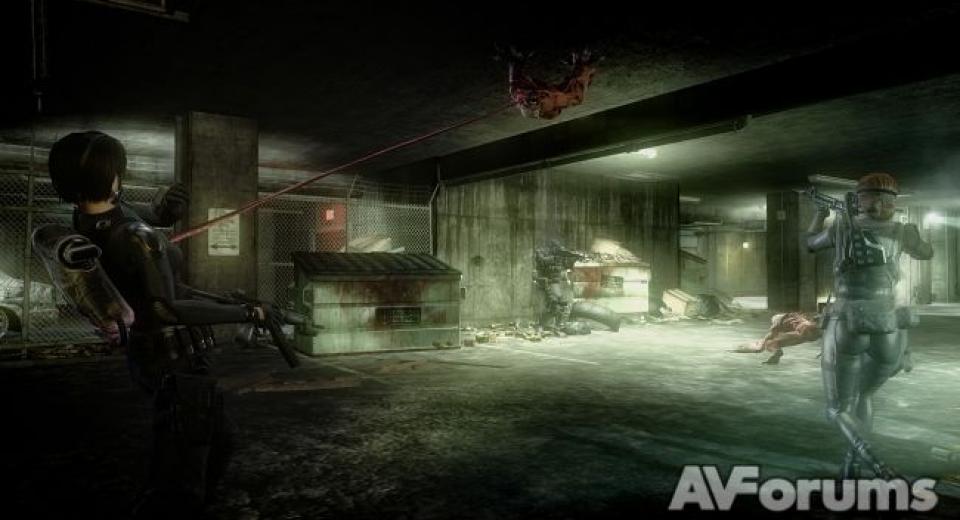 Making significant changes to a franchise is obviously a risky business, but there is no shortage of success stories. Series as diverse as Fallout, Mario, and perhaps most famously Grand Theft Auto, have all been reinvented masterfully by taking advantage of newer technology and honouring the source material.

Another title that can be added to the list is Resident Evil 4, which breathed new life into its franchise and was arguably one of the finest games of its generation. Unfortunately, most other attempts at tinkering with the Resident Evil formula have been less triumphant (light guns, anyone?).

So it's against a backdrop of mixed success that Slant Six Games bring us Resident Evil: Operation Raccoon City, an explicitly non-canonical spin-off and a fresh experiment with Resident Evil's genre and mechanics: a co-operative, squad-based third-person shooter.

Players control a team from the Umbrella Security Service, the bad guys from the previous games. There are a number of fairly standard character classes from which to choose, each with relevant unlockable special abilities and loadouts. The story kicks off with the four-person squad hunting for William Birkin, but when the t-virus outbreak occurs, the squad's focus shifts to distancing the company from the incident. Raccoon City is riddled with glitches and sloppy design choices. The most apparent of these is the woeful artificial intelligence. The three computer-controlled squadmates in single-player mode are worse than useless, providing no assistance and behaving irrationally at best, idiotically at worst.

The enemies' AI is almost as bad, but that's only one of a cluster of problems. Military opponents are veritable bullet sponges and zombies' resistance is inconsistent. Play through a couple of missions and it'll seem there are only a handful of zombie character models, a fact that once noticed is impossible to un-notice (so apologies for pointing it out). In most cases Slant Six didn't even bother with a token palette swap, it's just the same tubby hoodie, skinny cop, bald guy and bare midriff girl over and over again.

This undoubtedly contributes to the total lack of atmosphere in Raccoon City. On paper, revisiting the events of Resident Evil 2 and 3 from a different perspective is a mouth-watering prospect that should have been a little like the scenes in Back to the Future: Part 2 when Marty revisits the Enchantment Under the Sea dance. Instead Raccoon City calls to mind those appalling movie spin-off games we've all been duped into buying at some point or another in which, for example, a generic player-character in a generic sub-par action game is given a lick of red and gold paint and called Iron Man (yep, still bitter).

Sure, Raccoon City has references aplenty to places, people and events of the previous games. But it all seems soul-crushingly forced; the Resident Evil universe seems somehow shoehorned in. There's a definite sense that this is a shooter skinned as a Resident Evil game, which in the eyes of many of the series' fans will be the most unforgivable sin of all.

But there are some areas in which Slant Six get it right. Dead Space has taught us that blowing off enemies' limbs never fails to entertain, and when it works in Raccoon City it works well. However, the inconsistency strikes again here - a few clean shots to an arm are as likely to kill enemies as dismember them.

Another nice touch: Blood attracts the undead. That means it's often preferable to wound rather than kill military personnel, in order to make them targets for zombies. Picking off your enemies as they turn on each other is satisfying, and recalls in some very small way those thrilling sequences from the Half Life games.

With those exceptions aside, Raccoon City's mechanics are a frustrating mess: The snap-to-cover system is hyper-sensitive, there's little sense of contact when bullets hit enemies, and melee is comically overpowered. The first boss makes a mockery of good game design (no spoilers, but it needs to be endured to be believed), and on countless occasions on my playthrough, enemies simply appeared out of nowhere. In short, it's a campaign that fails to deliver. Whether you play alone, with friends, or with strangers, it's over in a few hours and however it's played there's very little fun to be had.

Co-op with friends is marginally more satisfying than single-player; it at least provides people with whom you can commiserate. But trudging through the campaign with strangers is best described as hollow; Slant Six's design choices make any kind of camaraderie almost impossible to achieve.

The characters are so two-dimensional they'd be invisible if viewed side-on. There is nothing to like or dislike, they are faceless caricatures. Take 'Four Eyes' for example, a scientist who is '... so deeply focused on her work that she has little interest in [...] the feelings or lives of other human beings'. It's lazy, superficial, and to top it all off, irrelevant to the plot.

Contrast that with Left 4 Dead, the natural reference point for Raccoon City. In one devastatingly tight introductory sequence, the heroes, situation, weapons and threats are all covered. Characters may not be deep, but they are well-drawn and every word that comes out of their mouths is consistent with their nature. So if, for example, Bill gets ridden away by a Jockey, other players will instinctively think, "Bill's in trouble." It doesn't matter who's controlling him, it's the character with whom the relationship is forged.

This is reinforced by L4D's on-screen and audio prompts. Players are relentlessly instructed to stick together, and teamwork is necessary for success. Every time some ammo is found, the character will announce it to the rest of the group. It's a smart design choice to cut the player out of this interaction, the game itself notifies teammates. Raccoon City stands in stark contrast - without using a microphone it's impossible to communicate that you've found a green herb or anti-viral spray. Players kill, explore and discover in isolation.

There are signs that the developers tried to make players co-operate. For example, it's possible to become infected and turn into a zombie. Having to put down an undead squadmate should cause players to feel something, but in reality it's completely meaningless, especially since dead team members can be revived. The harsh truth is that the only difference between playing with strangers and playing with AI is that strangers are marginally less likely to walk into doorframes and marginally more likely to revive you when you go down. Marginally. As well as the campaign, there are four adversarial multiplayer modes. The addition of computer-controlled zombies to the traditional deathmatch game type, and the ability to play as well-known characters from the series in the Heroes mode are intriguing twists on the standard formula. Nevertheless, versus games are plagued with the same gameplay horrors as the single-player campaign and unfortunately these problems are likely to suffocate players' long-term interest.

Raccoon City contributes little to the Resident Evil universe, and even less to the third person shooter genre. A handful of imaginative ideas tease at what could have been, but they are ultimately buried in an avalanche of substandard aesthetics, mechanics and storytelling. A scary experience indeed.

Four player co-op zombie killing is hardly an original concept so it would take something special from Resident Evil: Operation Raccoon City to really make a mark. The idea is sound; weaving the plot between the much-loved Resident Evil 2 and 3 should have provided the opportunity for some serious zombie-slaying nostalgia. Sadly, not only does Raccoon City fail to deliver on atmosphere, it's also a case study in poor design, testing and AI. One to miss.