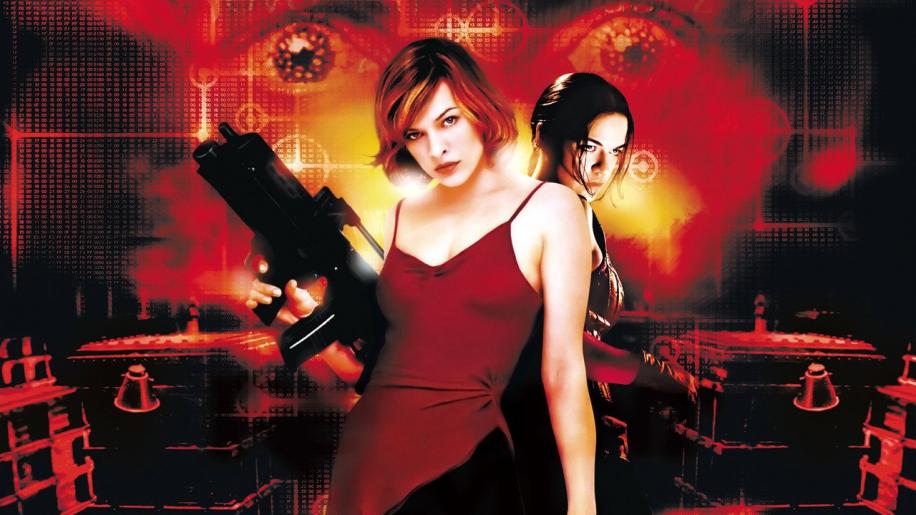 The first time I saw Resident Evil was at a preview showing in the States. I had heard absolutely nothing about the film, other than the fact that it was based on the popular video game. I had briefly played the games, originally called Biohazard in their Japanese home country, and they were arguably the definitive zombie games - bringing to your home a whole world of pain, blood, tension and utter desperation. The first of the series was predominantly set in a zombie-infested house and featured a lead heroine, Jill Valentine, who has to escape and evade - more than combat - the zombies: primarily because there were always more zombies than bullets!

The film starts just prior to the events in the first game, and appears to conclude sometime before the events of the third instalment in the game series. It also features only one character taken from the videogames, and that is not Milla Jovovich's lead heroine, Alice - although she does bear a resemblance to the game's Jill Valentine (who features in this movie's first sequel), or perhaps even the second game's Claire Redfield (who's in the third movie). Originally entitled Resident Evil: Ground Zero, which changed because of 9-11, this film sees the origin of the zombies (although they are never called that). As the opening coda states:

“At the beginning of the 21st Century, the Umbrella Corporation had become the largest commercial entity in the United States. Nine out of every ten homes contain its products. Its political and financial influence is felt everywhere. In public, it is the world's leading supplier of computer technology, medical products, and healthcare. Unknown, even to its own employees, its massive profits are generated by military technology, genetic experimentation and viral weaponry.”

These experiments obviously go horribly wrong, and have unexpected side-effects upon the dead. Deep underground, a hardened Umbrella facility is suddenly thrown into lockdown by a rather HAL-like artificial intelligence, in order to prevent the spread of the virus. An elite combat team is dispatched to investigate the so-called 'Hive', and they encounter Milla Jovovich's Alice along the way. Alice does not even know her name (and neither do we) as she is suffering from amnesia. As the movie progresses, however, it becomes evident that she has many hidden talents and the team soon realise that she is their best chance of survival.

As previously stated, I was lucky enough to see this before reading all the mediocre-to-negative reviews that it appeared to attract on general release. To this day, I just do not understand why though. Ok, so this is neither Oscar-winning, nor a hundred-million-dollar effects extravaganza, but it was a great zombie movie that really captured the claustrophobic feel of the video games: bullets soon become an issue, the activation of a switch always has an unexpected side-effect, and the zombies are relentlessly overwhelming.

“The T-virus is protean, changing from liquid to airborne to blood transmission, depending on its environment. It is almost impossible to kill.”

The casting was also excellent - Milla Jovovich's Alice is a not-too-distant relative of her character in the Fifth Element: a slight, innocent and vulnerable (and often underdressed) waif who is secretly and instinctively kick-ass. And she could probably carry the movie all by herself (especially with that red slip of a dress and knee-high boots) but thankfully she does not have to. The special ops team is led by the versatile Colin Salmon, who you may recognise as one of the MI-6 operatives in the Brosnan Bond movies. He is great, if a little under-used, and is ably backed-up by Michelle Rodriguez, who went from a promising start in Girlfight, through an entertaining Fast and the Furious and ended up Lost. Here, her gun-friendly kick-ass special ops team member is a casting dream come true, and not a million miles away from Vasquez in Aliens. There's also a typically mischievous role for Rome's very own Mark Antony, James Purefoy.

“Just one bite, one scratch from these creatures is sufficient. And then, you become one of them.”

Personally, I thought that Paul W.S. Anderson didn't do a bad job of writing and directing this film. I don't really understand why he gets slated so often - his Mortal Kombat interpretation may not be all that classy but it is light-years ahead of that Van Damme Streetfighter abomination or the abysmal Double Dragon flop. And what about Event Horizon? That was very effectively dark and came complete with Larry Fishburne, before he turned into pompous Revolutions Morpheus. Sure Anderson, almost, single-handedly ruined the Aliens and Predator franchise with his PG-13 combo-flop, but he may now be back on track with his Death Race remake and his interpretation of the Spy Hunter video game. No, I don't mind his vision of the Resident Evil saga, it may be more high octane than the game and it may not be particularly cerebral, but it is still a stylish, tense piece of suitably dark and jumpy zombie entertainment, thankfully popular enough to garner two more action-orientated sequels.

“You're all going to die down here.”