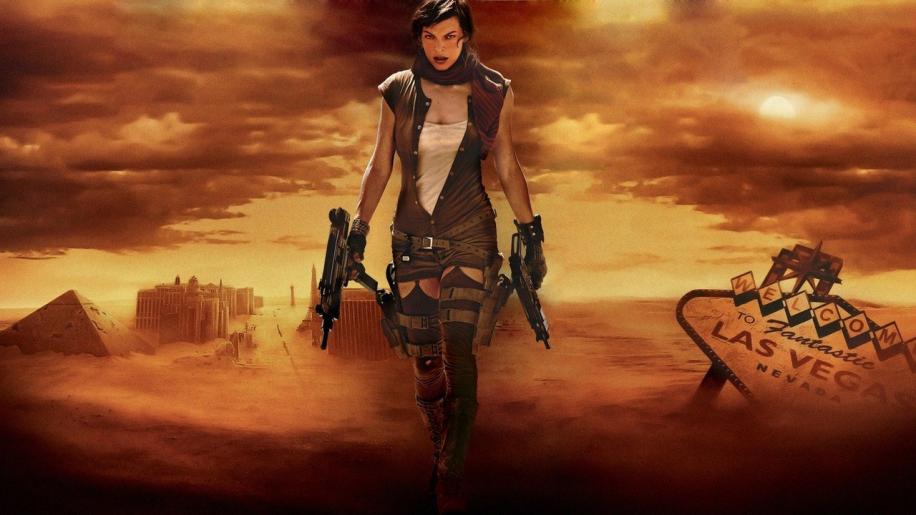 After the joy of previously reviewing the second instalment in this bafflingly popular film franchise, the third one wings its way through my letter box. Released in the UK on 18th February, this is one of the first discs to be Profile 1.1 enabled and it also marks a new director to the franchise in the shape of Russell Mulcahy.

This film continues from exactly where the second one finished. We thus have a rather clever opening sequence which references those training levels we often see in video games, before cumulating in a rather clever and bleak twist.

So far, so much better than the second film. And generally this film continues to show this improvement. However, credibility is stretched far too regularly here, and this begins with the first post credit sequences. The T-Virus, you see, has spread completely around the world in the short time between the second and third films. This means that mankind has all but been wiped out, leaving even more desiccated reanimated corpses than we saw in Apocalypse. Our heroes from the second film have decided to try and make it across the vast desert landscape that the world has become, and to set up for a new life in Alaska.

This gives this instalment a definite “Mad Max” vibe, as they all drive modified vehicles across this post apocalyptic landscape. Eventually, Alice (Milla Jovovich, as attractive as ever) will, of course, meet up with her pals and help them progress in their aim.

However, amongst all this, the Umbrella Corporation are still up to their nefarious ways, this time they have decided to dispense with the crappy special effect (named Nemesis) that they were working on in the second film, and instead breed a new race of super fast super strong zombies. Of course, they need Alice for this, so they are chasing our heroes across the desert eventually reaching a show down in a deserted destroyed Las Vegas.

This film is really quite different to the previous instalments and horror movies in general, in that it takes place during the day and out in the open. Mulcahy is a welcome addition to the franchise as well, introducing some clever shots and angles into the mix and definitely showing an affiliation with the universe that he is inhabiting here. The direction is certainly a step up from the second instalment.

Unfortunately, the film is still hampered by the fact that it cannot be, well, too horrific. The teen audience that the franchise is aimed at severely reduces the scare factor, and the videogame background just seems to constrict the material too much. However, this is infinitely preferable to the second film. The effects are better, the direction is better, and you still get to see Jovovich running around with very little on.

The Zombies are certainly better this time around, displaying a more desiccated and decayed look that works much better. We also get to see the zombie dogs making a welcome appearance. These are as effective as ever.

Unfortunately, the film is still scripted by Paul W.S Anderson, and this leads to some hokey dialogue - however (and it is difficult to put a finger on as to why) it does not seem to hamper this film as much as in the second. In this one, it seems to add to the cheesy fun that the movie presents.

To sum up then, this film is not too scary and not too horrific. However, it is smartly directed, and does attempt to do something different. It is a pure, brainless movie that tells a story of a half naked chick kicking zombie ass. And it is done in a far more enjoyable way than the second. Shockingly, I recommend not only to fans of the series, but to those who don't mind turning their brains off on a Saturday evening and breaking out the popcorn.