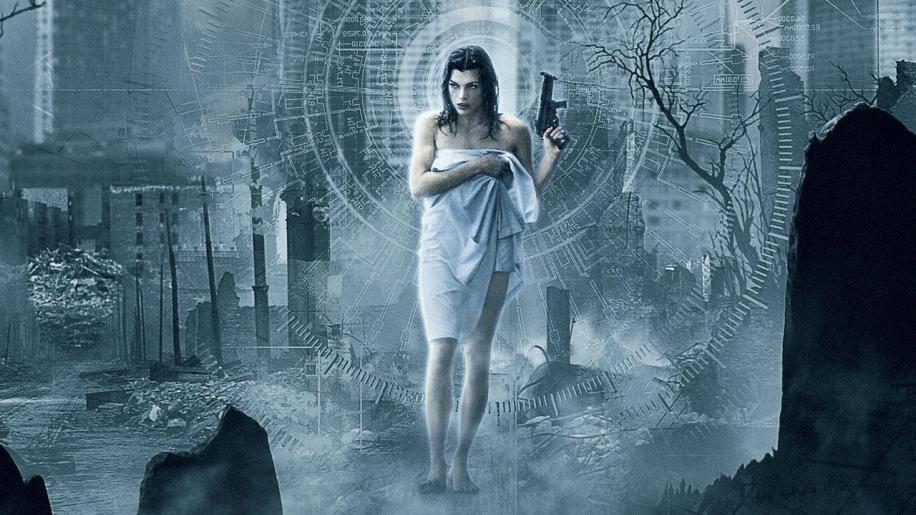 Resident Evil Apocalypse is the unwarranted, if expected, sequel to the moderately average Resident Evil. This sequel takes off almost exactly where the last movie finished and goes downhill rather quickly after that.

Hidden under Racoon City is a secret research station called The Hive. This is where most of the original movie took place and where a viral outbreak turned the inhabitants into zombies. The builders of this station, Umbrella Corp, decide to re-open the station in order to ascertain what went wrong. Of course, the virus escapes and begins to infect the blissfully unaware populace of Racoon City. It isn't long until the local police station is overrun, despite the aid of highly trained S.T.A.R.S. (armed police) officer Carlos Olivera (Oded Fehr). Ah, but who should come to the rescue but feisty and improbably nice looking disgraced S.T.A.R.S. officer Jill Valentine (Sienna Guillory) who seems to be the only member of this elite task force who can take care of herself. So much so that, while others wear subdued combat fatigues to help blend into their surroundings, Jill wears a startlingly vivid blue top, shorts and knee high boots (remind you of some other videogame creation, much?).

Rather than bring to bear on the situation Jill and her fellow S.T.A.R.S. officers, Umbrella lock them into the city to die. Then Umbrella releases something called Nemesis (Matthew G. Taylor), a walking tank of flesh with all the articulation and subtlety of a rhino with rickets. Then Alice (Milla Jovovich) arrives, from somewhere back in the first movie, to fend off even more zombies and such and presumably that Nemesis thing, too. In amongst all of this, there is a rogue scientist on the outside of the city trying to get Alice and co to rescue his daughter who went missing on the way to school before he was evacuated from the city, after the virus was released.

Confused yet? This movie stinks to high heaven, not just because of the patchwork storyline. Apocalypse fails because it has a very strong adherence to video game tradition. So, we have a game area map, provided by rogue scientist's laptop, showing the escape point and goals en route. We have an artificially cordoned off “play area” after Umbrella magically summon a 20ft wall that can surround a city the size of Manchester. Both lead women characters are the same, Lara Croft-esque, stereotype and may as well be the same person. We even have a character pecking order: Alice is better than Jill who is better than Carlos who is better than the other armed forces. It is like someone in the production team was sitting down to play some game and thought “I wonder how I can get this meaningless list of values into the movie? I know, I'll have Jill say 'Those were some pretty slick moves, back there. I know I'm good, but not that good.' Yes, that is a real piece of dialogue.

Then there is the Nemesis himself, the main antagonist of the movie, who is handled with remarkable ineptitude. The mechanic used to instil into Nemesis a foreboding presence is plucked from those early slasher movies. You know, the one where the victim runs like a scalded cheetah while the enemy saunters after them and still manages to keep up? Yeah, the one that is as old as the hills. This old-school take on the main antagonist does mean that RE:Apocalypse is mercifully free (comparatively speaking) of gratuitous CGI. The downside is that, because The Nemesis has so much full onscreen action, he is reduced to that most clichéd of horror staples: the man in a rubber suit. Which leads me to the main reason RE:Apocalypse is a pile of rubbish. It is not, in any stretch if the imagination actually scary. There are hammer horror flicks that have more menace. Hell, even the Phantom Menace has more menace and that movie never had any! Clearly, for a horror movie to have no actual horror content is something of an oversight, and one that cripples this movie.