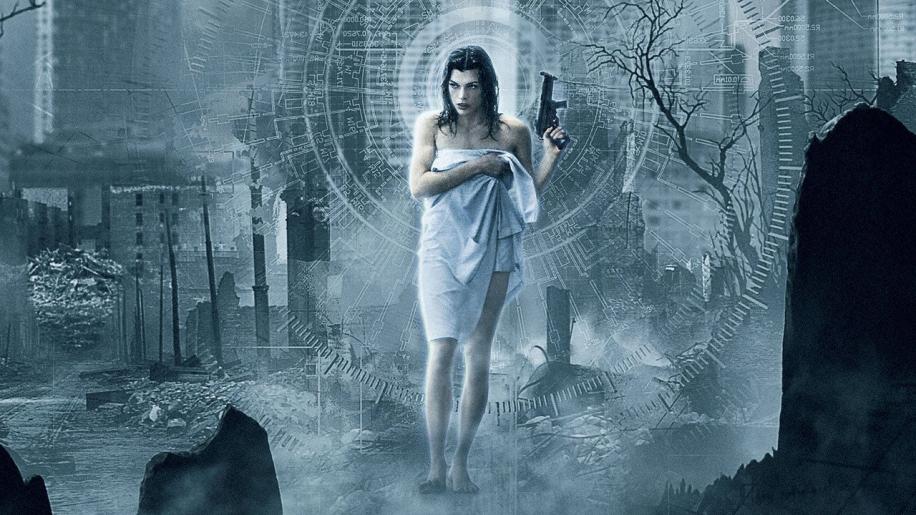 Biohazard 2: Apocalypse (AKA Resident Evil Apocalypse) is the sequel to 2002's Resident Evil film, an adaption of the best selling video game series of the same name. In Japan the games are known as Biohazard hence the name change of the movie for that market. The movie kicks off with a recap of the first where a viral outbreak in a secret underground laboratory leads to a horde of zombies and mutations wreaking havoc. A special agent called Alice (Milla Jovovich) who has been 'enhanced' (think bionic woman on steroids) survived the initial outbreak. In Biohazard 2 we find the contagion has now spread to the population of a city. Those that haven't got out of the rapidly quarantined city are now trapped with the undead. Alice finds out the city is going to be nuked by the corporation behind the virus. Her one hope of escape is to find a missing child, whereupon the father will provide a helicopter ride to freedom. Along with a few other survivors including a couple of specialist cops (Sienna Guillory and Oded Fehr), Alice must battle her way across the zombie infested city.

This is the first feature by director Alexander Witt, and alas it shows. It's an audio and visual assault on the senses, but nothing else. The director comes across like a little boy pulling wheelies on his bicycle in front of a girl he has a crush on. Wanting to impress but not knowing how. Not to put too fine a point on it, this film is weak. It's not totally without merit, although the acting is. It's just so... average. The filmmakers are too obsessed with dropping in irrelevant dressings from the games instead on concentrating on the mechanics of the film itself. Based on a video game it was never going to be subtle, but there's no reason why it couldn't have a decent script with fleshed out characters and people you want to root for. Witt the director, and Paul WS Anderson the scriptwriter just don't understand that video games and films are different media, just like books and films. What works in one may not work in the other. The characters in this film, unfortunately, act as if they are in a video game. You would think they are CGI for all the emotion they put in. It's painful. Jovovich is okay, she aquits herself adequately as the lead, although the script never asks her to do anything but scowl and shoot. She's just another instrument for the director to blow things up with. She's more or less a flesh and blood terminator. The rest of them are pitiful. I single out Sienna Guillory playing Jill Valentine, super cop, as particularly dreadful. She comes from the Liz Hurley academy of bad acting. But it's not all her fault. Her character wanders though the film in a strapless blue top, knee-length leather boots and a handkerchief-sized miniskirt. Yes, she looks great, but she also looks preposterous. She's in a warzone, a plague-ridden area full of cannibals where one bite or scratch can infect you with a fatal virus. So this allegedly intelligent, experienced, streetwise cop shows as much flesh as possible, as if she's dancing in a Britney Spears video! And as for her pout, and the quips she muses after killing something... Aaargh! With the right director and scriptwriter, this could have been a creepy, brutal horror film. A cross between 'Dawn of the Dead' and 'Escape from New York' with Twenty First century special effects. Instead we get yet another empty, flashy dud. Not one original idea is evident throughout the whole film. The director should understand that less is more. Between action set pieces (and there are some good explosions and gunplay) we need some build up of tension. Pyrotechnics, a bit of swearing, and even some zombie breasts do not automatically make a cool horror film. And for zombie fans... sorry, I'm afraid there's very little zombies on show here. Despite being billed as a zombie film, most of the fighting is between Alice's group and the agents of the evil corporation. When the sparse zombie scenes come along they are poorly directed and dull. Nearly all are shot at six frames a second giving that horrible strobe effect that you can get on a £200 camcorder from Dixons. The moaning and gurning of the zombies is childish instead of scary - “RRRRuuurrr!,” look mum, I'm a zombie! Most of the fight scenes have got the obligatory Buffy style kung fu moves, and I wish directors would give it a rest. Every fight is cut so fast that you barely get the chance to establish where the characters are in relation to each other. So it all becomes a flurry of limbs. And this is a movie that really does not have much respect for the intelligence of the audience; every one knows that you shoot for the head if you want to kill - especially where zombies wearing body armour are concerned! The 'professionals' in this film waste about a thousand rounds each hitting a body in the same place and don't learn their lesson.

In summary, if you take the perspective that films like this are so bad that they're good, you will have a good time. If you laugh at the ridiculous physics-defying stunts, idiotic dialogue, awful acting and corny plotting you will find this movie cheesy fun. But real horror junkies will have to look elsewhere for their fix.