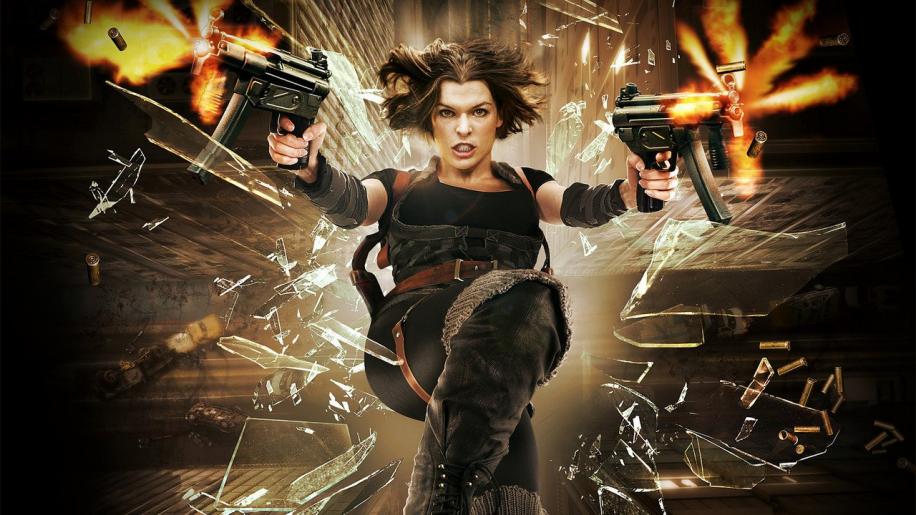 Like everyone, my first exposure to Resident Evil was with the Playstation game released in 1996. I have vivid memories of playing those first few minutes, seeing that first zombie come at you, always running out of ammunition, the utter frustration of being unable to save as I’d used my last type writer ribbon. This was a very different game, not one of running around shooting everything, careful consideration was needed, and because you had to think it meant the gothic horror element was ramped up, music, visuals, camera angles all amounted to the sense of unease. Make no mistake, this was a scary game, and, as far as I am concerned, no other game has ever managed that feat again, even in its own franchise. Since those heady times I’ve rather lost touch with it, I picked up and completed RE2, but that is where it ended for the games for me, oh, I bought my boys the last game so have seen plenty of the footage, but never actively played it. I saw Anderson’s first foray into the film franchise and, like many, was sorely disappointed, not so much with the poor game to film adaptation, but more with the total rip off of all things Romero that proliferated through the film. I did manage to see Extinction, but it made little sense and even less impression on me. So all this means I am coming to Afterlife with slightly less information than I need to get the full experience from it, but, as we shall see, I don’t think it really matters, the whole exercise is more about the look than anything else, and, as that is right, what’s in a story?

Afterlife starts up with a very brief prologue in which Alice explains how the T-virus, developed by the Umbrella Corporation, brought the dead to life and how that devastated the world. From there it’s right into the action as Alice (infected with the T-virus which gave her superhuman abilities!?) and her clones (?!) attack the Tokyo headquarters of Umbrella and are so effective that the entire plot has to be ‘purged’ (a sort of black hole device) with only the boss, Albert Wesker, and Alice escaping in an aircraft where upon Wesker injects Alice with an antidote to the virus, thus removing her powers. The subsequent crash sees only Alice miraculously survive (but we know that’s not true already don’t we?) to continue north to find the safe haven of Arcadia and hopefully meet up with her friends from film three. A couple of plot contrivances later see Alice and Claire land on top of a city prison besieged by the undead whereupon they make new friends, new enemies and are eventually invaded, since you can’t keep a good undead down can you, forcing an escape, only to discover that the safe haven is anything but (then we knew that was coming too didn’t we?) which leads to everything being left open for another inevitable sequel.

So much for story, basically there isn’t one, it’s an excuse for one set piece to lead into another adding a twist or two just to spice things up, but what is deemed important is the look – this film was thought out, designed and produced in 3D and everything about it has been made specifically for that purpose, the story is simply a by product of that effort. Apart from the one character trait of removing Alice’s super powers, which I am very grateful for, her invulnerability was such a conceit that it took everything out of the tension, there is simply no character development at all. Alice, in fact, is exactly the same in Extinction, minus the powers, which I actually liked, irrespective of the insanity of it – just because you used to have super powers why would you take on hoards of undead charging at you alone, a ‘Die Hard’ rope escape notwithstanding, and as for kicking a hulking undead monster with an axe bigger than you are ..? Run, Alice, hide, if bullets won’t slow it down your dainty heel isn’t going to is it? Alice is portrayed as the ultimate action heroine, invulnerable to pain, (nearly) unlimited bullets, absolutely no fear and more resourceful than an army of Macgyvers’. We’re meant to believe just because she has seen so much, she has the steel to soldier on and never stop – if you’re as small as Milla Jovovich, when you don’t have double sawn off shotguns loaded with quarters, you really are no threat, but this is the one conceit that we have to accept if the film is to succeed at all. She has been in it since the beginning, Alice is Resident Evil, and so she can do anything and survive everything, she doesn’t need super powers; she has the power of the writers’ behind her.

Each and every other character is as one dimensional as you can get, there is no attempt at depth given to any of them, even the introduction of Chris Redfield (Claire’s brother) is treated with a simple one line. There is no time taken to explore any relationship, catch up, love or companionship, the amnesia subplot notwithstanding – honestly change the name and it makes no difference to the film other than a shout out to the original, and last, Playstation games. Wentworth Miller’s characterisation of him doesn’t help, mind; gruff voice and wooden acting does not a ‘hard man’ make. Boris Kodjoe plays Luther West, one of the more fleshed out characters in the prison, when I say fleshed out, I mean he has more than one or two lines. Why is it, though, that all the characters are in two distinct categories? Kodjoe, like Miller, plays his respective part like he is already an established action star; hard steely eyes, tough mannerisms and quick one lines. It’s just so obvious. Unlike Kim Coates, who heads up the other category by being all slimy and double crossing. Again, it’s so obvious. Now, I realise that this type of film isn’t concerned with the group dynamics that could be set up in a confined space surrounded by monsters, and that action speaks louder than any amount of characterisation, but with such a frantic speed we simply do not care about the fate of any of these characters, thus, like Alice’s super powers, it evaporates any tension in the scene, because, so what if they get eaten, they meant nothing anyway!

I’ve never really forgiven director Paul Anderson for RE1, as mentioned above his blatant stealing of ideas from all Romero’s Living Dead films was just so obvious and, to me, it was insulting – I don’t care about homage, this was a repackage, jazzed-up-with-a rock-track to appeal to new kids that hadn’t seen any of Romero’s classic material. And the first scene in RE4, here, did little to enthuse me either, because the opening battle between the Alice clones and the Umbrella soldiers is a blatant rip off of the lobby scene form the Matrix, right down to the bullet time and crumbling plaster columns. In fact there is barely an original idea in the whole film, even down to the latest game nods (characters, ideas, even the final shoot out is a near shot by shot re-make), except in his approach to the 3D. Here, Anderson did impress me. He created a kind of hyper-real world that is so good in 3D that the 2D variant looks, somehow, wrong – and it does. The style is of a vivid rock video; loud music accompanying flashy visuals; in an attempt to beat you into submission, and, in this sense, it really works – absolutely style over substance your eye is drawn to and into the picture to such a degree that the story itself comes second place, in much the same way as Avatar does. Does that make them bad films, well yes, does that make them unwatchable, actually no. In fact, I’d go so far as to say RE4 is better than Avatar in this respect, it’s story is as much nonsense, but at least it’s ‘original’, it’s more a live action film that Avatar, the effects are as good as Avatar and, best of all, it’s half the time of Avatar. It’s a short, sharp, shock of a film that asks nothing of you except to switch off your brain and don’t ask any questions. Yes, there were plenty of elements happening within the film that made no sense unless you’d seen previous material, both film and game, but in the broad scheme of things the film isn’t trying to push the boundaries of what it’s trying to say, it’s just being what it is; loud, flashy and vapid.