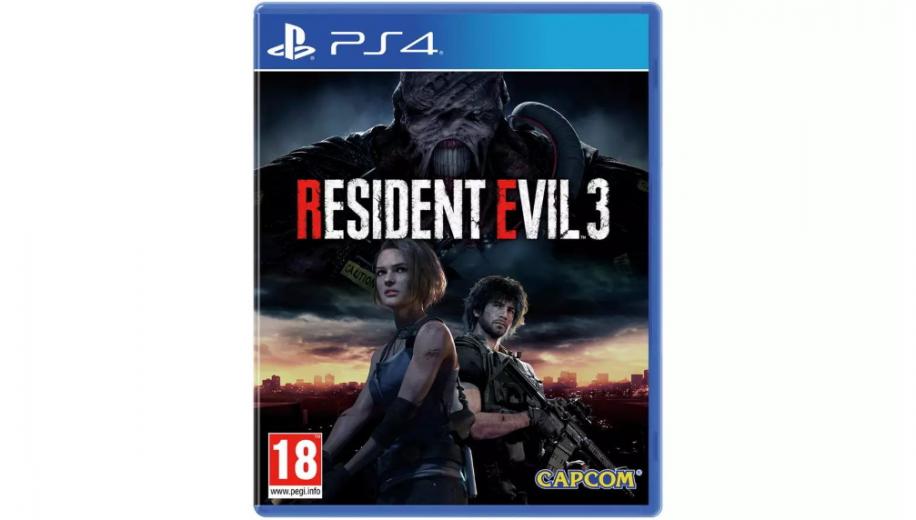 With everything that is going on in the world right now, Resident Evil 3's opening feels a little bit on the nose. It tells of a virus pandemic that has brought an entire city to its knees, presented via live action scenes that feel almost like you might have sat on the TV remote after starting the game and switched over to Sky News by mistake. Then, once the game starts proper, you're doggedly pursued by a physical manifestation of said virus – a disgusting flesh golem clad in caution-stickered bin bags – and tasked with escaping the city by avoiding both the big guy and the legions of lesser infected creatures, neither of which have any concept of social distancing.

Of course, this is more coincidence than an attempt at being topical, what with the original Resident Evil 3 being two decades old at this point, and pretty much every Resi game being based around the idea of a zombie-creating virus. But such parallels, however loose and accidental, are still worth mentioning, as for anyone trying to avoid the doom and gloom that has a stranglehold on media and social feeds right now, Resident Evil 3's backdrop might make Raccoon City feel a little too close to home right now. Interestingly, Capcom's third PlayStation era revisit shows off a third unique approach to remaking those old favourites. In the case of the original, 'bigger and better' was the play, the GameCube remake building on the structure of the original by adding new puzzles, enemies, and locations to make the Spencer mansion feel fresh while still feeling familiar. Resident Evil 2, on the other hand, proved to be a much more faithful recreation of the original game, edging only slightly away from the original's structure and letting its modern visual work together with classic game design to really capture the feel of the PS1 fan favourite.

Here, though, that gets flipped on its head. This so-called remake bears little more than a passing resemblance to its PS1 namesake, for better or worse – folks who remember the original fondly would likely have preferred to see Resident Evil 3 get the same kind of loving update as Resi 2, whereas those who join us in the belief that RE3 has always been one of the weakest games in the series will probably welcome a whole new experience in the same undeniably brilliant setting.

Bears little more than a passing resemblance to its PS1 namesake

Capcom's RE Engine remains one of the more impressive pieces of tech in modern console gaming, and Resident Evil 3 looks incredible as a result. Moving from the tight hallways and rooms of Resi 2's police station to the streets of Raccoon City offers plenty of opportunities for the game to flex its graphical muscles. The dark cityscape is peppered with neon signs and blazing infernos, the high contrast really making every scene pop thanks to HDR implementation that has been improved significantly since the last game, where everything looked washed out until you did some pretty serious recalibration work. Character models are exceptional as ever (even if lip sync sometimes feels off) and the vile creatures that stand in Jill and Carlos' way are some of the best in the series to date – classics like zombies and the ever-gross Lickers are pretty much exactly how they were in RE2, but it's great to see the lizard-like Hunters return looking amazing, along with some creepy new threats to face as well. Each has their own audio tell as well, their moans, growls, hisses and all the rest melding with some great ambient sound to help paint a grotesque 3D soundscape of what might lie around any given corner, although you can expect the sound of shattering glass or collapsing masonry to herald some of the more abrupt interruptions. As anyone familiar with the original will know, the ring leader of this motley crew of nasty bioweapons is the towering Nemesis. This jacked-up antagonist pursues Jill much like Mr X did Leon and Claire in RE2, although he's not quite as persistent or unpredictable as his hat-wearing cousin. More often than not, his appearances come at scripted times, although how things play out once he is on the scene can change drastically based on how you deal with him and what difficulty you're playing on. He's scarily agile, leaping around using his tentacles as grappling hooks or charging you like an enraged bull. Ammo isn't quite as scarce as it was in some of the earlier games, but trying to stagger him is still a major waste of time and supplies unless you're smart about it – luring him near explosive barrels (because videogames) or portable generators tends to be the best way to stall his otherwise relentless pursuit, and you'll sometimes even get an item for your trouble, too.

After Resident Evil 2's clever split between character scenarios (offering four slightly different playthroughs), Resi 3's more traditional setup always felt like a bit of a step back, and that holds true here as well. You still have two playable characters in Jill and Carlos, although the action cuts between the pair as the game progresses, Jill's sections having more of a classic survival horror vibe while Carlos' lean more into the action gameplay that came to the fore in Resident Evil 4. Puzzles are surprisingly scarce, and solutions and key item locations never change, making them utterly trivial beyond the initial playthrough (where they're already rather easy). We had high hopes for the unlockable Nightmare mode, which warns that item locations are shuffled around – sadly, the one thing it doesn't change is key item placement, so while it's fun to play around with endgame weapons and enemies here, progression through the game actually changes very little. This wouldn't be a problem were it not for the game's notable brevity. An initial playthrough is unlikely to take much longer than 6-7 hours, and subsequent runs with existing knowledge and unlockable extras can be completed in far less – our quickest run after five clears clocked in at just over an hour. There's decent encouragement to keep trying, mind, with collectibles in several flavours, difficulty settings to unlock, grades to chase, and an arsenal of useful extra items to purchase with points earned by clearing challenges. If you're not into games that only represent decent value if you're willing to run them several times or more, Resi 3 won't be for you.

That said, there is also the multiplayer side of things to be factored in, since Resi 3 comes bundled with the asymmetrical 4 vs 1 daftness that is Resistance. It's a weird cross between Dead By Daylight and Saw, with the Mastermind player springing deadly traps on a team of four survivors, who need only escape to be declared the winners. It's not quite as easy as it sounds, though, with the tight time limit taking a hit every time a survivor takes damage and the Mastermind throwing out hazards and creatures like there's no tomorrow. Both sides can level their chosen characters through continued play to gain access to improved abilities, though whether you'll take things far enough to see the more potent ones will remain to be seen. Resistance is kinda entertaining despite not actually being particularly good – it's a lot like the Resident Evil movies in that regard, actually, and some people will certainly get a kick out of it so long as they head in with suitably tempered expectations. It's quite fitting that Resident Evil 3 is the weakest of the three remakes Capcom has produced so far, reprising the standings of the original trilogy in the modern age. It's still damn good despite how short it might be, and that even works in its favour if you're willing to go for repeat runs, which can comfortably be done in an evening. It's as technically impressive as the previous game too, and there are plenty of killer set pieces crammed into its brief run time.

Those hoping for a faithful recreation of the PlayStation original may not quite so receptive to the creative liberties Capcom has taken here, but anyone else who doesn't mind a bit of repetition should enjoy tearing through this dark adventure a good few times. Multiplayer component Resistance feels a little tacked-on (it literally is, after all), but is still an amusing distraction all the same, and might yet grow into something bigger and better if Capcom sees fit to throw more survivors, Masterminds, and maps into the mix. All in all, Resident Evil 3 may not hit masterpiece status like its predecessor but it's still worth playing in its own right – a statement that proves just as true today as it did 20 years ago.