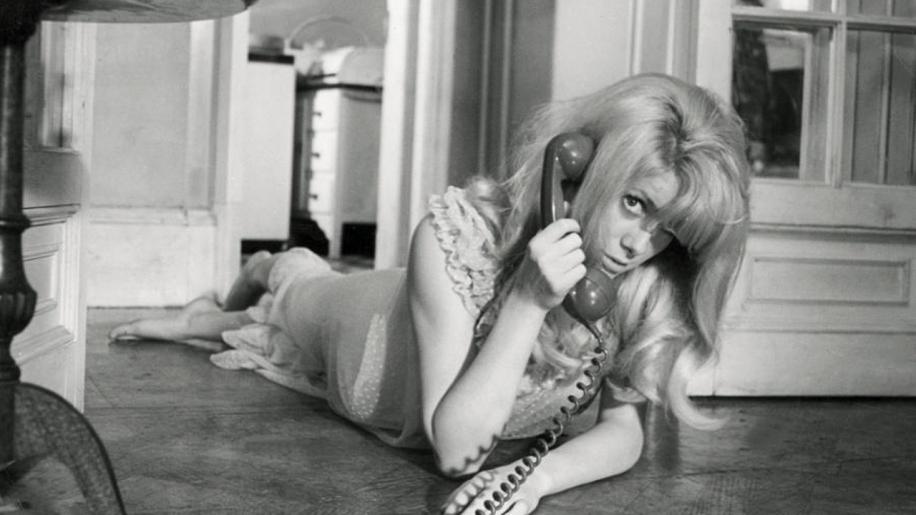 In 1965 Roman Polanski decided to make his first English speaking feature, Repulsion. From there he would go on to both write and direct a number of what are now regarded as screen classics, Rosemary's Baby and Chinatown being perhaps the two of most note but let's not forget his excellent MacBeth, the self styled The Pianist and a more than acceptable rendition of Oliver Twist. Roman Polanski can be a hit and miss affair, but I think it's fair to say that he has a style uniquely his own and, if nothing else, should be commended for that fact.

Set in the swinging Sixties Carole Ledoux (Catherine Deneuve) lives with her sister Helene (Yvonne Furneaux) in a spacious London apartment. She works at a local beauty salon (the first premises of Vidal Sassoon nonetheless) and seems to repeatedly day dream. She seems a little shy, especially around men, and has major issues with her sister's boyfriend Michael (Ian Hendry). These issues go above and beyond the pale, complaining that he leaves his toothbrush and razor in the bathroom and worried that he and her sister are about to take a holiday to Italy leaving her behind.

These issues seem at their most potent late at night whilst Carole can hear Helene and Michael making love in another bedroom in the apartment. It seems that there's something about Carole that we don't quite understand; she's obsessive about cracks, somewhat childish and has a history which the viewer is given the briefest of insights into.

Apparently part of Polanski's 'apartment trilogy' he yet again seems to have at the fore the concept of loneliness in an urban environment. Rosemary's Baby attacked this with gusto, and as for the final part of his trilogy The Tenant, it's impossible for me to say how this contributes to the whole as unfortunately I have not had the opportunity to view it. After taking in Repulsion though I can guarantee that I will purchase The Tenant sooner rather than later. Catherine Deneuve gives a stunning performance of a lost soul in a sea of humanity. She has family and friends around her yet cannot come to terms with the world she lives in, there is something that she's holding back. The viewer knows it, she knows it, but unfortunately those around her do not and this in part leads to her downfall. She plays this confused young soul as someone the audience reaches out to, someone with whom they perhaps identify with, and that is in the main due to her stunning performance, Polanski's direction in allowing the audience to feel what Carole is feeling and Gil Taylor's haunting cinematography.

George Cukor's remarkable 1944 Gaslight shows a woman descending into a madness which is orchestrated by her partner. Repulsion shows a woman descending into madness because of her own history and inability to communicate her feelings to the outside world. As good as Gaslight is, this film by Polanski is the best yet investigating the sights, sounds and feelings one might have on that journey into one's own dark thoughts. He uses the shadows of her apartment wellgiving the audience the odd shock here and there. Whilst commonplace today in 1965 these moments would have had the viewing public breathing in rapidly during the brief scenes where a figure is fleetingly seen or footsteps just barely heard. This is the inside of Carole's mind we are allowed to see and partake in, and it's a disturbing voyeuristic piece as ever there was one.

As was done for 12 Angry Men Polanski altered the set whilst filming, amplifying the feelings of loneliness that Carole is experiencing. The apartment in her own mind, and what we the viewer can see, is not just a cosy home, but a vast sprawling landscape to get lost within. At times the viewer wonders what is real and what is not and that feeling lasts right up till the final scene and beyond. We are aware that something has happened but in all honesty we don't quite know what, or to whom, and this film is all the better for it.

There are obvious signs of her hallucinations and obvious signs of some of the deeds she undertakes but in the end we are left wondering just how far she did in fact go. The blurring between sanity and madness is again explored in these shadowy areas and we are as confused as poor unfortunate Carole in some respect.

Taylor was used earlier, by Kubrick, on Dr. Strangelove and by Polanski again on MacBeth and he has an incredible vault of work to look back upon. Star Wars, The Omen, A Hard Day's Night and Frenzy with Hitchcock to name but a few. His lighting and close up cinematography in Repulsion allows the viewer to almost become part of the scene, pulling them into the frame. True, part credit must go to Polanski in insisting various angles were shot but in the end it's Taylor who produces the images that we're now seeing.

Polanski uses themes over and over, the one of confinement in his apartment trilogy and perhaps using the theme of child abuse both here and in Chinatown. The viewer is shown a stark family photograph, all participants gleefully enjoying the time, apart from one young girl. That girl we are led to believe is Carole and the look on her face is one of pure horror, disgust and repulsion. Is it this that has made her the way she is today (I for one certainly believe that even though Polanski refuses to explain any of his movies). Regardless of the whys and wherefores of Carole's descent into madness this is still an excellent piece of work. Almost a study of the human condition when your world collapses in on itself; the betrayal and insecurity you can feel.

The cast you will immediately recognise, especially Ian Hendry, Patrick Wymark and John Fraser but there's also a variety of stars in here that most will remember from British stage and screen. In some respects Repulsion is a look back on the mid Sixties in London, where men were men and the level of support they offered was to slap a woman around the face and tell them to “get a grip”. That aside this is a superb film from a film maker with highs and lows, and a film which without a doubt has to be recommended.