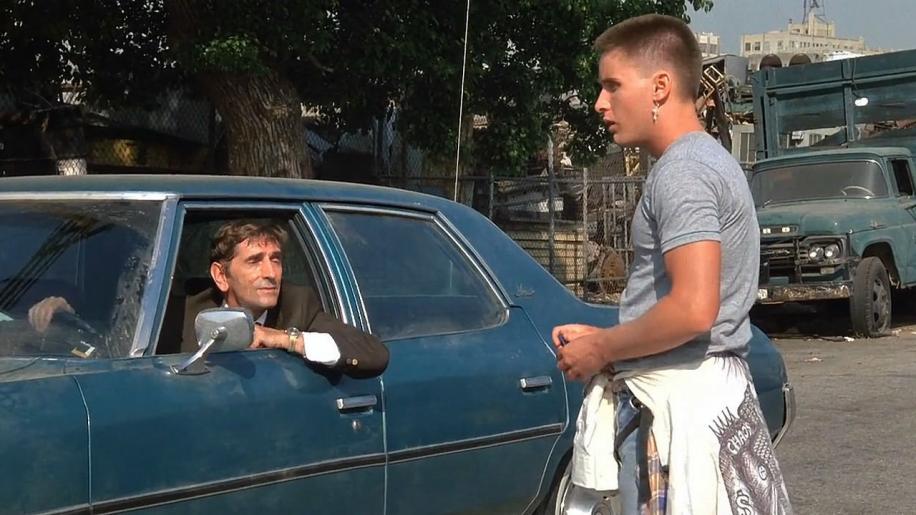 1984 may not seem the ideal year to catch the zeitgeist of the punk movement and use it to underpin a film, in the UK the Pistols had long since gone and we were reaching the end of The Clash’s comparatively long lifespan, but the scene in the US was still thriving. The American expression of the “have a go” musical ethos was still alive and well, particularly on the West Coast. Named as one of the quintessential LA films, Repo Man embodies everything the terms “punk” and “cult” could possibly be found to mean, and strangely enough it took a young British director – Alex Cox - to hold up this mirror to a West Coast brimming with angry young suburban white teens.

Percolating with quirky attitude, the story centres on Otto (a fresh faced Emilio Estevez), a dead end kid in a dead end job working for a local supermarket. His attitude soon gets him the sack and he finds himself at a loose end. Following the narrative arc of deconstructing a character before we’ve really met them, he then loses his girlfriend to a former friend recently out of juvenile detention. To cap it all off, his parents are two seemingly semi-lobotomized ex-hippies, stoned and entranced by a televangelist, a man to whom they’ve already given Otto’s final lifeline, the money promised to him if he were to graduate school.

It sounds pure pot-boiler, a gritty tale of the struggles of youth in an uncaring world, but it isn’t. Alex Cox takes us through a zany world of unrealistic characters, all of whom add up to one of the most absurdly funny and damningly satirical cult films you’ll see. And it all starts off with the chance encounter with Bud (Harry Dean Stanton), a man asking for a favour; unbeknownst to Otto, this soul in need is a repo man.

Repo men repossess cars, a job that Otto frowns upon when he learns the truth of who he’s just allied himself with. It doesn’t fit in with his me-against-the-world outlook. Now there’s a real temptation to overanalyse Cox’s work because as a so-called “punk” director there are traits associated with the more indie libertarian ethos. Normally I’d scoff at the thought of viewing a film through such a prism, like the Marxist essay on Star Wars, but Repo Man is so infused with anti-establishment angst at consumerist culture and Reagan era America’s faux-panacea for its troubled soul that it is hard to dodge the social commentary.

You can view the film as a message, but the beauty is it doesn’t try to beat you over the head with student-level musings about society’s ills and unrealistic leftist idealism. It takes a lot of the staples that the US punk scene’s song list and works them into a narrative, and then adds an extra level of crazy just for good measure. Otto’s adventure isn’t one of preaching but of poking fun, blackly humorous and off the wall but nevertheless with a kernel of truth in even the most ridiculous observations. Our protagonist, by way of a chance meeting with a girl, finds himself in pursuit of a Chevy Malibu, a car with a twenty thousand dollar reward on it. In its trunk, he’s told by the young girl belonging to an organization called United Fruitcake Outlet, are the bodies of three extraterrestrials (the mocked up photo shown to Otto was suitably lo-fi, showing three condoms with grass attached to them and photographed at an angle in black and white) taken off a US government facility by a mad scientist.

Each oddball character plays a part in Otto’s progression from simplistic angry young suburban kid to, well, that would be spoiling it. Bud plays the mentor figure, telling his protégé the repo man’s code – “I shall not cause harm to any vehicle, nor the personal contents thereof, nor through inaction let the vehicle or personal contents thereof come to harm” – a fine set of principles slightly undermined by him being spun out on speed. Miller is the mechanic come philosopher who may or may not be a sandwich short of a picnic and Lite is the badass of the rabble. Like a lead from a blaxpoitation flick, he helps Otto break every one of the rules of the code, doing whatever it takes to get a car, even if it means stepping into the firing line and discharging his nickel plated Colt .45 in the middle of the street.

Everyone is searching for the car in a “catch the pigeon” style: the repo men, or Helping Hand Acceptance Corporation to which Otto belongs, their rivals in the repossession business the Rodriguez brothers and some shady Aryan looking government agents. The car itself doesn’t really seem to matter though, it’s just a vehicle (no pun intended) for the narrative to trundle along, it could easily be a suitcase or a microfilm, the housing of the secret of what’s in the trunk only really takes on some significance in the final reel, when things go really fruit-loop.

Step away from the cartoonish high jinks and you’ve got a story of rebellion and self discovery that layers itself with humour, some subtle some less so, and a sound accompaniment to the music that seems to have built the atmosphere so well. The theme of beer runs throughout, the repo men are all named after them – Bud, Lite and Miller – and Black Flag’s TV Party is a fitting tune to crystallise the character of Otto in the viewers’ minds, a young male with “nothing better to do than watch TV and have a couple of brews”.

Otto’s friend Kevin (Zander Schloss, who would later go on to play with The Circle Jerks, the club band in the film) can’t help singing the tune to a 7-Up TV ad, yet when confronted knows nothing about it. Subliminal messaging mixed with the ideas of collective consciousness and a unified order of fateful events is raised by the mechanic Miller. Take his ramblings as a throw away comment of weirdness in an already strange film and you may start to tire of what you perceive to be overuse of obtuse script padding, but the eagle eyed will be justly rewarded for their diligent observation.

Repo Man fuses a Lynchian madness, a freedom of thought with a structured satirical dig at Reagan era America, the trappings of a society enthralled by consumerism and the generational shift post flower power. The ethos of the West Coast punk scene exudes from its pores, I dare anybody to watch it and not want to listen to the soundtrack or get out that copy of Damaged (Black Flag) you’ve not spun in an age. It’s infinitely quotable, infectiously mirthful and still as rewarding an experience as it ever was, now where’s my copy of Dioretix……