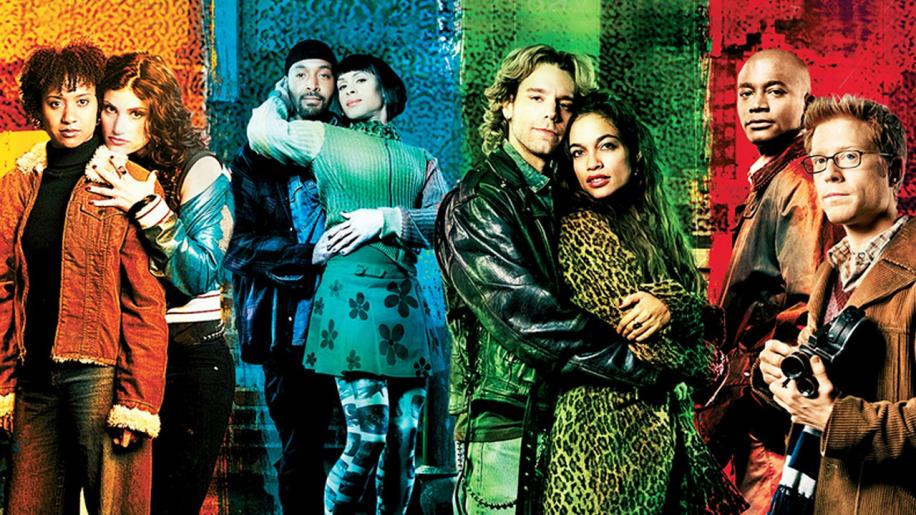 Musicals are a hard nut to crack. Telling a compelling story through song on paper, at least, is a simple task, but to tell it well and with vigour is something else. If ever there was a difference between the stage and film, the musical is the wedge. A stage musical is a wonderful piece of art, watching the actors/singers give it their all live is a spectacle once cannot easily describe. When transposing that same musical to film, that essence is lost, the audience are far further removed from the 'action' and thus the film has to employ visual tricks to hold the suspense, to continue the magic. It's a hard task, adaptations such as The King and I or The Producers work because they tell a story with songs adapting full on musicals or operettas are fraught with pitfalls, there are few to actually succeed, and even less to have tried. When it came to Chris Columbus to adapt Jonathan Larson's semi-autobiographical, celebrated and multi-award winning take on La Boheme, the musical RENT to the big screen, he had an uphill task. But by employing two thirds of the original members of the stage show, expanding the films remit to include wide locations and filming with a keen eye to the visuals, many boxes are ticked correctly, a shame, then, that something is slightly lacking with the end result.

The Story of RENT concerns a group of twenty something artists (be that actors, aspiring film makers or musicians) living in New York's Lower East Side in 1989/1990. Affectionately termed bohemians due to their drop out lifestyle, they are actually one step away from the street, struggling to pay the 'rent' or even feed themselves, while coping with their own tortured souls, their relationships, drugs and AIDS. Columbus' take on the stage play was to immediately make it 'more accessible' to the film audience. Essentially this means he altered some of the songs to dialogue, omitted some completely, and changed some of the scene orders. He also tried to add 'gritty realism' to the production. For the most part his take works, by altering the structure it comes across more 'film like'; there were some terrific juxtaposition between scenes, the montages too worked well within themselves, though the one of Angel and her fate was all rather quick. However, the production came off looking like a film, with songs, rather than a film musical and, for me this, is where the problem lies. I was constantly being pulled out of the 'moment' by great looking visuals accompanied by expositional songs, that were sometimes spoken, something wasn't right; it harks right back to the difference between film and stage. I am prepared to admit that the film may have caught me at a bad time, my subsequent viewing albeit with commentary, I felt more at ease with what was going on; like listening to an album that grows on you with time. Luckily the message of the musical is one of hope and even though the group suffer terribly with tragedy and adversity, their overall sense of self and eventual belief in each other brings them through. Luckily, too, the songs are, for the most part, pretty good, a cross between rock and pop; of course there is the occasional clunker, but they are all performed with gusto and all look good.

RENT, then, is a mile away from its stage counterpart, this is a blessing and a curse, since the stage devotees (termed RENT-heads) my find this adaptation too much to take, but it remains accessible to a wider audience that may wish to seek out and see the original stage production; this can only be a good thing.