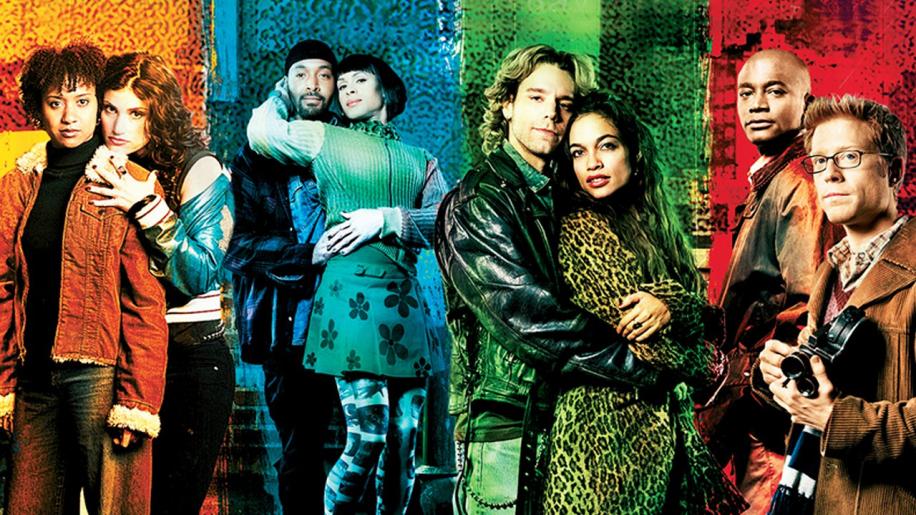 Some people cite the comedy as the most difficult of all genres to get right. After all, the difference between funny and nearly is such a fine balance. I reckon that Musicals, especially Broadway adaptations like Rent is, are far more difficult. Not only do all the songs need to measure up to the “irritation factor” of the listener, but there has to be a story somewhere which is nearly all exposition - the most boring of all movie elements. It's a wonder that musicals work at all, never mind one with such serious subject matters as Rent.
Rent, written by the late Jonathan Larson, is a work that is clearly semi autobiographical based on a number of friends and real life occurrences during his life. Rent tells the tale of a group of artistes struggling to find a decent income whilst avoiding the social impulses and cravings that were abundant in the 80's. The 80's milieu is a subtle thing that provides a slightly retro feel, but without the overtly clichéd references the 60's or 70's have. In Rent, the 80's characters are very identifiable to a modern audience, with contemporary references brought to the fore in a fresh and emergent fashion. As was the reality back then, AIDS was becoming an epidemic that the public could not ignore - no longer a shady acronym that could easily be brushed under a carpet of “not in this country” ignorance. Unemployment and homelessness was getting out of hand in the US with an increasingly “1984” style hard line on those that did not have a 9-5 job and a fixed address. Yet it was in New York where the budding actors, actresses and singers all congregated to make that one break that would catapult them to the limelight. Work was hard to come by, successful work infinitely more so. Such aspiring artisans were forced to shack up and share lodgings without heating, hot water and often food as they waited for that one chance.
So this rather bohemian situation tat many found themselves in is precisely what Rent is about. How does one cope with not being able to pay the rent; cope with artistic rejection when that is all you live for; cope with the rejection of homosexuality; cope with the reality of AIDS when one of your close friends dies of the virus? Such questions are certainly just as relevant today as they were then, which makes Rent an unusually potent mix. Whereas people can go and watch Cats or Evita or Phantom of the Opera, none of them will hit home with such a fundamental reality as Rent. Indeed Rent is the one musical that I have listened to that challenges the accepted norm, obviously at the chagrin of closed minded religious groups and ignorant types. There are parallels with recent BAFTA winner Brokeback Mountain, but whereas that movie has people trying to reconcile themselves with the idea of homosexuality, Rent just accepts this as a function of the modern world lending much more credence to proceedings.

Getting away from the serious stuff - what's the MUSIC like!!. Well there are a number of wonderful scores like the ensemble operatic opening with its rousing, soul filled lyrics bringing you into the musical nicely. The actual Rent number is also very well realised, especially coming from director Chris Columbus who also directed the first two Potter movies in such a prosaic manner. The Rent number is beautifully done with a night time New York back street lit up with folk throwing burning debris out of their windows as a rebuke “to the system”. Light My Candle is probably one of the best realised works of this kind I have ever heard, evoking so much with very little is quite astonishing.

However, Rent is not perfect by any means. For a start, while most of the music is very well done, “Over the Moon” is absolutely terrible. It epitomises all that many feel is arrogant and pretentious about new age artistry. Over the Moon has little in the way of meaning, method or rhythm and is told in a sporadic and incessantly brash manner. Compared with the rest of the movie Over the Moon is risible. Rent is also a very long movie at 135 minutes. I am inclined to say that the movie could do with being 15-20 minutes shorter as by the time you reach an hour and a half your brain has taken quite enough and is ready for a rest from sung exposition. Lastly, there is a death in the movie whose arrival is rather abrupt. There is precious little in the way of a steady build up, but rather a two minute montage during a number and then you're in the church at the funeral. I understand that this is probably to increase the shock value and highlight the notion “this could happen to anyone”. It just seems a little too fast for me.

So Rent is undoubtedly a success and surprisingly so on film. Uncomfortable subjects are handled well without compromise yet with accessibility lacking in many movies. That strength, despite the movie's undoubted faults is certainly worth the purchase of a DVD.