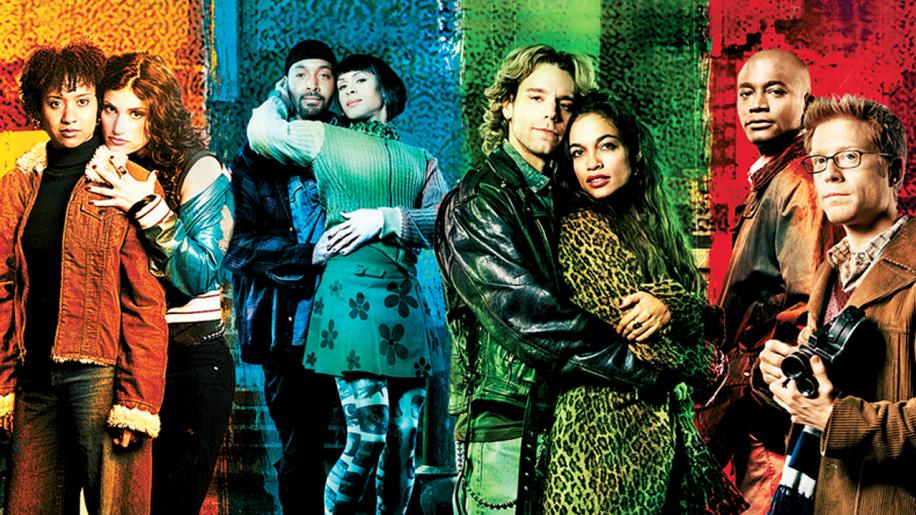 Rent was born on February 13, 1996 at the New York Theatre Workshop, The child of 29-year-old Jonathan Larson. Alas tragedy befell Larson, on the evening of 25th January 1996, the night before the first preview, he collapsed and died of a rare heart disorder. However his legacy strives onwards with performances still on Broadway and the production itself winning the coveted Tony, with Larson himself granted the Pulitzer for his work.

Rent has it's origins in Puccini's opera La Bohème and tells the story of a group of young, struggling artists trying to eek out a life and living in New York's Alphabet Village. All of the characters have their own personal issues to deal with, AIDS, rejection, drug abuse, lack of money and to cap it all, no Rent to keep a roof over their head. The film shows us a snapshot of these peoples lives over the space of one year and in that time we're introduced to Mark (Anthony Rapp), Roger (Adam Pascal), Mimi (Rosario Dawson), Tom (Jesse L. Martin), Angel (Wilson Jermaine Heredia), Maureen (Idina Menzel), Joanne (Tracie Thoms) and finally Benji (Taye Diggs).

The story is essentially told from Mark's eyes, a struggling documentary filmmaker who suffers from the rejection of Maureen dumping him in favour of Joanne. Roger and Tom both have AIDS. Tom's love interest, the transvestite street artist Angel and Roger's blossoming interest in Mimi both have to cope with this disease which was gaining speed in the streets of New York in the 90s. Throughout the film we see relationships develop under the cloud of this disease and substance abuse. In the end, after the year has past, the characters and the viewer are asked to look back upon the last year to learn what (if anything) they have gained from it.

Rent from the outset is a wonderfully presented musical. On stage it must be an enjoyable evening, and I for one after seeing this will certainly be looking out for it, on film though it comes across as somewhat watered down. It bravely takes on some emotive concepts and deals with them adequately but not as insightful as perhaps they should have been. Any one of the homosexuality, drugs or AIDS themes which it presents are difficult at the best of times to present individually. To have them all lumped together reduces the focus on each of them and the end result is something less biting than it perhaps could have been.

With the exception of Mimi and Joanne, Chris Columbus managed to get most of the original cast to star here in their original roles. Whereas when it was first staged some 10 years ago they were young fresh-faced early 20 year olds struggling to survive in their chosen lifestyle the addition of years leaves it askew somewhat. Some, Tom and Roger in particular, look out of place a little to be playing those same parts. In saying that though they give it their all, probably another tribute to Larson, singing is top notch, choreography wonderful, especially the restaurant and tango scenes. It is Columbus that we must turn to though to see why he was chosen to direct this particular film. Responsible for the all too sugary affairs of Home Alone, Mrs Doubtfire, Bicentennial Man and good input with his two Harry Potter outings I feel he just doesn't have a side dark enough to explore fully the self inflicted woes of drug abuse and consequences of AIDS not only on the sufferer but those around them. Someone like Rob Marshall who has direct experience of some of these issues would have been a much better choice in my opinion; he can certainly direct musicals as shown in Chicago, Taye Diggs appearing there of course as well.

In the end though I did enjoy Rent, I found characters with whom I identified and empathised, musical numbers which I really loved, "Tango: Maureen" and "La Vie Bohème" being my two favourites, and I would have no hesitation in recommending this to anyone really. Not everyone's cup of tea (ones Les Miserables is another's Rocky Horror) but still a good watch in my opinion.