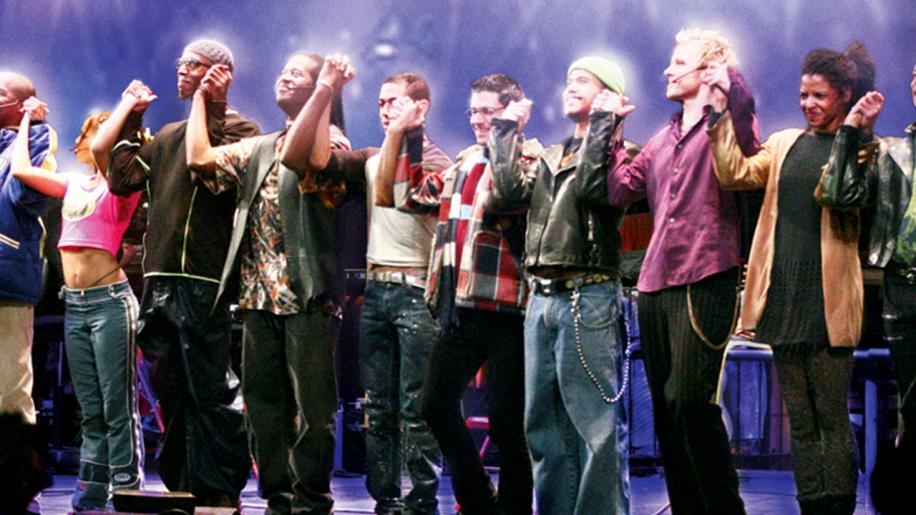 In January, 2008 I reviewed the movie of the musical Rent. Not something I thought I would have enjoyed but, in the end, I was more than pleasantly surprised with what I saw and made a mental note there and then to try and see the real thing on stage at some future point. Well that has not come to pass, the closest I have come is viewing a Broadway version which was filmed and subsequently released on Blu-ray. Parts of this review then contain my original feelings on this musical, however the stage version is markedly different in some ways, so this review hopes to cover those areas as well.

Rent was born on February 13, 1996 at the New York Theatre Workshop, the child of 29-year-old Jonathan Larson. Alas tragedy befell Larson, on the evening of 26th January 1996, the night before the first preview; he collapsed and died of a rare heart disorder. However his legacy strives onwards with performances still on Broadway and the production itself winning the coveted Tony, with Larson himself granted the Pulitzer for his work.

Rent has its origins in Puccini's opera La Bohème, telling the story of a group of young, struggling artists trying to eek out a life and living in New York's Alphabet Village. All of the characters have their own personal issues to deal with; AIDS, rejection, drug abuse, lack of money and to cap it all, no rent to keep a roof over their head. The film shows us a snapshot of these peoples' lives over the space of one year, and in that time we're introduced to Mark (Adam Kantor), Roger (Will Chase), Mimi (Renee Goldsberry), Tom (Michael McElroy), Angel (Justin Johnston), Maureen (Eden Espinosa), Joanne (Tracie Thoms) and finally Benji (Rodney Hicks).

The story is essentially told through Mark's eyes, a struggling documentary filmmaker who suffers from the rejection of Maureen dumping him in favour of Joanne. Roger and Tom both have AIDS and both have to cope with this disease which was gaining speed in the streets of New York in the 90s. Throughout the film we see relationships develop under the cloud of this disease and substance abuse. In the end, after the year has passed, the characters and the viewer are asked to look back upon the last year to see what (if anything) they have learned from it.

After watching this live version it is more than apparent why dedicated fans of the show have little or no time for the earlier released Chris Columbus film. That incarnation, whilst still covering the main themes of the production, is a little sterile by comparison. It is understandable to some degree though, making it slightly more accessible to the cinema going public, but the version we now have access to is the full on, warts and all, production which goes into much more detail about the lives, loves and utter heartbreak that the characters experience in a year in New York. The fact that many of the characters are homosexual and/or have AIDS is studied in more detail and it is probably these aspects which gets much better coverage in this version. I still say though that to get the absolute best experience from this then a trip to the theatre is a must. It's evident that the musical has an energy and intensity which must come across better, in a more tangible way, on stage.

The players are seemingly perfect for the parts they play and you can easily identify which actors are playing the parts from the movie version. Their voices come across loud and clear and it is apparent that all of them have a passion for this musical; a passion rarely seen in other works. Will Chase, playing Roger, and Michael McElroy, playing Tom Collins, both come across particularly well! Both having strong voices and both going through most of the emotional turmoil in the musical, they have more to actually get their teeth into. That's not to say though that the other cast members are slouches, as all of them have incredible stage presence.

There are a number of additional songs in this full version, and these are mainly convcerned with the emotional turmoil of the relationships or the pain the characters experience through friends and/or lovers' deaths. My favourites from the film are still my favourites this second time round; Tango:Maureen and La Vie Boheme but I did prefer the live versions of Light My Candle and Over The Moon .

It's somewhat difficult to film an actual stage play or musical. In the actual theatre you have a full view of everything on that stage. When filmed though unless the camera is static, almost emulating your seating position, you are at the mercy of the director of photography and sometimes you can miss some of the subtle nuances which occur in the backstage or off to one side; and to a degree this is what we have here. The camera roams around the front of the stage, usually tightly focusing in on the actor singing at the time. Whilst this certainly allows for an immersive experience, sometimes I do wish the camera had pulled back a little to show more of what was going on in the fringes. In the main though this is still an enjoyable watch.

For accessibility I would still recommend watching Columbus' film first. Then dive straight into this and enjoy the rough edges which Columbus trimmed from his version. I enjoyed Rent almost 18 months ago and now I have enjoyed this live version even more. A fantastic musical and a great way to watch it until you can see it for real.