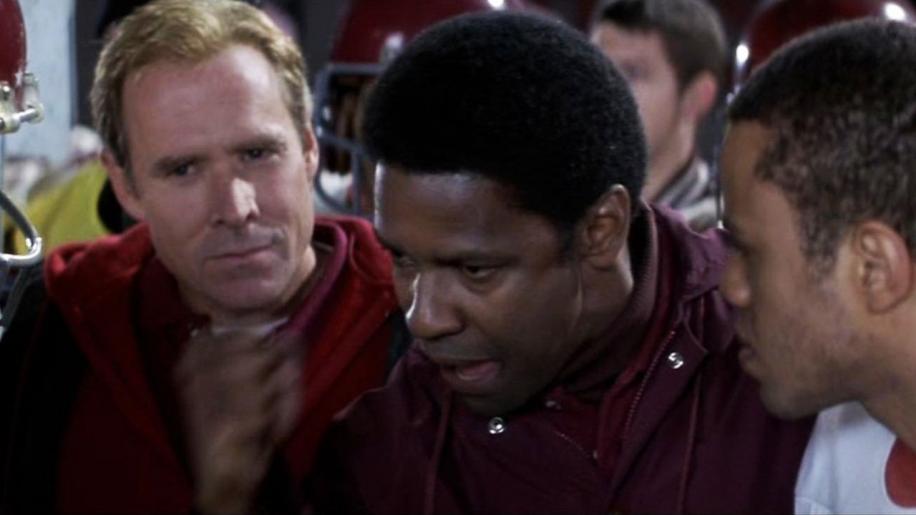 Remember the Titans is presented in its theatrical aspect ratio of 2.35:1 widescreen, with anamorphic enhancement for 16:9 displays. This transfer has points both good and bad. The good: black levels are deep and solid, flesh tones are accurate and colours (like the red of the Titans' jerseys) are generally well saturated. The level of contrast is excellent, coping well with the myriad night games and brightly-lit day scenes. The compression is pretty much transparent to boot. So far, so good.

Unfortunately Disney have a habit of creating rather dull live-action transfers that have a very 'digital' feel to them, and Titans is no exception. The image has a shallow appearance, partly due to the flat, uninspired photography, and partly due to the blunt fine detail response. The relationship between grain and fine detail is usually very organic; mess around with one and the other is affected. With Titans I couldn't discern any sort of grain structure (only semi-regular specks of dirt on the print), and the detail response suffers as a result, creating a very two-dimensional picture. Edge halos - another Disney speciality - are prominent on both horizontal and vertical edges, which also hinder detail reproduction. Overall it's a solid effort, but it falls foul of certain traits that should've been eradicated long ago.

Titans is presented in vanilla Dolby Digital 5.1. Like the lensing of the film, it's all very workmanlike, getting the job done without ever impressing. The mix is very front-centric, with cleanly rendered dialogue and adequate reproductions of various pop/soul hits spread across the front speakers. Maybe it's because I had a cold when listening to this, but the dynamic range seems very limited. The roaring crowds and crunching tackles come across as quite lifeless, with minimal back-up from the rear and LFE channels. Not having heard the DTS on the original disc I can't say whether it would've made a difference, but this Dolby track is distinctly average. The cover also makes mention of a French language track, but there is no such track to be found on the disc.

The extra features aren't exactly generous on this disc, with three paltry featurettes and four deleted scenes. Denzel Becomes Boone is a six-minute glimpse at the real Boone and how Denzel approached the character, featuring interviews with both men. Beating The Odds is another six-minute featurette, this time looking briefly at the genesis of the film with insight from writer Gregory Allen Howard, producer Jerry Bruckheimer and even the chairman of Walt Disney Studios. Remember The Titans: An Inspirational Journey Behind The Scenes is a twenty-minute ABC TV Special, featuring plenty of bland sound bites and clips from the film, although there are interviews with the real-life Boone and Yoast and players from that famed '71 team.

The Deleted Scenes are an odd mixture, with two of the four scenes (the sugary 'Sunshine Strikes Back' and 'Friends Don't Come Easy') actually featuring in the main body of the film. Strange to put them in this separate section as well, although this does partially notify us as to what has been added to the film (there are no other indicators of what footage was reincorporated). The scenes are presented in anamorphic 2.35:1 widescreen and with Dolby Digital 2.0 audio, and they add a few extra touches of character development but nothing ground-breaking. There were two more deleted scenes on the original DVD that have been omitted here, but that's because they're back in the film. So why include the other two reinstated scenes in this section?

All of the above features have been ported over from the original DVD with no embellishment, making a mockery of the cover's claim of “all-new” bonus content. No theatrical trailer is included, save for the sneak-peeks of other movies that automatically start up when you first play the disc, although they can be skipped. They are for Pirates of the Caribbean 2, Chronicles of Narnia, Glory Road, and Eight Below. Maybe these qualify as the “all-new” bonus content? The two commentary tracks from the original DVD (real-life Yoast and Boone on one; director, producer and writer on the other) have not been included, which is not really surprising considering this is a different cut of the film. But why not record another one with players from the Titans for this new DVD, or at least try and splice together the best bits from the two original tracks? How about a historical documentary that lays down the facts behind the film? Basically the quality and quantity of the extra features is sorely lacking and they don't do justice to the achievements of the Titans.

Remember The Titans: Director's Cut is another in a recent line of unnecessary pre-HD cash-ins from various studios, in this case Disney. The film is a competent, if somewhat predictable look at how a high school football team helped a community to overcome racial tensions, with the extra scenes adding little to the proceedings. The audio/video quality is merely adequate, and the extra features barely rise above the level of 'fluff'. Some exclusive content wouldn't have gone amiss, and sadly the DTS track, two audio commentaries, theatrical trailer and THX-approval from the first DVD didn't make the grade this time around. What with the deleted scenes mix-up, missing French audio track and cover art that's nearly identical to the original DVD, this re-release reeks of laziness. If you like the film, pick up the original R1 release instead.