Some memories are worth more than others 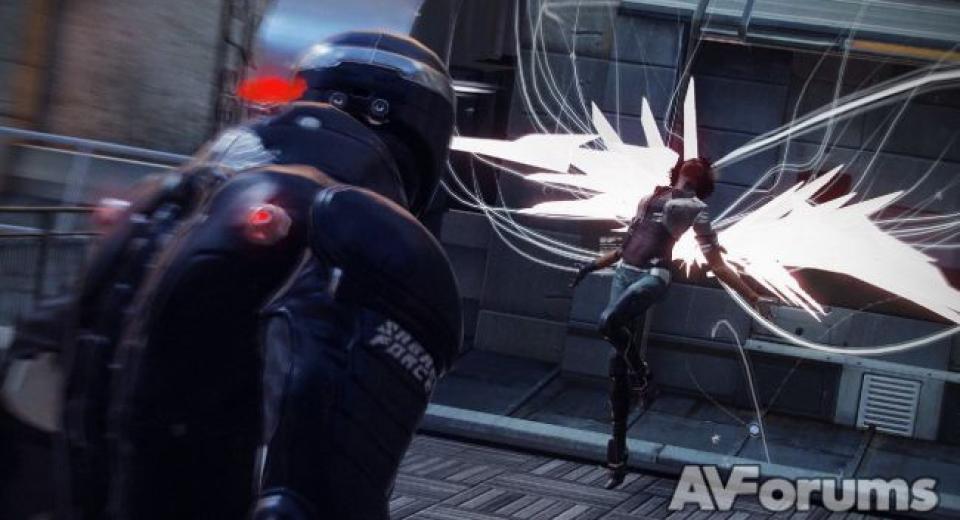 The year is 2084 and the world has been revolutionised by the invention of the Sensen; a memory storage device which takes the current obsession of documenting every aspect of our daily lives on the Internet to its extreme. Your Sensen allows you to sell, share and even delete your memories. Some have overdosed on memories turning themselves into sub-human leapers who infest the depths of the city. Meanwhile the Memorise corporation has managed to fully realise an Orwellian future bending and controlling society to it's will.

You play as Nillin; a member of the Errorist movement who are trying to loosen the stranglehold of the Memorise Corporation. Nillin doesn't know who she is, she doesn't know why she was in line to have her brain formatted and with the help of the voice in her ear known as Edge; she embarks on a voyage of self discovery around the spectacularly realised world of Neo Paris. You spend a lot of time traversing the world, whether it's leaping from ledge to ledge between the opulent roof tops or climbing pipes and ledges in the dingy sewers. Remember Me manages to craft a vibrant world which is a wonder to inhabit. Some more freedom in roaming would have been preferable but as it is you are tightly funnelled down a scripted corridor with the parkour elements holding your hand far too tightly, ledges and the path forward are clearly marked removing any sense of adventure and discovery as you simply follow the breadcrumbs to the next combat encounter.

Combat which; it turns out; is the foundation of the game. Claiming the game was misrepresented is taking it too far but pre release material and the entire premise of the game implies the experience is largely about remixing peoples memories. Nillin has a unique ability to not only hack into and access memories but also change them, often effecting them in a major way. A target's motivations and consequently their actions may be changed once you do your thing and "change their mind". These sequences are impressive, as you forward and rewind through a person's memory like a tape; you catch glimpses of elements you can affect. Move a glass here, put a teddy bear there or sometimes much more sinister changes like removing the safety from a weapon. The combination of your actions can change the memory in several different ways which you must experiment with to achieve your objective. It is a fun and completely unique experience which is doled out in criminally meagre morsels with only a handful of them throughout the game.

Take away these brief nuggets of innovation and you are left with a third person brawler. Admittedly they have gone the extra mile to create a combat system which is more than just an exercise in button mashing. The timing of button presses is very deliberate as it forces you to hit the next button in the combo as the previous move is being executed, you can use A to dodge incoming attacks and then continue your combo once you have dodged out of the way. The Combo Lab allows you to customise your move set, giving you the opportunity to insert "Pressens" or moves into combos which can grant you health back, deliver extra damage, reduce the cool down of your special abilities and let you chain combos together. The almost staccato nature of the combat and this DIY system work well in tandem, you will learn to hit your combos in sequence because you have to in order to recharge your abilities quickly.

The most useful of Nillins abilities are the S-Pressen moves which you gather throughout the game, each has its own cool down time and requires focus to activate. Focus is gained by both being hit and hitting enemies, they offer some spectacular abilities ranging from doing away with combos and letting you deal massive damage for a short period, allowing you to stun all enemies or plant a bomb before diving to safety. These are not only the most useful and devastating moves they are also the most visually appealing. Nillin will sprout digital wings, the screen will pixilate and glitch when she is low on health and the music will change tempo in an upbeat techno soundscape which fits the digital world well and accentuates the Neon flourishes delivered throughout the combat.

Enemies vary from the cannon fodder leapers through riot clad soldiers all the way up to mechs and some interestingly conceived bosses. Combat requires a nice rhythm of hitting your combos to build your focus and then unleashing the appropriate S pressen for the situation.

As deep as the system is though, the motivation to spend a lot of time in the Combo Lab putting together elaborate chains of moves is minimal, once you have created 3 combos one for health, damage and cooldown there is little reason to make the system any more complicated. This then turns the combat into a rather repetitive affair which more often than not becomes rather tiring. Combat is broken up with the aforementioned parkour punctuated with the voice in your ear delivering timely plot points and objectives. The occasional puzzle will be inserted every now and again but it largely feels like they exist simply to add a little challenge into the borderline insulting traversal. Equally the Remembrane sequences where you follow in the footsteps of another memory seem to be little more then a conveniently thematic attempt to pad out the monotonous gameplay.


Which is entirely Remember Me's problem, all of the gameplay elements continually get in the way of the fancy memory remix sequences. As well thought out as the combat system is; it never manages to stop you hoping the next memory mashup is waiting round the next corner. When it becomes clear that the distribution of these sequences is scarce the patience required to complete the poor traversal and tiresome puzzles wears thin quickly.

Which is a shame as the world of Neo Paris is one I would glady return to with a little more freedom and a few less buttons prompts. In the end though it's barely worth wading through the mediocre gameplay just for the innovative cherry on top; even though its pretty damn sweet.