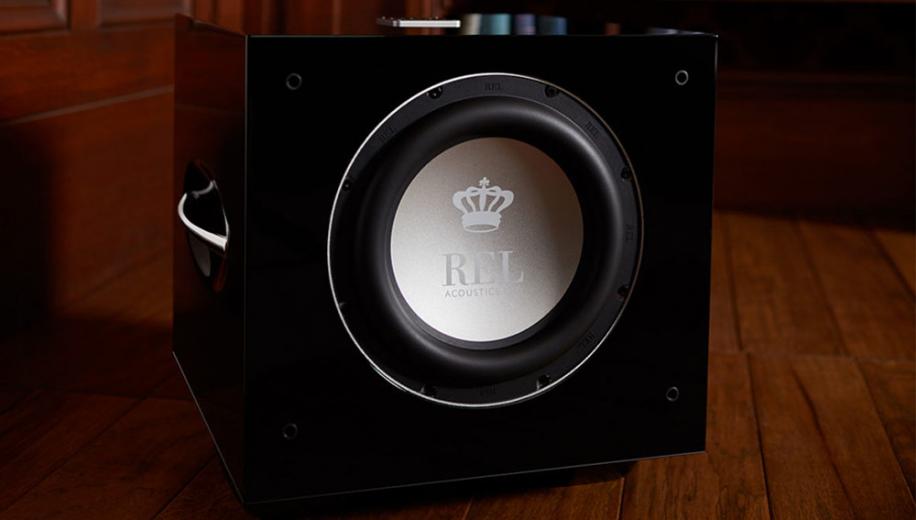 The REL S/510 is the entry-level model in the company’s mid-range Serie S line-up of subwoofers. This sealed unit sports a forward-firing 10-inch driver, combined with a 12-inch downward-firing passive radiator for deeper bass extension.

Like its big brother the S/812 it has a revised cabinet, sits on rails instead of feet, uses an upgraded 500W NextGen5 amplifier for more power, and has a redesigned ultra-lightweight ContinuousCast alloy cone to handle the increased excursion.

An improved filter allows the LFE channel to deliver greater output, while the high-level and low-level inputs use a new PerfectFilter. This redesigned sub can also be stacked up to three units high, if that’s your thing (and REL would certainly like it to be).

The REL S/510 looks identical to its big brother, with the same redesigned cabinet that's lower, wider and deeper. It sports similar dimensions to the company’s Reference Series, the build quality is superb, and the overall design is undeniably eye-catching. In fact it really is too pretty to hide away in the dark corner of a dedicated home cinema.

There’s a gunmetal grey badge on the top and chrome handles at the sides, which are both attractive and practical, allowing you to move the S/510 on your own. The 10-inch gunmetal driver proudly sports the REL logo, but if you’d rather cover it up there’s also a sizeable black fabric grille. The result is a high-end sub with class and authority.

REL has replaced the usual feet with ultra-stable rails that serve two purposes: first, they provide better support; and secondly, they cantilever the main cabinet forward allowing it to seemingly float in space. The S/510 offers a choice of two finishes: gloss piano black or gloss white lacquer. It measures 400 x 410 x 464mm (WxHxD) and weighs in at 31.7kg.

The REL S/510 has all of its controls located at the rear, and here you'll find a main power switch and a connector for the three-pin power cable, along with two more switches for 'always on/standby' and '0-180˚ phase'. There are also knobs for high/low and LFE levels, and one for setting the crossover.

The REL S/510 boasts a 20% increase in power thanks to NextGen5 Class D amplification previously used in the company’s higher end models. The power source is continuously rated at 500W, and REL also employs PureTheatre filters that were first used in the HT/1508, and these allow the sub to deliver LFE effects without breaking a sweat.

There are high- and low-level inputs for a high-end two-channel music system, as well as a multichannel home cinema. The increase in power necessitated the development of an all-new circuit termed PerfectFilter, which performs two functions: extending the response of the extreme low end frequencies, while simultaneously opening up the middle and high frequencies of the system.

The S/510 uses a forward-firing 10-inch driver with a lightweight ContinuousCast alloy cone, and an ultra-lightweight backing of pure carbon fibre that's been strategically placed at the rear to stiffen and strengthen it, while also eliminating reversion. This prevents the back wave inside the cabinet from interfering with the projection of bass into the room.

There’s also a downward-firing 12-inch carbon “SuperProgressive” passive radiator that uses a new design to produce extremely long travel allowing for very loud output while retaining the variable stiffness of its suspension. This enables the S/510 to act like a sealed-box compact 12-inch design at low volumes, but a 14-inch design at its limit, thus helping deliver deep bass down to 20Hz (-6dB).

The REL S/510 is easy to set up and, in terms of the connections, you have a choice of using the high-level or low-level inputs, including a mono LFE channel. The high-level connection ensures the sub receives exactly the same signal that is being sent to the front left and right speakers. This means the character and tonal balance of the bass from the main speakers are reflected in the bass from the subwoofer, resulting in a more integrated approach for music that results in faster bass

The high-level input is an unbalanced dual channel (stereo) input that uses a professional 'touch-proof' Neutrik Speakon connector (REL includes a 10m cable). You attach this to the sub, and use the three wires at the other end to connect to the main left and right terminals on your amplifier: red wire to the red right terminal and yellow wire to the red left terminal, with a black wire that can be connected to either black terminal.

If you're installing the S/510 in a home cinema setup then you're more likely to use the low-level input. You can either use stereo RCA connectors to connect the left and right output on your amplifier to the left and right input on the sub or, if your receiver or processor has a dedicated sub output, you can use the balanced XLR or RCA mono inputs. The latter is the most likely connection for the majority of home cinema setups.

Then all you need to do is set the phase, crossover and level controls correctly (depending on the kind of system you are running and how it's set up). The only other setting is the switch for ‘always on/standby’, which you can set depending on your preference. If you choose the latter, the S/510 will automatically turn off after 30 minutes without a signal and will switch back on once a signal is received on an input.

There's often some experimentation when it comes to positioning a sub but the better you know your room, the easier it is to avoid any major issues. For this review, REL provided two S/510s, which were placed at the front of the room on the left and right hand sides. The handles and rails on the bottom made installing the two subs much easier, and they were tested using the high-level and mono LFE connections at different times.

The S/510 is designed to be stackable, thanks to special fixtures and included metal plates. You can safely stack and lock multiple subs up to three units high, and run a total of six in two stacks. If that sounds crazy, REL claims there is logic in its madness. In the real world, bass has width, depth and height, so by stacking these subs, you create a bigger bass presence from a smaller footprint. The two units in this review were used in a stereo configuration, rather than stacked.

To kick this review off, there was no better place to start than the opening bass notes of Edge of Tomorrow. The presence of the two subs is immediately apparent, creating a balanced low-end soundstage at the front of the room. There's no question the S/512 goes deep, and it had no problem hitting that low-end signal that accompanies the film's opening credits. The dual system provided plenty of headroom, and thus allowed for even greater extension.

Another great demo scene is the Cataclyst bomb sequence towards the end of Ready Player One. As the bomb detonates it sends a massive wave of deep bass out across the room, and hitting with a force you can actually feel. It’s a visceral low frequency experience, and while not quite 'brown noise' it certainly sorts the men from the boys when it comes to subwoofer. The two S/510 units did an admirable job of handling all that bass, controlling it and delivering it with skill.

While the S/512 can’t go quite as deep as the S/812 and it's not as powerful, the difference was minimal in testing and the smaller unit certainly held its own. The S/510 is just as musical as its bigger brother, and if anything it's slighter faster, and has a touch more response. Rocketman revealed a tightness to the sub's bass response, and there was also a nimbleness to its delivery.  With the two subs working in unison, they both created a powerful front soundstage.

The S/510 is powerful, but also fast and responsive. If you use two, the result is a tight and balanced foundation of bass

There's a driving intensity to the opening attack of Saturday Night’s Alright for Fighting, and the drums hit with a precise percussive kick that propels the song forward. That same sense of pace is evident during Elton’s famous US debut at the Troubadour, as 'Crocodile Rock' raises the audience... literally. The two subs really sell the thump of everyone coming back to earth, and weave their way through the bass guitar and drums with an elegant agility.

While it's important that a sub retains speed, deftness and musicality, most of us want it to give movie soundtracks the seismic impact we expect from a modern blockbuster. Midway is a great example, with the titular battle providing ample opportunity for the two subs to deliver an epic infrasonic soundstage. The anti-aircraft fire is delivered with a thumping bass hit that’s closely followed by a secondary impact caused by the flak pounding the swarming aircraft.

The two subs not only produce a powerful low-end foundation, but balance out the bass delivery. As a result, despite the increased dynamics and deeper output between 20 to 35Hz, it’s impossible to localise and simply overpowers you. This is especially true when a US plane bombs the Japanese carrier Hiryu. Its bomb penetrates the flight deck, causing a chain reaction of explosions that erupt through the ship, sending shockwaves of bass across the room.

The REL S/510 is an excellent subwoofer that's beautifully designed and fantastically well made. It's also an impressive performer, delivering exceptional bass in a tight and controlled fashion. It's not quite as powerful or as deep as the larger and more expensive S/812, but it comes very close and if anything it’s a bit faster and slightly more responsive. The REL S/510 isn't cheap, and it would be nice if it included a remote control, but otherwise this sophisticated sub is hard to fault.

The obvious alternative is the excellent SVS SB-3000 which can be picked up about £500 less. This sealed unit has a 13-inch driver combined with 800W of Sledge amplification, resulting in subwoofer that delivers a massive amount of bass from a relatively small footprint. The delivery is controlled and precise, and while the SVS doesn’t have the connectivity of the REL, it does come with an excellent smartphone app.

At a fraction of the cost, the BK Electronics P12-300SB-PR has to be considered a serious alternative. It uses a forward-firing 12-inch driver and matching downward-firing passive radiator, along with a similar connections that include high-level inputs. The S/510 is prettier, better made and boasts more power, but the BK can give it a serious run for its money in terms of bass extension, and it's hard to ignore a saving of over £1,400.