A polished performance in more ways than one 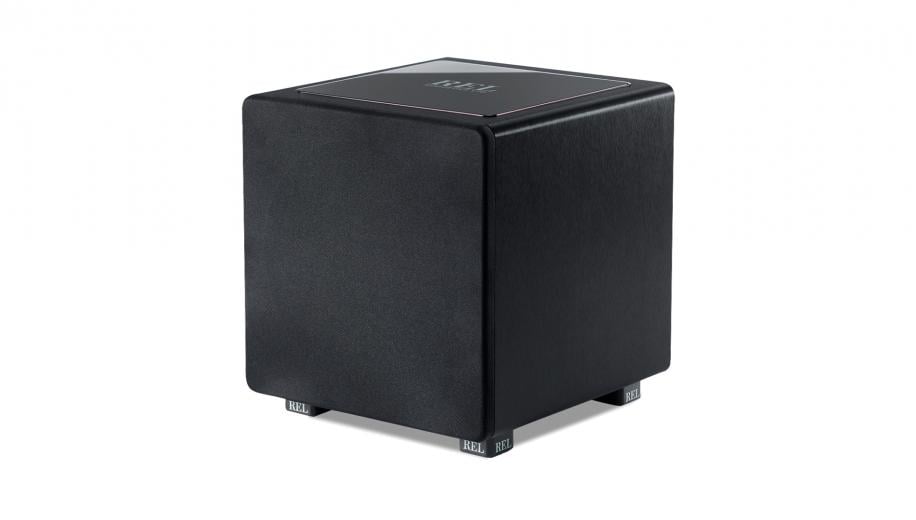 The REL HT/1205 is the company’s mid-range home theatre subwoofer, forming part of the rather pretentiously titled Serie HT. It sits between the entry-level 10-inch HT/1005 and the new flagship HT/1505 Predator (fantastic name) with its massive 15-inch driver.

The Serie HT drops the high-level input for which the company is justly famous, opting instead for a simple LFE input that’s specifically designed for use in home theatres – hence the HT. According to REL, the range is intended to deliver a dynamic and affordable home cinema subwoofer.

The HT/1205 uses a sealed enclosure, a forward-firing 12-inch (300mm) CarbonGlas driver, and a 500W Class D amplifier. The feature-set is fairly light, in order to keep the price down to a reasonable £699, but REL adds to the value by currently including the useful HT-Air wireless transmitter.

The HT/1205 looks identical to the other two models in the Serie HT range, with a simple cube design and solid MDF construction. It uses a high-grade, horizontally oriented line-grained composite to wrap the entire cabinet, which is finished in black but keeps the fingerprints to a minimum. It's a no-nonsense approach, and despite its size, this sub should be fairly unobtrusive in a home cinema or dedicated room.

The top has a glossy plate that uses five coats of hand rubbed lacquer to add a touch of class to what is essentially an entry-level product. However, it does attract fingerprints and depending on where you intend to position the HT/1205, the glossy top might be an issue. If you have the REL beneath a projector screen (as I did during the review), then you might want to cover the top plate to stop reflections.

The HT/1205 uses a sealed cabinet, with a front-firing driver and curved edges. There's a black fabric grille that attaches to the front baffle using studs. The sub measures 376 x 405 x 399mm (WxHxD) and weighs in at 17.2kg. The dimensions are designed to minimise the visual presence from the front while maximising the depth in order to produce deep bass.

The connections and controls are located at the rear, and REL has sensibly kept things to a minimum. There's a dual purpose, low-level stereo RCA or LFE RCA input, and a daisy chain low-level stereo RCA or LFE RCA output. The controls are fully manual and are composed of a dial for the level, another for the crossover and a switch for the phase. The HT/1205 doesn't come with any kind of remote control.

There's a 3-pin kettle style connector for the power cable and an on/off switch. There's also an auto standby feature, which turns the sub on when it receives a signal. I really like the fact that the writing which identifies each control and connection is written normally and upside down, making it so much easier to read them when peering over the back of the sub in the dark.

It's well-made, but you might want to cover the lacquered top to stop reflections

The REL HT/1205 uses a 12-inch (300mm) CarbonGlas long-throw driver that is both lightweight and extremely rigid. There's stiff carbon fibre over 60% of the driver surface, backed by lightweight glasfibre and high-quality natural butyl surrounds, along with an inverted carbon fibre dust cap and a steel chassis. REL claims the design delivers a low-frequency extension of -6dB at 22Hz.

To deliver the grunt to the 12-inch driver, REL is using a NextGen5 Class D amplifier with a claimed output of 500W. This is designed to deliver power using less space while running cooler, so there's more cabinet volume to produce deeper bass. REL has also designed a specific inverse filter for the input to permit the CarbonGlas driver to extend much deeper than previous designs.

The HT/1205 supports a wireless connection thanks to REL's HT-Air purpose-built kit, which the company is currently including for free with each purchase of the sub. It is designed to deliver zero compression and maximum dynamics with a latency in the 16-20 millisecond range. It allows you to place your sub wherever is best without having to resort to unsightly cables being strewn across the room.

The REL HT/1205 is extremely easy to set-up, thanks to a simplified back panel. Gone is the high-level connection and accompanying filters that REL is justly famous for, leaving only a low-level LFE line-level input.

In terms of connecting the sub you simply run an LFE cable using either a single cable or a stereo pair. If you're running two or more subwoofers, you can either connect them directly to your processor or receiver if it supports multiple subs, or you can daisy chain the additional subs.

Then all I needed to do was set the phase correctly, select the appropriate crossover for LFE and adjust the level accordingly. The only other setting is the on/off switch for the auto standby feature, which you can simply leave on.
This is a well-specified sub, and the inclusion of the HT-Air wireless kit is handy

REL's approach to designing the HT/1205 is clearly based around a philosophy of keeping things simple and concentrating on delivering really deep bass from a cabinet that won't dominate your room. This is a home cinema subwoofer, so it less about musicality and more about delivering exceptional levels of low-end slam for a reasonable amount of money.

The opening of Edge of Tomorrow contains a pair of titanic bass notes that the REL delivered with a worrying sense of depth, filling my home cinema with huge amounts of low frequency energy. REL's intention was to design a relatively discreet sealed cabinet that could still mine the sub-sonic depths, and in that regard the HT/1205 is an unqualified success.

The film Kung-Fu Panda includes another great bass moment when our hero employs the ‘skidoosh’ move, creating a wave of thunderous bass that rolls out across the room. It's the kind of bass moment that will put a smile on any home cinema fan's face, and the REL handled it superbly well.

The HT/1205 had proved it can go deep, but how fast and controlled is it? The gleefully chaotic action that accompanies the opening race in Ready Player One offers plenty of opportunities for a sub to add narrative impact and, while the REL handled the transients extremely well, it sometimes missed the more subtle beats.

The T-Rex that strides across the race track has an impressive roar and the arrival of King Kong is heralded by the kind of seismic impact that gives the mighty ape real size. However, the more subtle bass effects associated with the motorcycle weaving its way through the racers tended to get a little lost in the mix. On the plus side, this sealed sub delivered a responsive performance that kept pace with the fast-paced nature of the race itself.

There tends to be a trade-off between detail and depth, but if big bass is your thing the REL certainly won’t disappoint. It can go extremely low, as evidenced when watching Unstoppable with its runaway train. At one point a character describes the locomotive as having the length of the Empire State Building, and the HT/1205 does a great job of delivering enough bass to convince you that's the case.

The HT/1205 is undeniably fun and, if you crank it up, the results are often exceptional for a sealed cabinet with a 12-inch driver. Overlord is another bass-tactic soundtrack and the REL delivers a thoroughly entertaining low frequency foundation. The use of bass is particularly effective during the opening parachute drop, as exploding ordinance tears through the sky. The percussive impact is impressive, but the heavy machine gun fire that features later in the film does lose a hint of detail.

REL has sacrificed some of the musicality and subtlety that one associates with many of its other models, but the result is a subwoofer that works perfectly in multichannel home cinema setups. So if you're looking for a powerful, exciting and entertaining sub that won't cost the earth, then the REL HT/1205 is definitely worth considering.

This responsive sub is a superb performer, with deep bass and excellent control

The REL HT/1205 is an excellent home cinema model that proves it still knows how to put together a first-class subwoofer. The company has wisely chosen to keep things simple, with a basic but good-looking design that will remain discreet at the front of your room. The connections, controls, and features are all fairly basic, but you have everything you need and it makes set-up easy. At the moment REL is also including the HT-Air wireless transmitter with every purchase, which is a nice touch.

The low-frequency delivery is superb, thanks to a fast and responsive performance created by the sealed cabinet. The 12-inch driver and 500W of Class D amplification go deep, but there's still plenty of control. As a result, the bass remains tight rather than boomy, allowing this sub to create a big and bold performance that has both power and agility. On occasion, the HT/1205 can lose a bit of subtlety and detail as it mines the depths, but overall this another impressive offering from REL.

The Fyne Audio F3-12 is an obvious choice with a 12-inch driver and a similar amount of amplification but it costs £100 less than the HT/1205 – although REL's inclusion of the HT-Air wireless transmitter does even things out a bit. The F3-12 is a genuinely impressive subwoofer that represents a real statement of intent by the fledgling speaker manufacturer. The design, connections, and features are as basic as the REL, but the ported cabinet goes deep, while remaining surprisingly agile and controlled. There's excellent responsiveness and bags of detail even as it delivers the really low frequencies, making this a great first effort from Fyne.