Reign Over Me Movie Review 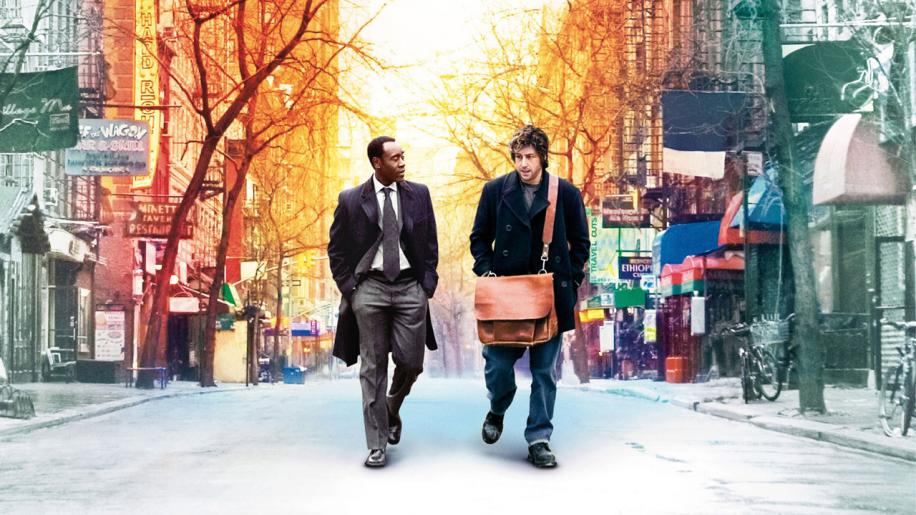 Don Cheadle, like Benicio Del Toro, is one of those actors who is so captivating that he can make any movie he is in worth watching. Although, arguably, his Hollywood career got off to a slow start, he made the most of even the smallest cameos - his roles in Out of Sight and Devil in a Blue Dress being both powerful and compelling. Even his brief stint in E.R. was tremendous, and amidst his last few movies we have seen more prominent parts for this great actor, taking the lead in the harrowing Hotel Rwanda, and an integral role in the thought-provoking Crash. Partnering up Cheadle, one of the most 'serious', dramatic actors around, with Adam Sandler seems - on paper - to be a terrible idea. Don't get me wrong, I love Adam 'Happy Gilmore' Sandler, the loveable short-tempered loud-mouth we have seen time and again over the years, but the idea of them pairing was just scary. But you have to remember that Sandler, despite being famous for his own distinctive brand of humour, is actually a surprisingly diverse actor, his roles in Punch Drunk Love and the more recent Spanglish, giving audiences a taste of what he can really deliver. After the disappointing Longest Yard and Click, taking a more serious turn and partnering up with Don Cheadle is potentially just what Sandler needed. So can the pair really pull it off in this sombre drama that deals with the after effects of the 9/11 tragedy?

Alan Johnson is a successful dentist. However his life is relatively mundane - he is bored by his wife's pastimes of photography and jigsaw puzzles, and the only spark really comes from the unwarranted interest that he gains from his female clients. Driving home one day he spots Charlie Fineman, his old college roommate. He hasn't seen Charlie in years, but read in the papers that Charlie's wife and kids were on one of the planes that crashed into the WTC. And as you might expect, Charlie is in a state because of it. He doesn't remember Alan, he is barely coherent, a rambling, unshaven, wreck of a man who rides around on his scooter all day, plays drums in a band occasionally, and spends most of his nights playing Shadows of the Colossus on his Playstation 2. Alan finds out the hard way that Charlie has blocked out pretty much everything that happened in his life before 9/11, finding the memories of how his wife and children died too hard to deal with. But the question is, does he need professional help or does he just need a friend to listen to him?

Reign Over Me is a superior drama about dealing with loss and is certainly one of the less clichéd 9/11-themed productions, taking a very serious topic and bringing it to the Big Screen without need for either sugar coating or too much doom and gloom. It rides on the cusp of being depressing, but manages to consistently provide glimmers of hope, and the few humorous moments are thoroughly rewarding, as you really feel like you care and root for these characters. The two lead roles are possibly the most true-to-life characters that I have seen penned for a Hollywood movie in quite some time, and they are people who I am sure that many of us can relate to in some way or another.

Personally, I would have never picked Adam Sandler for this role. It's not wholly unlike Dustin Hoffman's in Rain Man, and Sandler just would not have been my first choice. Based on his resume (mostly comedic roles, with only really the aforementioned Punch Drunk Love and Spanglish slightly extending his repertoire), his name would not have even come up in my mind. The part was written for Tom Cruise (it would have been somewhat ironic him taking the 'Dustin Hoffman role' in it when he played the opposite part in Rain Man) and he's the kind of person I would have expected the studios to pick. However, after having seen Sandler in this role, I could not thing of another actor who could have done a better job. He is absolutely fantastic. I've heard it quoted that he 'looks like Bob Dylan and acts like Dustin Hoffman in Rain Man' and that just about sums it up, it is a tremendous performance from Sandler, who thoroughly embraces the part and brings to life a character who is largely intolerable but utterly compelling. I would have never expected Sandler to stand his own opposite the great Don Cheadle, but he does, often outshining Cheadle with some truly touching (and not in the least bit cheesy) scenes.

And that's not to say that Cheadle doesn't still have the magic - he is great as the family man, the dentist with the good but uneventful life who, in a strange sort of way, needs Charlie in his life to bring some risk and excitement to it. Perhaps not everybody has, or knows somebody who was affected by 9/11, but most of us (at some stage or another in our lives) can relate to what Don Cheadle's Alan is going through, whether it be having to bite your lip in front of work colleagues when you really want to speak your mind or loving your partner but not necessarily wanting to spend every last second of your spare time with them. It's the two of them that make the movie, but there are several other noteworthy supporting roles and cameos that provide the icing on a very rich cake.

Amidst the other performers were get Liv 'Stealing Beauty' Tyler (who I have to say - and I'm not denying she's beautiful - is starting to look her age) as the compassionate psychiatrist, the leggy Saffron 'Deep Blue Sea' Burrows as one of Adam's troubled patients and Jada Pinkett Smith (who was abysmally wooden in the Matrix sequels) as Adam's concerned wife. Tyler is really quite decent in her reserved role, Burrows manages to be both sexy and piteous in an unusual part (you don't expect her character to develop in the way it eventually does) but Will Smith's wife is pretty unmemorable. Ok, so she's not as wooden as she was in Matrix Reloaded and Revolutions but she certainly does not bring anything to the (admittedly limited) role here. We also get a nice little cameo from Donald 'Don't Look Now' Sutherland towards the latter part of the movie, proving that he is still a force to be reckoned with.

All in all, I cannot recommend Reign Over Me enough. It's not about big conspiracies, it does not have huge explosions in it, nor has it won any awards, but you know what - it should have done. This is the kind of sleeper drama that should have surprised and wooed critics and audiences alike. I have no idea why it gained so little publicity (but I guess most 9/11 movies are faring badly at Box Office at the moment, so the gems get swept up with the rest) but I do hope that on sparkling Blu-ray (day-and-date with the DVD release) it finds a new following. This is one of the better movies that I have seen this year.