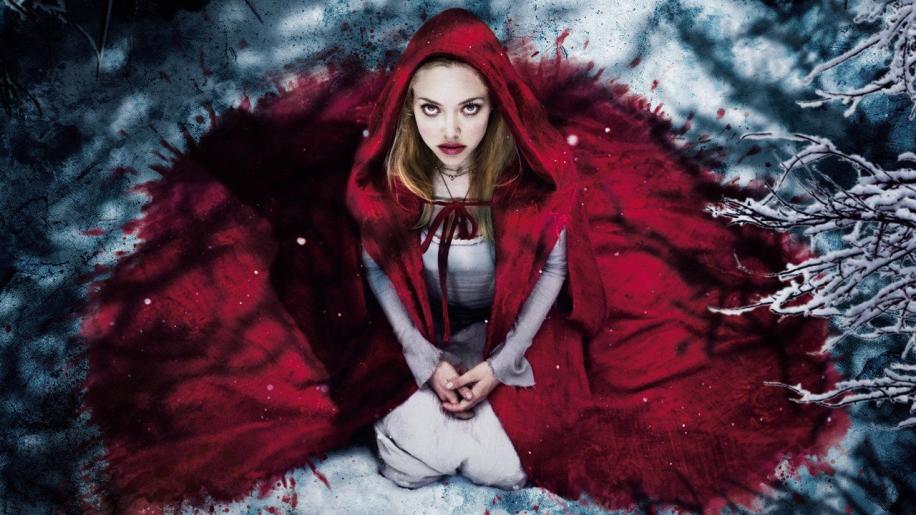 Everybody knows the story: big bad wolf confronts little red riding hood as she’s walking to her grandmother’s house; she, unfortunately, divulges her destination to the predator; he beats her to Grandma’s house, eats/locks up (depending on which child-friendly version you read) Granma and impersonates her; red riding hood arrives to be greeted by a surprisingly wolf-like grandmother, realises what has happened all too late (“my, what big teeth you have granma” – “all the better to eat you with”) but is thankfully saved by the woodcutter. Again, depending on which version you read, either the grandmother is cut out of the wolf’s stomach, found to be alive, and replaced by stones in the wolf’s stomach – whereupon his body is promptly dumped in a deep well; or a similar outcome follows much less graphic events. A fairly dark fairytale, then, and one which could, perhaps be adapted for a movie? Well, no, I’ve never really thought the material is there – the story is far too simple, and leaves little room for expansion. Perhaps a TV series of fairytale adaptations, where this is just one 30 minute entry, but not a full-length movie. Still, Hollywood is always after “new” old material, with multiple remakes, reworkings, reimaginings etc. making up the bulk of its releases, so it’s really no surprise that they went with expanding the story of Red Riding Hood. The question is, did they pull it off?

Valerie is a young lady who lives in the village of Daggerhorn. Although she is in love with her childhood sweetheart, Peter, his profession as a woodcutter makes him an inappropriate choice as suitor – and so her mother and father decide to arrange a marriage with Henry, the son of a prominent blacksmith. Things take a turn for the worse when Valerie’s sister is found murdered – the culprit? A wolf. And though the villagers gather a local hunting party to kill the beast, this only leaves Henry’s father dead in the aftermath. After being called for, the notorious witch hunter Father Solomon arrives with his own small army, preaching to the village about werewolves and curses; and about the rising of the blood moon, which will turn anybody bitten into a wolf. Valerie soon realises that the werewolf is somebody in the village – and numerous suspects pop up, as well as further bodies – but, with her grandmother, her suitors and even her own parents under suspicion, who will she be able to trust?

There’s no mistaking it: Red Riding Hood is a bad movie. Try to imagine a Twilight spin-off prequel, set hundreds of years earlier, which follows a similar story of a girl torn between two guys – one of whom may be a werewolf. Seriously, with the same director on-board for this, and even the same actor playing the lead heroine’s dad in both films, they really should have just called this Twilight: Red Riding Hood (just look at the adjacent poster art, does it seem familiar?). I’ve nothing personal against Catherine Hardwicke – she wrote and directed the excellent Thirteen, which was her debut production – and I was also prepared to accept that the end result that was Twilight, was bad mainly because she was forced to contend with the terrible books that the films were spawned from (ok, so it’s not a bad watch, because you can just laugh at the movie – read my review here); but, on the evidence of this, it’s clear that Hardwicke is now a bit of a one-trick pony. And it’s a lame trick, which you really don’t want to have to sit through again.

Grimms’ stories (even if Red Riding’ predates the Grimms interpretation) are generally quite hard to bring to life cinematically – look at The Brothers Grimm itself – because, whilst they are children’s fairytales/folk tales, they are also remarkably dark. This works ok on paper (although you have to wonder whether that would still be the case today) but becomes harder to implement on the Big Screen. Do you cater for kids and remove all the darkness completely, no doubt replacing it with humour; do you cater for adults, alienating a large audience, reducing potential ticket sales, and focussing on the more dark elements – but also risking that the name itself may put off the intended mature audience? Well, they clearly went for the middle-ground – the Twilight option – appealing to teens and tweens, and in fact aiming for the exact same audience as said saga. This PG-13 realm is the big money earner, but it does mean that you basically get a pretty insipid end result which is neither a fun fantasy, nor a particularly serious one. On the back cover it states that this is a ‘fantasy thriller that puts a haunting twist on the classic fairy tale” but I’m not sure what you’ll find haunting about this particular vision, unless they mean it’s so bad that the nightmarish memory of it will haunt you forever. I guess that’s possible.

In terms of story, Red Riding Hood really does try and throw everything into the pot and hope that something works – but it just doesn’t. Perhaps on paper some of the random ideas that made it into the movie would have worked better, but the ill-conceived flashback plot (Seriously, an entire flashback just to establish that she’s capable of killing a bunny?!), the episodic nature of the narrative, and the ultimate whodunit approach that they take, all mesh together uncomfortably. The lead heroine’s sister is killed, off-screen, within the first few minutes and we really don’t give a damn. Worse still, when characters that we have seen a couple of times start getting knocked off, there is even less emotional response.

Acting-wise, things don’t get any better. Amanda Seyfried looks like she deserves better than this, and on the evidence of Jennifer’s Body, she clearly does. She tries her best with the material, and is far superior to Twilight’s equivalent actress, Kristen Stewart, but that’s not exactly hard. And, at the end of the day, she’s still massively hampered by a botched plot, a distinct lack of character development and some truly awful dialogue. The two lead men? Well they are just utterly forgettable (Seyfried apparently even balked at the idea of working with one of them – which speaks volumes). Again, you can’t completely blame this on their abilities, but they certainly bring nothing to the production. Billy Burke – you know, the guy who looks like MacGuyver’s evil twin – tries to do something different here to what he did in Twilight, given that he’s essentially playing a very similar role: the lead heroine’s dad. Unfortunately, he was much better as a solid, good dad, rather than the unreliable, often drunk one that he unconvincingly plays here. And even Gary Oldman has a hard time keeping his head above water. To hear the consistently reliable character actor reduced to shouting lines like “lock him in the elephant!” with a totally straight face, you really do have to wonder how much money is enough.

Is there anything positive to say about this movie? Well, it certainly looks suitably fairytale-like, steeped in a fantastical aura; the sets feeling a bit unreal – as if they were ripped straight out of an old-edition storybook. Whilst this setting almost feels a bit over-the-top for this kind of material – and the sets do borderline on looking utterly fake – for the most part, it suits the proceedings. And whilst the werewolf itself looks like an extra from the Twilight Saga, that’s not such a bad thing – the mistake they make is not featuring the CG creature enough.

And the ‘Alternate Cut’ which purportedly includes a “provocative alternate ending”? Well it’s just plain silly, involves improbable acts in the blisteringly cold freezing icy snow, and a ‘shock’ twist at the end which nobody will really give a damn about. It’s ‘alternate’ because the only real difference is a change in the order of scenes, and an expansion of what were previously only flash-forward snippets. It is clear the theatrical version is superior – though that’s not saying much – and really the only noticeable difference comes in the final five minutes, which wouldn’t even be cause to justify a PG-13 rating, let alone break it. (Just to clarify, this release offers the option to play either)

Well, the unfortunate reality is that there is nothing particularly redeeming about this production. I can’t think of a decent reason for it even existing in the first place, let alone a reason for you to watch it and, were you to ignore my warnings and take the risk, I’d suggest you set your expectations extremely low.