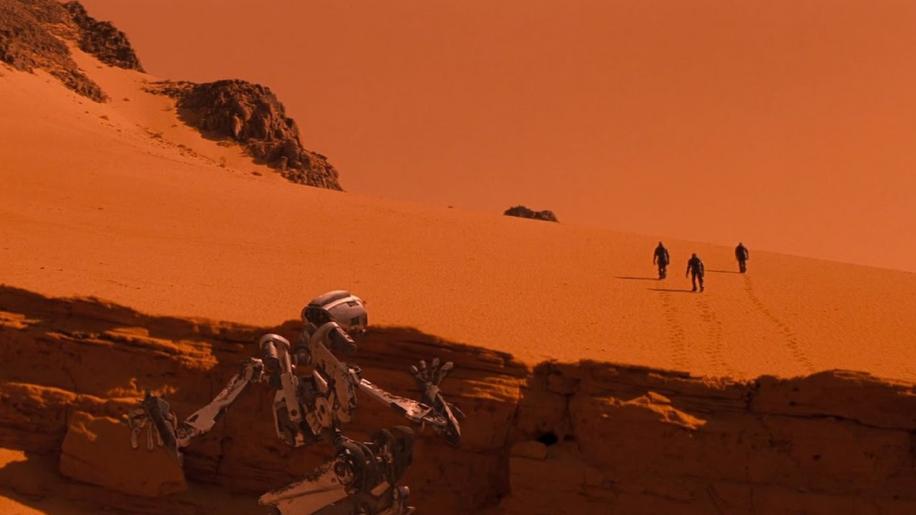 Hollywood studios love to compete with very specific movie subjects, competitively releasing two films covering very similar, often rather obscure, topics in close proximity to one another. Whether it’s the Gunfight at the OK Corral (as covered in both Tombstone and Wyatt Earp), or meteors devastating the planet in Armageddon and Deep Impact; Houdini-esque magic-trick mysteries (The Prestige and The Illusionist); or even aliens invading LA for Skyline and Battle: Los Angeles. It’s hard to ignore the similarities, almost impossible not to judge the movies against one another – and, to this day, I don’t understand how it does either Studio any favours: there’s always going to be a winner and a loser, and the success of each production is likely to be diluted and diminished by the very presence of the other. Saving Private Ryan completely obscured Terrence Malick’s return to directing after a near-20 year hiatus, the seminal The Thin Red Line, which has thankfully steadily accrued favour amidst critics and discerning moviegoers ever since, but which was certainly overshadowed at the time of release. And I honestly have no idea why now we’re getting not one, but two movies about the life of infamous porn star Linda Lovelace (Deep Throat) – surely one is enough?

At the turn of the millennium we had duelling Mars movies – going head to head with then-top-billing stars, on a quest to introduce audiences to the planet, and warm them to the notion of exploring it further. The missions didn’t go too well and, with neither film truly capturing the sci-fi potential of the mysterious red world, viewers were largely left out in the cold. Up until this point, I had not seen either of the movies (the other one being Brian De Palma’s Mission to Mars), but with Red Planet up for Blu-ray release, I figured that there was no better time to take a trip into space. After all, how bad could it really be?

“By the year 2000 we had begun to over populate, pollute, and poison our planet faster than we could clean it up. We ignored the problem for as long as we could. But we were kidding ourselves. By 2025, we knew we were in trouble and began to desperately search for a new home – Mars. For the last 20 years we've been sending unmanned probes with algae, bio-engineered to grow there and produce oxygen. We're going to build ourselves an atmosphere we can breathe. And for 20 years it seemed to work. It looked like we pulled it off. We'd done it. Then all of a sudden, oxygen levels started to drop. We don't know why.”

Red Planet follows a team of scientists and engineers who have been sent to Mars to find out what went wrong with all the terraforming work that had been done over there. But after a solar flare disrupts their orbit of the planet, the crew are forced to bail at the last minute, and the commander is left behind to keep the ship running until it’s time to bring them back. Of course, the ground team find much more than they expected, dealing with a horrendous landing impact, a sharply depleting oxygen supply, lack of contact with the mother ship, an AI-driven robot going haywire, murderous intentions amidst their own, and, ultimately, having to confront the reason behind the mysterious planetary changes which seemingly abated the terraforming work. And, even if they survive all of this, how the hell are they supposed to get off the planet?

I think that there was a fair amount of potential here to tell an interesting story, with well-developed characters, and produce it efficiently and effectively as a proper quality sci-fi action-thriller. There are some interesting philosophical ideas hinted at here: ruminations about the loneliness of life in space and about the difficulty of being so far away from home; as well as some intriguing nods towards the Martian environment, the red desert-like landscape, and, ultimately, the potential for life on Mars. The trouble is these ideas are almost all universally squandered by an inept first (and only) time director who clearly did not know how to tell the story that he wanted to tell. It looks like he was torn between crafting a survival movie on a barren planet, an AI-gone-wrong movie, a psychological thriller about the effects of space isolation, a philosophical exploration of faith and religion not confined to the Earth, a mystery about life on another planet and Darwinian evolution beyond the known realm, or even a portentous fable about the future of mankind if we keep raping the very planet that we rely on to survive; because, at one stage or another during the runtime, there are elements of all of these put forward – hints of greater, better movies in the making.

There isn’t a single idea that is followed through to a logical conclusion, with the most promising concepts often squandered in favour of AI-driven (poor) CG fight sequences – one of which has a wild cat-like robot, damaged on impact, take on one of the crew members with whirling-blades-for-hands and slice the pole that he is wielding to pieces bit by bit. It’s like you’re watching a Warner Bros. cartoon where Daffy’s trying to fight a robot alien with a broom. In fact, if they had ripped all of the scenes involving the robot out of the movie, I suspect it could have been considerably better; allowing more time for character development, and allowing the story arc of the murderous crew member to be fully realised as the remaining team head towards a rescue pod which will cannot fit all of them. At least two of the crew members die off-screen, as a part of some very poorly conceived plot strands, and about the only semi-decent, reasonably tense moments in the entire movie come from sequences which don’t even take place on the planet – including a first-act zero gravity fire in the orbiting space station.

The cast all appear to be miscast as well, perhaps intentionally so, to throw viewers off and allow for more unpredictability – but this would have only worked in a better film. And it only works if the actor is good enough to convince you in that part, however unusual it may be. I’m not going to rail against all of these actors – I like most of them – but they never had much hope of pulling this off. Seriously, what’s Terrence Stamp even doing in this movie? Can you see him going on any space missions in his mid-sixties? He’s a quality character actor who, just a year earlier, was single-handedly driving the excellent low-key revenge vehicle, The Limey, but here he is utterly out of place, and utterly wasted. Hell, you might as well cast him in Star Wars: The Phantom Menace for about thirty seconds before being ousted. Oh yeah, they did that too. Stamp’s role here is purely to contribute to the more philosophical aspects of the story, and you can tell by his steadily decreasing presence just how much the Director cared about that particular plot arc.

Then there’s Tom Sizemore as an expert geneticist. Sizemore, despite his unruly off-screen reputation, can play some interesting roles – he was great in Saving Private Ryan, Heat, and True Romance. Even his early appearance in Oliver Stone’s Born on the Fourth of July showed his talent. But he just doesn’t work as an expert geneticist, seldom saying anything in the least bit intellectual as a character (he can’t even correctly list the four letters of the genetic code!!) and mostly just cracking wise in the way that Sizemore does best. Only less aggressively, and with much less swearing.

The two lead characters are played by Carrie-Anne Moss and Val Kilmer, with Moss the only one who really manages to survive this piece intact, mainly because her scenes were all off-planet (and, as noted, some of the better scenes in the film) and because she also seems reasonably convincing as the leader of this group – no doubt largely thanks to her success in the role of Trinity in The Matrix Trilogy. Kilmer, on the other hand, was really at the peak of his career during this period – lead roles in everything from Batman Forever to The Saint (even if they weren’t any good) – and, whilst he’s quite charming, occasionally witty and reasonably different as the on-the-ground lead character, he’s significantly impaired by the script and story, and most of his talent is drowned out by the ludicrous plotting. It’s a shame because, if he had been given the lead role in three better productions, perhaps his career would have gone in a completely different direction (have you seen Kiss Kiss, Bang Bang?), and he wouldn’t now be known for starring in dire straight-to-DVD flicks opposite Fifi’ Cent.

Red Planet isn’t a terrible, awful, how-on-earth-did-this-get-made kind of movie. The effects, whilst occasionally dodgy (particularly with the insects), are more than enough to allow you to suspend disbelief for the duration, the action keeps you reasonably engaged when the plot disappears (as it does frequently) and the lead actors at least are pretty watchable. But it is still a fairly inconsequential, routine escapade; largely culling together ideas which are almost universally realised better in movies that are, themselves, far superior, to create a mish-mash result which, despite the scattergun approach, fails to hit any of the required targets. And it also promises far more than it delivers, starting off on a relatively thoughtful footing with a smattering of potential, before devolving into just another generic sci-fi action-thriller. By now you’ve probably caught it on TV on a Saturday afternoon and, if you haven’t, then you might as well just wait until it comes back round.