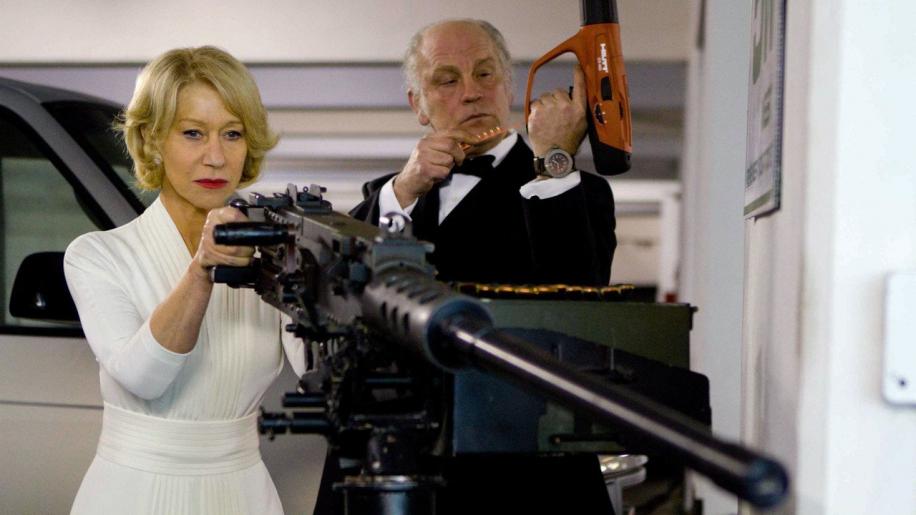 Not so long ago we had Sylvester Stallone putting together a team of big action movie stars in ‘The Expendables’ and claiming it was the best thing since sliced Semtex. Now we have the American Region A locked Blu-ray release of ‘RED’ starring Bruce Willis, John Malkovich, Morgan Freeman, Richard Dreyfuss, Ernest Borgnine – all big names in their own right who could easily have filled cinemas on their todd, far less as a team in the very same movie. Surely the very thought of this bunch together in a film would be the reason you’d want to see it. You must be joking! The very same film has an even greater draw – the adorable Helen Mirren and what’s more, she fires machine guns! It just doesn’t get any better! This lady who really knows how to act and pick up statuettes, having played a gangster’s moll in the gritty ‘The Long Good Friday’ many moons ago or, lately, our very own Monarch in ‘The Queen’ – would surely be something to behold in an all action piece with a team of male co-stars. Surely it just couldn’t fail to be a crowd pleaser.

Every so often we are presented with a movie that should be a sure fire hit and is awaited with great anticipation, only to fail to set the world alight upon release. ‘RED’ sadly falls into this category. It could have been so good, but it just felt like someone was resting on their laurels. Not that it’s a bad movie, it just could have been so much better.

Bruce Willis plays ‘retired extremely dangerous’ (the RED of the title) former CIA agent Frank Moses who’s living a dull life alone in a suburb and he really lives for the times when he can call Pension Clerk Sarah Ross (Mary-Louise Parker) on the pretence of having failed to receive his pension cheque. Things really pick up, however, one night when his home is infiltrated by a gang of assassins who clearly mean him no good whatsoever, so Brucie Boy (literally) digs up his guns and lets ‘em have it, proving that he’s ‘retired extremely dangerous’. As he reckons those who want him dead will have been monitoring his calls, he kidnaps the bemused Sarah for her own safety ( I was reminded of the Tom Cruise actioner ‘Knight & Day’ here) and sets out to enlist the help of other, slightly ripe, former agents in his bid to find out what’s going on. John Malkovich plays the paranoid, eccentric Marvin who is convinced that the world is out to get him – only this time he’s right. Nobody plays paranoia quite like Malkovich as he just has that slightly weird look that convinces, so when he pulls a gun on a woman he claims has been following the team we think he’s over reacting. The same crazy man identifies a helicopter that he claims he’s seen before and immediately checks the note of its registration number on the piece of paper he’s carrying. Now, I’ve worked with people like this (you know who you are) and Malkovich has them off to a tee.

The solid Morgan Freeman is gathered into the fold as Joe, another retired CIA man, who needs little persuasion to join the gang. Then, the moment I’d been waiting for – around about an hour, in fact – arrived. That Dame to beat all dames, Helen Mirren lit up the screen as ex-CIA babe Victoria. Well, she seemed a bit demure at this point but it didn’t take long for her to get in the swing of things. So now the “band’s back together again” and they’re on the trail of a slightly eccentric bad guy, played in a somewhat over the top manner by Richard Dreyfuss. But who’s to say that overacting is a bad thing. Think of Alan Rickman in ‘Robin Hood – Prince of Thieves’ or Lee Marvin in ‘Cat Ballou’, but hey c’mon ‘RED’ isn’t really that kind of movie. The director, Robert Schwentke (‘The Time Traveller’s Wife’), really should have advised Dreyfuss to stop trying to steal the movie from others who can do it with just a single look. You know who I mean, Mr Malkovich.

While it coasts along on a wave of friendly jocularity, with Brucie Boy’s smirk underlining the fact that we shouldn’t take it too seriously, the movie still asks us to believe that this malarkey is for real as it’s all set in the modern day with technology all around. The pressure, if there is any, is supplied by Karl Urban as the young CIA operative hot on the trail of our intrepid gang of wrinkly heroes as they, in turn, pursue the truth. I won’t reveal the mystery element of the story, but let’s just say that it goes all the way to the top, well nearly.

‘RED’ contains about as much gunfire as an army garrison on active duty could generate in a whole month, with bullets pinging and ricocheting around the sound field. I have to admit that the lovely Helen did look good behind the blazing muzzle of a machine gun or toting a sniper’s rifle. Almost as good, in fact, as she looked in the elegant white evening gown or fur jacket towards the end of the movie.

All of the stars turn in perfectly good performances – and you’d expect no less from such an experienced bunch, but you did get the feeling that they too were having some trouble taking it all seriously. Brian Cox pops up as a former Russian agent and adds his strength of character to the movie, but he too just seems to glide through it.

While the action scenes are very accomplished and well staged, I never at any point felt that our heroes (and heroine) were in any kind of real danger. It all seemed too comfortable and had a certain dream like quality. Someone back in Hollywood’s heyday said that watching a movie should be “like dreaming with your eyes open” and, that being the case, then ‘RED’ scores top marks.

Having said that, it’s an entertaining enough movie with plenty going on to hold your interest. Rather than involve you, it pretty much washes over you and could easily be labelled ‘chewing gum for the brain’ as the action plays out before you in an undemanding manner. All in all, it’s an agreeable enough way to pass a couple of hours at the end of a hard day with a glass of wine. Then, of course, there’s the lovely Helen...

Did I mention that Helen Mirren was in the movie?