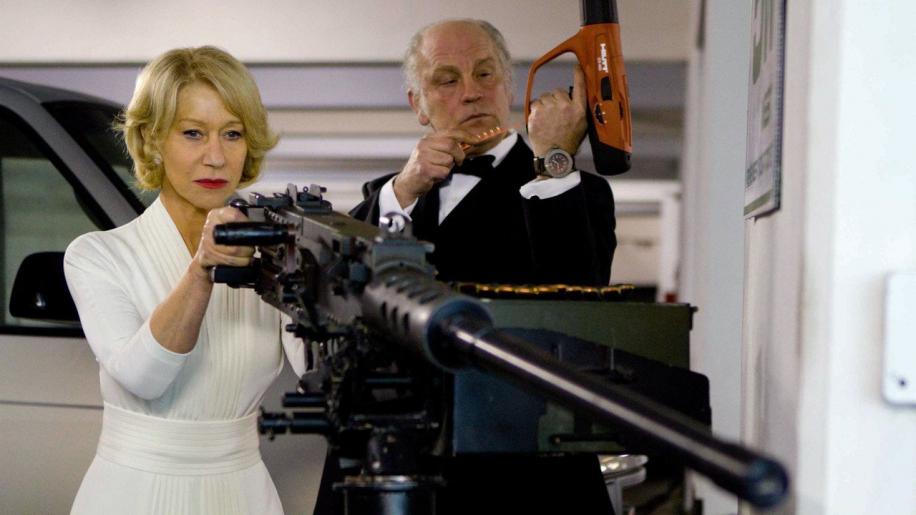 It’s tough when actors commonly known for playing action heroes grow old. And I don’t just mean for them – also for their fans, who would probably prefer if they kept going even beyond their capabilities (think Roger Moore in A View to a Kill). A recent resurgence in action work has seen the now sixty-something Stallone prove he’s still got what it takes, with recent sequels to his classic franchises Rocky and Rambo, under his belt, as well as the 80s throwback action vehicle The Expendables (which, I hope, will be developed into a more substantial franchise after its marginally disappointing start). Bruce Willis has definitely had his ups and downs on the action front – his career peppered with Die Hard sequels which stand out as mile-marker attempts at remaining ‘in the game’. Whilst many were not that impressed with his latest Die Hard film, Live Free or Die Hard, honestly I was just happy to see John McClane back in action – and I really do hope that he pulls off another one before... well, before it’s too late. There are those that would argue that it’s already too late, but then there are those with greater imagination than that, who actually enjoy the idea of older, weathered veterans still trouncing on the young upstarts that seek to replace them. And so we come to Red.

Frank Moses is a former black-ops CIA Agent. He lives a quite, reclusive life in the suburbs, his house having minimalist interior decoration, and his only contact being the girl on the other end of the phone at the pension bureau. Enjoying his little ‘chats’ with her, he frequently tears up his pension cheques just to give him an excuse to call her up. But when a hit-squad breach his house with a view to eliminating him, Frank has to return to his training – killing, escaping and evading as he forges a path to the people who have come to take his life. First, he grabs the girl on the other end of the phone – whose life he believes will now be in jeopardy because of the contact he has had with her – then he starts revisiting all of his old contacts, fellows ‘R.E.D.s’ (Retired, Extremely Dangerous) Joe, who’s in a retirement home, Marvin, who lives in an underground bunker, and Victoria, who is still keeping up appearances. With the CIA dispatching their best agents to hunt them down, the disparate group have to use all their wits and experience to stay alive, and get to the truth.

Based somewhat loosely on the short and relatively serious Warren Ellis comic series by the same name, the movie adaptation of Red is comparatively silly. Within seconds the quaint music and witty banter reveal the comedic intentions that the filmmakers were going clearly for, so much so that if you take another look at the front cover you might wonder whether or not you’ve stuck the wrong disc in the machine. And then the action kicks in, and you pause for thought. Maybe there’s something here after all beyond all of the comedic frivolity. More comedy, and more action ensue – one painfully obvious effects shot jars in your memory (yes, that one from the trailer where Willis steps out of the car) – but generally it’s all good stuff. Before long, you wonder where the hell the story is, and, towards the end, you realise that there really isn’t one. Red is a very simple affair – it is literally an action comedy, i.e. you get some comedic scenes interspersed with action scenes (or the other way around, depending how you look at it). And that’s it. Roll credits.

Personally, for what it is, I found it remarkably enjoyable. Yes, I’m the same guy who liked The Losers (still one of the only two in the country, I believe) and, yes, the parallels between the two are painfully obvious: both are tales of a team of veterans who are targeted for assassination by their own Government, and forced to go on the run and fight back to, eventually, get to the truth behind it all; both infuse highly stylised comic book-originated action with witty banter and repartee between the leads; and both rely more on the visceral elements within them to entertain and smudge over the cracks in the thin plotting. Because let’s face it, these are really thin plots. But whilst I preferred The Losers, for my money, Red is still a cut above the lacklustre, effects-driven The A-Team and, considerably more professional (and much more successfully funny) than the other not-quite-past-it ensemble actioner, The Expendables.

Bruce Willis is undeniably getting older – even his shaven head is clearly that of a now grey-haired man, and his lines are setting in – but I think he’s still got what it takes to pull off an action role, and Red certainly gives weight to that statement. It may just be a stepping-stone to his next Die Hard sequel, to reaffirm his ability to do another one, but he never looks less than convincing in the role. If anything, you wonder whether the CIA might have just retired him a little too early. Willis has always managed to infuse action-orientated roles with decent humour, witty, sarcastic remarks coming easily to him as he dispatches the bad guys with multiple shots to the head and body. Here he gets to show even more of the comedic side to his acting talents, capitalising on what we have seen before in the likes of The Whole Nine Yards (and its lacklustre sequel) as well as, more recently, Cop Out, but serving it up to the audience here in a slightly more accessible action-package. I think this is where Willis humour works best (Nine Yards was something of an exception, in the same vein as Meet the Parents) because, at the end of the day, his fans do still like him to be shooting people and breaking heads, even if he has a witty line to interject occasionally.

Accompanying him we have the stalwart presence of Morgan Freeman, also playing a character arguably older than he comes across (why’d they have to make him 80?!), and somewhat underutilised. Some might wonder whether his part here has been reduced/changed from what was originally intended, because he certainly doesn’t get any satisfactory ‘closure’. There’s also John Malkovich, who is absolutely perfect as the insane conspiracy-theorist member of the group. Now this is how they should have portrayed ‘howling mad’ Murdock in The A-Team – totally bonkers. Malkovich brings out the big guns for arguably his most eccentric, wacky role ever (and he’s done his fair share), and you certainly relish every scene that he (sometimes literally) pops up in. He is easily the best thing about the movie. And, finally, Helen Mirren completes the team, and there’s something strangely alluring about seeing the Oscar-winning classic actress, who would seem more suited to a Royal role, firing off a mounted ’50-Cal. Seriously, she might seem like an odd choice for the group, but she really works in the role.

Rounding out the cast we have a decent opponent in Karl “Bourne Supremacy” Urban’s methodical CIA assassin, a suitably scheming Rebecca Pigeon as his boss, and a nice role for the ever-watchable Brian Cox (Manhunter), who isn’t new to playing Russians, but appears to have added an unintentional campness to his accent this time around; and even Ernest Borgnine (Airwolf) pops up, providing an enjoyably warm cameo as the CIA records-keeper. And we can’t forget the lead character’s love interest, the telephone clerk played by Weeds’ Mary Louise Parker. Damn if I haven’t always had a soft spot for her – those wild wide-eyes, naughty smile and disarming laugh, she’s definitely proven (perhaps as Mirren did for so long, well beyond her time) that age doesn’t necessarily diminish attractiveness, nor sexuality. Here, however, she appears to be channelling Phoebe from Friends, and her role is actually slightly confusing: initially a prisoner, then magically a reluctant, slightly wacky sidekick – and I’ve no idea where the loving bond developed between these two: there’s certainly nothing to warrant the third act choices made. Don’t get me wrong, it’s nice seeing her involved, but her character is at times as much of a problem as an enhancement to the ‘story’.

So, coming back to the story, they really shouldn’t have gone for this weird-ass convoluted twist-laden affair because it just doesn’t hold together – and, as I’ve stated, you’re left wondering ‘what story?’. Willis’ Frank Moses is targeted for assassination because of something in his past. Ok, done before, but we can go with it again. Solid so far. He’s part of a list of people targeted for assassination, mostly OAPs. Ok, novel touch, so I’m still listening. The act committed in the past wasn’t actually one by him, but by someone else. Well, I’ll go with that, and if they’d just ended it there it would have been fine, but they go down the route of – it wasn’t just someone else, but there was someone else behind that someone else, and they may not be who they seem either. Or something. A random (and never explained) sniper shot later and you’re suddenly scratching your head going ‘what’s going on?’. Seriously, the writers – also those responsible for that terrible movie adaptation of the solid graphic novel thriller Whiteout – totally ruined the simplicity of the original story here, piling on the twists and complications to a story that really need not have been so damn convoluted.

Red’s biggest flaw is the story that tries to interfere with its action-comedy strengths. If they had just kept things simple, stuck to the basic premise, and allowed the characters to come to life with bullets and banter it would have been sufficient. On the plus side, if you remember where the movie’s strengths lie, you will find it undeniably entertaining – the action and comedy elements simply never let up for the entirety of its reasonably streamlined runtime. No, don’t watch this movie expecting to understand everything, to get to the bottom of some involving conspiracy – forget that it even has a story beyond a bunch of highly trained assassin pensioners running around with guns fighting off black-clad hit squads. Watch this movie for Willis, crazy John Malkovich and the rest of the eclectic cast of ageing stars who spend about 100 minutes proving that they are not past it, and do so with a considerable amount of style. R.E.D. Reliable, Entertaining, but Dumb. And don’t hold that against it – just bare it in mind when you sit back and enjoy this action-packed, comedy-infused ride.

For those have you who have already seen the film, you may, like me, have noticed that one of the key characters ‘disappears’ rather abruptly midway through. Now, was I the only one who, throughout the rest of the film, was waiting for him to reappear? Well, even the extended ending (in the Deleted Scenes) does not expand upon this rather random character conclusion and one can only hope that, since the movie did so well that a sequel has been green-lit, this much loved and somewhat underused character may well still return...