"I give up. This whole thing's very Russian." 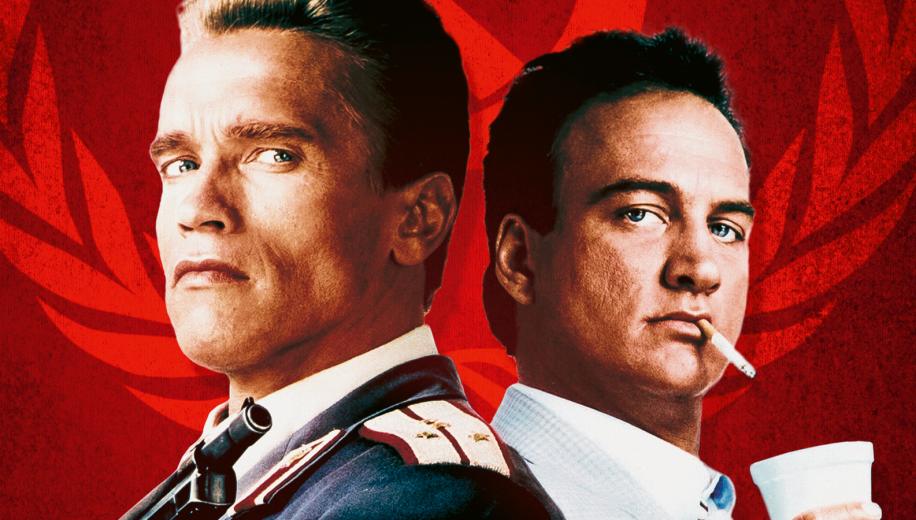 Walter Hill's 1988 buddy-buddy actioner, Red Heat, might - on a sliding scale - sit somewhere below both the genre-defining Lethal Weapon and even Hill's earlier 48 Hours, but it's still prime 80s Arnie action.

By 1988, Arnie was on fire. Conan in '82, Terminator in '84, Commando in '85, Raw Deal in '86, The Running Man AND Predator in '87, then Twins AND Red Heat in '87. It was a fierce quest to dominate the Box Office in terms of his trademark action vehicles, and he would prove unstoppable for a whole 10 years, all the way through a career-high sci-fi actioner in Total Recall (possibly bested only by Predator) to a career-defining Terminator 2.

Perhaps somewhat surprisingly, for years Walter Hill - the minimalistic modern Western writer/director behind the likes of Drive's inspiration, The Driver, the underrated Wild Bunch riff, Extreme Prejudice, the aforementioned Eddie Murphy / Nick Nolte classic 48 Hours and even HBO's unmissable Deadwood - had wanted to work with Arnold Schwarzenegger, seeing in the Austrian Oak a classical Greek warrior look and just needing the right vehicle to suit the man's larger-than-life presence and distinctive accent. Hill would come up with an idea for a Russian-flavoured fish-out-of-water meets buddy-buddy action comedy which just about fit the bill, and Arnie jumped at the chance, perfectly cast as the Soviet missile of a man who comes crashing down in Chicago only to get lumped with James Belushi's hot-tempered, wise-cracking local cop as they tear through the city looking for vicious Russian drug lord.


Arnie was perfectly cast as the Soviet missile of a man who comes crashing down in Chicago only to get lumped with James Belushi's hot-tempered, wise-cracking local cop

Although it was ultimately decimated at the Box Office by Arnie's inspired pairing with Danny DeVito later in the year, there was some magic in his collaboration here, with Belushi the perfect loud and aggressive joker foil to his stiff Terminator-esque Russian interloper. Hill's script worked well to allow the film to play out as a straight action thriller but, all the while, gave Belushi witty lines which knowingly took down not only his Russian counterpart, but also the actor behind him, riding a fine line without lapsing into parody.

The action was pretty engaging, with Hill enjoying setting up a few mildly memorable setpieces which follow a format that was kind-of interchangeable across his similar era run from 48 Hours through Extreme Prejudice and this to Another 48 Hours. Ironically (although not so surprising given his form), James Horner's score - already, also ironically, stolen from a Russian composer - would be similarly interchangeable across both 48 Hours' films, and would later appear as a recurring theme across both Harrison Ford / Jack Ryan outings, Patriot Games and Clear and Present Danger, but was no less apt for the ominous "dangerous city streets" vibe in Red Heat. Perhaps it's not top tier Arnie, nor even the best of the buddy-buddy genre, but it's a thoroughly entertaining ride nonetheless.


Red Heat makes its UK 4K Ultra HD Blu-ray debut courtesy of Studiocanal hot on the heels of the Lionsgate/Studiocanal US release. It's another impressive full-fat native 4K restoration from Studiocanal, working their magic with a remaster from the original 35mm film source, and even throwing Dolby Vision into the mix.


It's another impressive full-fat native 4K restoration from Studiocanal

Studiocanal continues their impressive run of restoring older shot-on-film productions to current 4K glory, following commendable work on The Deer Hunter 4K, Apocalypse Now 4K, Don't Look Now 4K and even the Rambo Trilogy 4K and Lock Up 4K (with Universal Soldier 4K Angel Heart 4K, and Leon 4K on the way). The results have proven almost invariably great, all the more impressive for also almost universally wielding Dolby Vision too. It's certainly the best these films have ever looked, and Red Heat's 4K presentation - as unlikely a candidate it might be (although no more unlikely than Stallone's Lock Up) - doesn't buck that trend.

Detail is excellent, with the 4K remaster pulling new levels of rich texture from the source film, bringing fine skin flourishes - lines, pores and pock marks, and beads of sweat on a young Gina Gershon - right to the fore like never before. Sure, the cleaning process still hits that very fine line between DNR and excessive DNR, but the evident detailing and finest of fine layers of grain running throughout remind you that this is very good work, and this is another 80s action 'classic' given a new lease of life on the format. Yes, it's not perfect, with some minor motion issues during the credits sequence, and fractionally variable occasional softness, but hell it still wows, even if mostly for fans who have seen what the film looked like across the years from VHS to DVD to Blu-ray.

WCG and that aforementioned Dolby Vision HDR, whilst far from striking on some of these releases, still have some nice little moments to shine, here yielding a fabulous blazing furnace in the prologue, shop signs and prison cells that - rather pleasantly - glow with a cool blue hue that almost pops Blade Runner-style, and really stands out when taking in the city streets at night; skin tones are rich, and clothing colour choices (particularly the red stripes on the uniform) allow for some further vibrancy too. Black levels are deep and inky, affording a strong backdrop to cast the neon-peppered palette against, and rounding out another fine piece of DV-enhanced 4K remastering work from Studiocanal.

The accompanying DTS-HD Master Audio 5.1 track also does a solid job, affording strong prioritisation of the core elements of dialogue, score and effects.


The best the film has ever sounded

Dialogue comes across clearly and coherently throughout, whilst effects have that distinctly 80s rattle, with handguns initially quite dated in style, although a few of the larger calibre weapons carry a little more heft, and a more satisfying boom to them. The score easily gets the best of the lot, as recycled as it might be (and would be in the future), it suits the tone of the movie and gives it a nice mood, certainly fitting in with the other Hill movies that used the same themes, and bookended with more classical Russian pomp that gives the surrounds plenty to play with. It's hardly Atmos magnificence but it's still likely the best the film has ever sounded.

Studiocanal also does another commendable job on the extras front (and actually porting them over to the 4K Ultra HD disc itself) delivering a slew of Featurettes and Interviews that offer background into the production.


Studiocanal also does another commendable job on the extras front

There are focal pieces on Schwarzenegger, the politics of Red Heat and the stunts, as well as an interview with the actor who plays the villain, an archival Making-of Featurette, a Trailer and some TV spots.


Red Heat is another impressive native 4K restoration from Studiocanal, following The Deer Hunter 4K, Apocalypse Now 4K, Don't Look Now 4K and the Rambo Trilogy 4K and Lock Up 4K. These are largely definitive must-have editions for fans of the films.


Perhaps it's not top tier Arnie, nor even the best of the buddy-buddy genre, but it's a thoroughly entertaining ride nonetheless

Red Heat's UK 4K Ultra HD Blu-ray disc affords us not only native 4K video, but also added Dolby Vision enhancement, and with great audio and a decent selection of extras, it remains a great release that fans of the film might never have expected to come to fruition.