Saddle in for an epic adventure 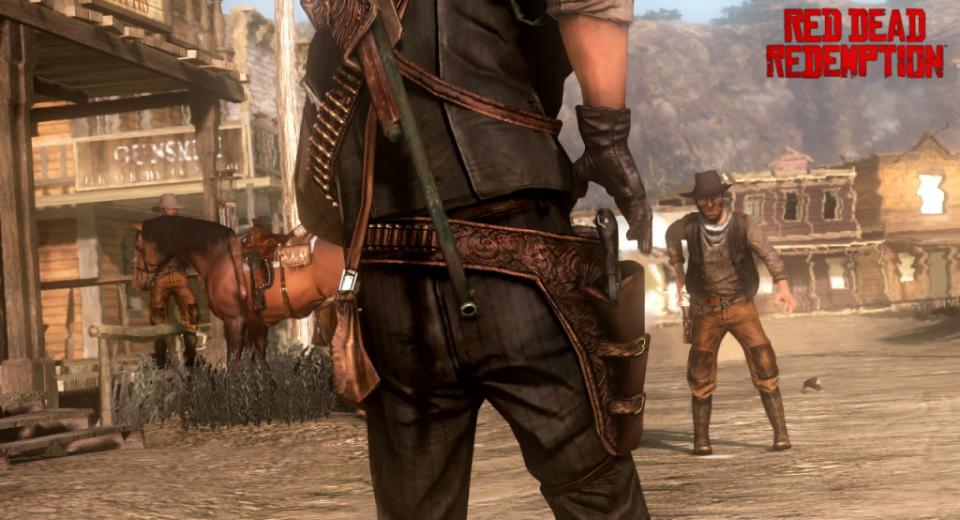 When Rockstar releases a statement that they're making a new game you can't help but let out a little wee in excitement, especially when it's an open world adventure. Obviously, the Grand Theft Auto comparisons will be inevitable, but surely with their experience, there are no safer hands than Rockstar's when it comes to these types of games. A sandbox game, for those not in the know, is where the player usually assumes the role of a protagonist thrown into an entire 'game world' in which to roam and fulfil a story at their discretion. This world is usually an entire city, or in Rockstar's style, a string of three islands, whereby you start on the first and unlock the next two as the story progresses.

We all have, and there's no denying it, a little cowboy living in us somewhere. This passion is usually calmed by watching Back to the Future 3 or a classic Clint Eastwood film. However, the success for such games over the years has been a hit and miss affair. Only Call of Juarez: Bound in Blood has lately stepped up to the plate in recent years and, where most did, it didn't totally suck. So with a tricky setting to juggle with, Rockstar has no easy challenge on its hands.

As I said before, any sort of announcement from Rockstar is met with huge media attention and hype, which hasn't been misplaced thus far. Many have kept their eyes on Red Dead Redemption's progress for some time now and have been waiting in anticipation like a kid at Christmas. If their hopes are misplaced, then the lynch mob just may have something to say about it.

Reflective of a new unstable era, you take on the role of John Marston, an ex criminal gang member who now finds himself trying to make amends.

One thing must be immediately addressed before we go any further; this is by no stretch of the imagination just Grand Theft Auto pasted over with a Wild West backdrop. This is a game in its own right and should be taken for what it is. After a short train trip into the world, you can see how far Rockstar have gone just to make this game both accurate, and look absolutely beautiful.
Historical accuracy isn't something you would normally associate with Rockstar, but stick with me here. The setting, early 20th century, sees the end of an era whilst a new and unstable one shall take its place. The local Indians are being pushed around by the new farming settlers, the motor car has made its first appearance and further afield people are now living in bricked housing. Not being too over powering, this sets the perfect scene for the journey you are about to embark upon.

The beautiful backdrop makes this no chore as a well implemented day/night cycle gives the player lovely sunsets and sunrises, whilst the moon glimmers at night and a myriad of creatures come out of hiding. Every area of the game has been created wonderfully, with no place being either too sparse or too densely populated. Again, accurately replicating towns from the time and giving you plenty to do.

The audio effects are also crystal clear; guns have unique sounds, animals all react when shot or leashed, and you can hear every item on the protagonist John's back rattle as he canters along on his trusty steed. It must also be said, your appreciation for horses backsides will increase tenfold here as all their muscles tense when they begin to canter.

Cinematics have improved graphics as you would expect and really do promote the quality of the game, giving you a clear view of that rough 'I could strike a match on' beard on Marston's face. The rest of the world is vastly detailed for that matter and there are no ugly details or textures to be seen. Items of clothing clearly have differing textures, skin looks like it should whilst the various animal hides are incredible to behold.

A lot of low budget games fall foul of giving many characters the same motions, making the game often feel like it's on one continuous loop, here though every citizen moves in their own individual way. The only problem being apparent is when running, John Marston does look like he will sprout into a Peter Crouch inspired robot dance at any moment.

As per open world adventure, Marston tries to confront ex gang member Bill Williamson but soon finds himself trailing all over the county and thus the game world doing errands here, and chasing after wanted criminals there. All this being in aid of trying to find his wife and child who the government are holding until he finds and captures or kills his old friend turned adversary.

It would almost be guaranteed that most of the mechanics would be improved editions of those existent in Grand Theft Auto. The button system is more or less the same, triangle to mount/dismount, L2 to aim and R2 to fire and so on. The cover mechanic also returns, pressing R1 to snap to cover, but this is no bad thing seeing as though it worked then and it still works now.
Aiming and shooting is again both simple and satisfying with every gun handling how it should - all reacting differently when fired. They all feel balanced in the damage they deal, with enemies taking more than one shot from any gun on occasions, reflecting an intelligent damage system and clever AI as they continue firing when injured.

Horses: The original form of transport. Perhaps now an unwelcome sight to many drivers on a road that once belonged to the equines. Well, leave your prejudices at the swinging bar doors, you're about to fall in love with them. You'll acquire an unquestionable appreciation for your animal, whilst in return it will give you unquestioned loyalty. For the most part, they handle how you'd like them to, though sometimes they can be a fair pain in the backside, often unwilling to turn or move anywhere fast, you can lag behind the character which you are intended to be following.

There's a clever honour system implemented within the game that tracks more or less all your actions and adventures you embark on. It's not too dissimilar from the karma system in Fallout 3, but here it feels more balanced with one action not making you either too rogue or honourable. For example, completing a main mission that entails rescuing a missing citizen will reward you with 100 positive honour points whereas killing too many brawlers in a fight will reduce your honour by 50. To these actions, the people in each town will react positively or negatively depending on your honour, so don't be surprised if everyone runs from you after you've hijacked three stagecoaches in the past few days.

As expected, Red Dead will take an average gamer a fair few hours to trawl through, presuming they do the occasional side quest here and there. These extra missions are, of course, dotted all over and offer a wide variety of scenarios for you to solve such as buying land for someone or killing some harassing bandits.

Strangers can also be found all over the county, another nice feature from Grand Theft Auto IV, who are indicated by a purple question mark on the map. Not holding your hand too much, a purple circle will appear on your map, which gives you a general area of your objective which allows some exploration.

Dynamic events, on the other hand, are something completely new and won't be found in GTA. So when riding around on your horse through what would seem a boring landscape, a civilian will appear round the corner who is being harassed by highway bandits. You will be encountered with a choice; help them or stand by and watch the bandits do their thing. The latter obviously, well depending on your personal outlook, will reduce your honour level somewhat.

Adding to the game's spontaneity, wanted posters will appear regularly highlighting individuals for you to go kill or round up with your lasso. The term, “Wanted dead or alive” applies here and the player will receive more honour points and dollars for the criminal being brought back hog tied to the back of your horse, as opposed to bringing back evidence of their death.
Given that you will be faced with this wealth of mission available, it's hard to see how you won't be spending a long time in the Wild West.

All this without even mentioning the multiplayer. When you first go online, you're dropped into a free roam environment. Just like your single player escapades, you can do pretty much what you want and go catch criminals or partake in missions solo or along with friends or new people you'll meet on your free roam server. You can set up a 'mob' and be good and help the country, or go rogue and hijack any unfortunate by passer. There are also several game modes to play such as gang showdowns which translate to team death-matches after a shootout, or a 'gold rush' where everyone competes individually to capture as much gold as possible. Neither of these modes seem to be weak and should keep people's interests high, with downloadable content bound to boost this appeal further in the near future.

This game will put the joy back into gaming for many people, and see them through the inevitable summer drought. The fact that you are a cowboy will sell this game instantly to many, but it must be purchased with an open mind and not simply though of as a quick GTA knock off. Following in its predecessors footsteps however, Red Dead Redemption is damn near perfect. The world in which you will be hog-tied into makes you never want to leave and with a multitude of things to do, it'll be unlikely that you ever will, at least for some time.

What many gamers will think, and want, to be simply a Grand Theft Auto with horses will be greatly surprised but not dissapointed. What Rockstar have been known for for so long is ever present here; massively open and unqiue landscape, compelling story, solid mechanics and excellent graphics. Finding faults with this excellent title would prove to be nothing more than a 'nit-picking' exercise as it is pretty much the perfect game. This is a game that is guaranteed to be faithful and one that you must, and will, see right through to the end.