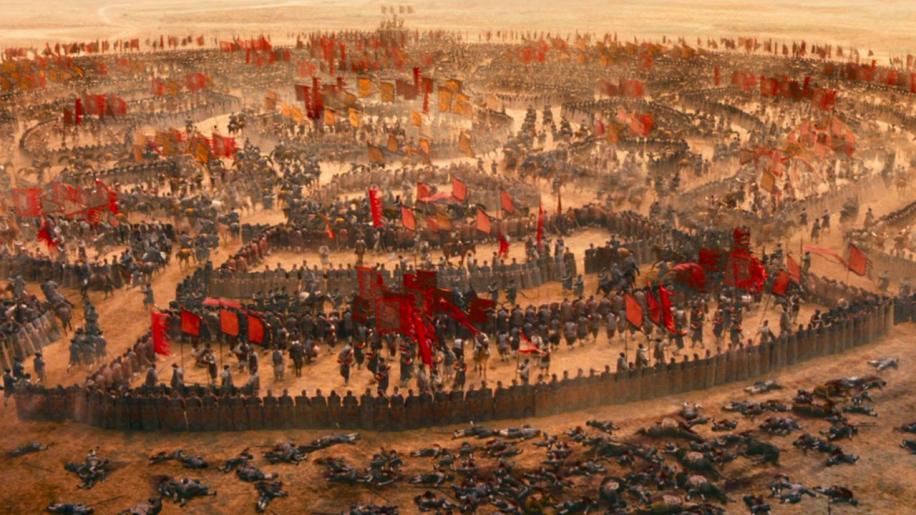 John Woo's career to date is a somewhat chequered affair. For a man to start out as one of the most highly regarded and explosive storytellers of the small island of Hong Kong, it came as a great blow to many, seeing him eschew his homeland in favour of attempting to carve out a name for himself in Hollywood. He upped sticks and headed for America and in the process not only left his homeland, but also lost many admirers due to that decision. There are many reasons one could attribute to his flying the nest, the questions surrounding how film-making would continue in the newly repatriated Hong Kong under Chinese rule has popped its head up numerous times, but the fact was that the timing was simply right for a change. Woo is primarily an optimist and strode towards a fresh challenge - like many (foreign) directors and actors, if you miss the moment when Hollywood comes calling, the opportunity to make the kind of movies within your remit and under the right circumstances may not, if ever, come back around again; witness Jackie Chan's stuttering breakthrough into Western films.

Perhaps with the itch scratched, Woo was able to reflect upon the continued success of Hong Kong film-making and the freer than expected artistic licence given to directors by the Chinese government. Whatever the reasons, we can simply thank our lucky stars that he has returned to producing stories in his native land. Even the most ardent Woo aficionado would find it hard to argue a case that his English language pieces have had anywhere near the panache and charisma of his earlier work. Perhaps there is something lost in translation that makes otherwise fine Eastern directors such as Ringo Lam and John Woo think that those fit to fill the boots of Chow Yun Fat in the West are such actors as John Claude Van Damme and John Travolta - never a wise decision - meaning, with the director's ensuing work, the mainstay of the 'Heroic Bloodshed' genre was always missed by his absence.

So what type of project finally tipped the scales and managed to draw the prodigal son back to his homeland? One of the so called four great classic novels, alongside Journey to the West, The Water Margin and Dream of the Red Chamber, Romance of the Three Kingdoms is a tale that has proved a perpetual source of inspiration for media of all kinds in the East, from films to videogames. A 14th century text, it stands at over 800,000 words and covers the events of more than one hundred years of Chinese history, during a key time in the nation's development - the end of the Han dynasty, around the year 208 AD. Essentially, the Han emperor has been convinced to empower his Prime Minister Cao Cao with dominion over his armed forces, who then proceeds to use this new found might to invade the other territories. The ensuing war is the drive of the story.

Thus, the lure of bringing such an acclaimed classic tome and ever present piece of the countries' collective consciousness to the silver screen must have been too great an opportunity to miss. That he was given the financial backing to make it the most expensive film in the nation's history is a clear indicator of not only the project's size, but also the esteem with which Woo is still held in his native land. The mix of source material, returning director in need of some redemption with his fans and a budget that will allow for battles on a massive scale to be orchestrated all combine to make a truly mouth watering mix, not only for Eastern film fans, but also for movie lovers the world over.

The ground work was clearly well laid, but all would be for nought if the finished article was not up to his previous standard. The key question remains - how well does the culmination of this potent fusion of story and director stand once all is said and done? Telling such a story could become convoluted, particularly when one comes at it from the perspective of a Westerner unfamiliar with the original material upon which Red Cliff is based. Once you add in the large amount of characters, many with similar sounding names, all holding their own distinct thread to the narrative which they weave slowly, inter-crossing each other throughout the film's 145 minute run time; the result of which is a potentially confusing yarn. There are occasions when I questioned who was originally allied to whom, but this passed as the battle lines were drawn once the film has established its setting - and what a setting it is! From the sumptuous wardrobe that ranges from delicate robes and intricate hairstyles, right through to the battle scarred armour adorning the host of soldiers, every last nuance of period China has been recreated and wrung from the very fabric of the text to come pouring onto the screen. It rivals the best that Hollywood has to offer when it comes to the sheer authenticity of backdrop that the players inhabit. Blades shimmer with ornate hilts, commanders carry traditional feather fans, warships have carved faces bearing out from their bows and battles are conducted to the tune of the beatings of well aged drums that look as if they have witnessed a thousand just like it. The scenery also plays a great part in enhancing this sense of age and grandeur. Long slow sweeps and aerial shots give us glimpses of lush and verdant mountain ranges, fortresses and dusty windswept plains. Woo creates a level of serenity with these postcard moments that helps both calm the waters for the viewer and yet raise the tension as conflict of one kind or another is never too far away.

This is probably where most will either applaud or deride Red Cliff - the way in which it depicts conflict. As this is primarily a period piece about a grand scale war that ravaged one of the world's largest countries, one might assume that the majority of our time would be spent knee deep in blood and fury, entrenched on the battlefield. Once we factor in the director's previous penchant for splashing the red stuff from pillar to post then one might almost take it as a necessity. However, things don't quite pan out in such a manner. There is still a good degree of carnage to be witnessed, but it bookends the central story rather than overpowering the narrative by its presence. I have long been an avid fan of Woo's but I'm sure even the most ardent aficionado would struggle to make a case for him being a truly mature film maker based on many of his previous Chinese cinematic hits. With Red Cliff he seems to have finally found the ability to quell the moments of intense violence and find a deeper level that doesn't focus entirely on machismo and doves. Much of the film is spent observing the political wranglings of the various forces as they seek to outmanoeuvre each other. The despotic Cao Cao would have been all too easy to depict as an insanely maniacal tyrant, yet he is shown with a tangibly human side full of emotion as the many layers are very slowly revealed.

All the characters could easily have had double the screen time and still we would be little further into their psyches as to understand them completely. For such a mammoth text, the transition to film must inevitably bring with it some short cuts but these are well made and concessions that merely allow for the story to flow rather than become bogged down in a narrative of multiple characters that by rights would be better served by a 10 hour mini series. Woo has never been too great at fleshing out the female roles of his films but there is at least a true presence to the fairer sex and they are far from two dimensional. It is this that can make one almost forget that one is watching a John “heroic bloodshed” Woo film. The women bring with them a tenderness and romance that is handled in a manner I didn't think the director was capable of, being almost Wong Kar Wai-esque in his orchestration of the love scene and the relationship around it.

Don't be under the misapprehension that everyone's favourite slo mo bullet flinging director has gone soft though. When the action does unfold, it is both spectacular and inventive. The final act brings with it the main set piece - an elaborate coming together of forces that includes more ingenius tactics than you can shake a chopstick at. The use of battle formations is captivating and the aerial photography employed to let us see these vast amounts of troops rearranging themselves into intricate patterns is a joy to behold. Mounted cavalry race through an ever shifting maze-like construct built from thousands of men. The to and fro of these scenes are more akin to a chess game than the all out carnage we have come to associate with period warfare epics such as Braveheart. If it wasn't for the ensuing bloodshed, this phase of the piece could almost pass for a work of art in itself, such is its rhythm and flow. All elements of this film come together perfectly, to create a feel of the grandeur and importance of the original text. It is both gripping in terms of story as well as opulent with its visualization. The acting never wavers and though Chow Yun Fat isn't present, Tony Leung (who had previously collaborated with Woo on Bullet in the Head and Hard Boiled) is, as expected, a strong figure. Perhaps even upstaging Leung is Takeshi Kaneshiro, who together with Zhang Feng Yi create two strategic masterminds that are at odds with one another, yet have distinct similarities and pull the viewer into the action through their restrained emotions. If anything is said to be a fly in the ointment then one might consider the comedic elements a touch whimsical and far fetched, but they lighten the mood and are fleeting in their duration. Overall, this is a finely woven tapestry of a story that sets up the scene for Red Cliff 2 in a stunning manner. The sequel may have the central battle to which this film owes its name, but this stands up to scrutiny as a great piece of cinema in its own right. A mature action epic and a return to form for John Woo - who knew he'd be so adept at bloodshed without the gunplay?