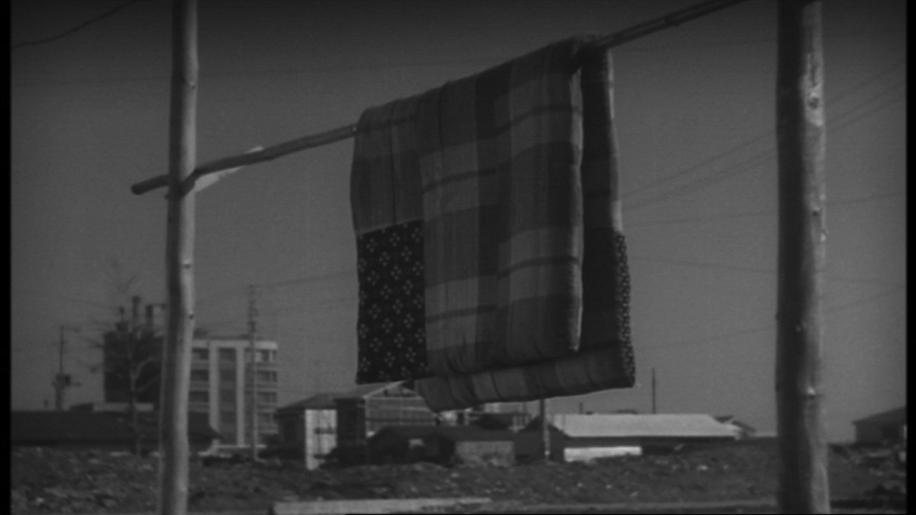 Record of a Tenement Gentleman Movie (1947)

Yasujiro Ozu is a legendary filmmaker; his name is now mentioned in the same breath as Bunuel, Bergman and his contemporary countryman, Kurosawa. His classic movie Tokyo Story was recently declared the Top Film of All Time in Halliwell's Top 1000 films list and his other movies are now being offered up for rediscovery and appreciation. He's a critically celebrated character then. And, do you know what? Until receiving this little box set from Tartan Video, I'd barely ever heard of him. Tokyo Story, I had certainly heard of, though still haven't had the privilege of seeing. But now, after watching the two mini-masterpieces contained within this second Ozu collection, apparently from the director's golden era just after the Second World War - Record of a Tenement Gentlemen and Flavour of Green Tea over Rice - I resolve to rectify that as soon as possible. Quite simply, folks, I went into these movies with no prior knowledge of them, and therefore no grand expectations. And, it is with tremendous pleasure that I can reveal that my open mind was hugely captivated and entertained from start to finish with both movies. So, without further preamble, let's discuss what I found within Volume 2.

“The moon has shadows once in a while. So do human beings.”

Starting with Record Of A Tenement Gentleman (1947), Ozu here presents us with the tiny tale of young boy, apparently abandoned by an uncaring father, found and brought to the poor shanties of Tokyo by Tashiro (Chishu Ryu) and given to the scowl-faced widow Tane (played wonderfully by Chouko Iida) to look after. That he cries a lot and wets the bed drives the bitter woman to the point of trying to abandon him herself in the hope that someone else will take him in. But, unable to shake him, she is forced to keep him for longer than she expected. And, inevitably, tensions rise and upsetting misunderstandings ensue along the way ... but we all know that a bond between the two will ultimately develop. Sounds clichéd, doesn't it? Trust me, it is anything but, and it is all down a beautiful and gently comic screenplay, natural and realistic performances and a subtle approach that steadfastly refuses to go for the emotional jugular like so many other movies would have opted to do.

“Get me some shells. I want them as souvenirs.”

Ozu's approach is gentle and unobtrusive. He merely sets his camera up and lets the cast get on with it, to the point where I often felt like I was spying on real people going about their everyday business. This effect seems to be his main modus operandi, allowing us into his perfectly realised, small-scale world of unexciting lives and incident-free situations that should be boring, but prove to be anything but. A get-together over “... the real sake!” results in talk of peep-shows and a terrific impromptu cup and chopstick jamming session that could certainly have been a forerunner for karaoke. A simple request for a rubber hose delivers more observation of the era and its values than many contrived scenes in other films of the time. Hohi Aoki as the unappealing little urchin is genuinely irritating at first, but nevertheless elicits sympathy whenever Tane chastises him - “I'll bite you!” she threatens at one point and even throws things at him in an attempt to ditch him among the sand-dunes - and the image of him fanning his latest wet blanket is touchingly amusing. The depiction of life in the poorer elements is never spoon-fed, never political. These people are basically happy and are content enough to just get on with their lives, come what may. When another tenement denizen gets lucky after her son buys a lottery ticket, Tane just scowls a little more fiercely when her adopted charge fails to bring her such good fortune. Besides, when she gets a good deal on a load of potatoes she just has him carry them.

Next to this admittedly slight story, Ozu presents us with a pleasingly unsentimental view of the matters of these simple folk of few pleasures. They have the same dreams and ideals that we all share, the same woes. His film is neither haunting nor lyrical, yet strangely mesmerising all the same. Measured, languid scenes ease the story along at a sedate, Sunday afternoon pace which helps maintain an almost carefree tone that is fresh and enticing. His filming benefits from good, but un-elaborate compositions, his framing favouring people over setting. Camera movements are rare and his shots are always dignified and steady, gaining strength and resonance purely from the wealth of character on display. I'm tempted to call his style theatrical, as so much of it just revolves a modest number of players in one setting, usually the home. But, when the boy disappears after one telling-off too many and poor Tane discovers that her armoured façade is crumbling, and goes out to search for him, Ozu opens up to give us some nicely picturesque shots of the city. This search through the streets also opens the gate to Tane's emotions, although wisely, these are kept largely in check with Ozu adamant not to pander to formulaic heartstring-tugging. And, strangely enough, this low-key approach is exactly the element that threatens to choke you up come the finale, which packs an emotional wallop that Ozu still manages to restrain. Wonderful stuff, despite having a title that seems to have little relevance to the story and a final coda that comes across a tad too heavily for all that has gone before.

The second film in the set is 1952's Flavour Of Green Tea Over Rice, and it is this tale of slow marital dissolution and the search for a love rekindled that is, perhaps, the most spellbinding.

“Darling, don't blame me for being hungry at work again.”

Again, simply told with no sense of urgency, drama or showboating, Green Tea works a brand of magic that is deceptive and intoxicating, drawing you into an almost cosy, unhurried trip through marital melancholia. A middle-class couple have come to realise that their arranged marriage is losing its excitement and romance. And what compounds this is the advent of their niece's own impending arranged marriage - a tradition that the young Setsuko (a luminous Keiko Tsushima) is not at all keen on. Even less so when she hears her aunt, the alluring Takeo (played brilliantly by Michiyo Kogure) belittle her own husband and generally paint a depressing picture of married life in general. Taking to lying to her bland husband (played with great depth by Shin Saburi) to get away from the house and see her equally demoralised married friends for weekend spa sessions and the like, Takeo is slowly, but surely, withering now that the spark of love has been extinguished from her life. Her husband, whom she has nicknamed Dull-chan, is reliable and has a good, steady job. Their home is lovely and they even have a maid. But staleness in their relationship has soured her terribly. Whilst her friends, and her niece, have embraced modern fashions and a seemingly very western lifestyle - baseball games, anyone? - she wears traditional kimono and still clings to the values that have so obviously wrought havoc on her intimate relationships. That some serious soul-searching is needed by all concerned provides the impetus for Ozu's take on post-war societal ideals and the dangerous fragmenting of love and commitment. Tradition versus modernisation. Devotion versus duty. Some heady themes but, as with Tenement Gentlemen before it, Ozu keeps the proceedings light and interesting, letting his tone and the power of slow-burn emotion be absorbed at an almost genteel pace.

Dealing here with a much larger cast and far more varied scope of settings - from the mountainside health spa to the city theatre, bustling offices to the varied atmospheres of the different homes - Ozu creates a bright city that is teeming with life and hope, the opposite of how his characters feel. His framing is once again a joy to behold, interiors often shot from the low level of the little tea-tables, giving a sense of space and dimension, particularly to Takeo's lovely house - which will only serve to compound the distance between herself and her husband as the film progresses. He also allows much more movement of the camera this time, sweeping us down corridors and through rooms, even along the seats of a sports stadium. Everything he does here in Green Tea feels that bit more assured and painterly, although he maintains the luscious and leisurely pace of Gentleman. With tales as simple as this, there's no need to hurry or contrive. As someone in the film even says at one point “Simple is good. That's my principle.” That could almost be Ozu, himself, talking.

“You can't force her to marry if she doesn't want to. It'll only make another married couple like us.”

The loneliness of the marital home is a universal and timeless concept - it could be shown in a prehistoric cave or a gleaming space-station. Ozu's depiction of it is no less tragic, or beguiling, but what sets his tale apart is the singular lack of the conventional tears and tantrums usually inherent to the situation. Instead, he crafts a languid, and inexorably slow, dissolution of feelings that is inescapable and, halfway at least, only to be expected. The mood he affects gets slowly under the skin and is so delicately done, that it is welcome to stay there. But it is the performances of Michiyo Kogure and Shin Saburi that dominate the film. Watch out for the exquisite character baton-change that poor Dull-chan and then Takeo make when each of them, in turn, has to experience life alone at home. Their eroding relationship holds the attention without ever resorting to overblown sentiment. That the two have so much to say to one another speaks volumes about their inability to communicate. But the protracted finale, whilst not exactly unexpected, is a delight. The perfect way to a man's heart, as ever, is through his stomach and it is telling that the most intimate and emotional scene in the film is actually never seen, merely recited after the event. Remarkably clever denouement, really.

“I will never call my husband Dull-chan in front of other people.”

Once again, I have to admit that I felt somewhat voyeuristic during much of this film. The performances and the interactions of the characters have a resolutely real and natural approach that makes you feel as though you've just snuck into someone's house to eavesdrop. And, much like Tenement Gentleman, this feels constructed almost like a play, with so much attention lavished on character and the minutia of mood and nuance. But it still transcends the stage with a cinematic verve that sees the cast live and breathe. Enormously well-made and entertaining. I may not have known much about Yasujiro Ozu before watching these two impeccable movies, but I feel privileged to have discovered his work now, and look forward to catching up with more of his output.