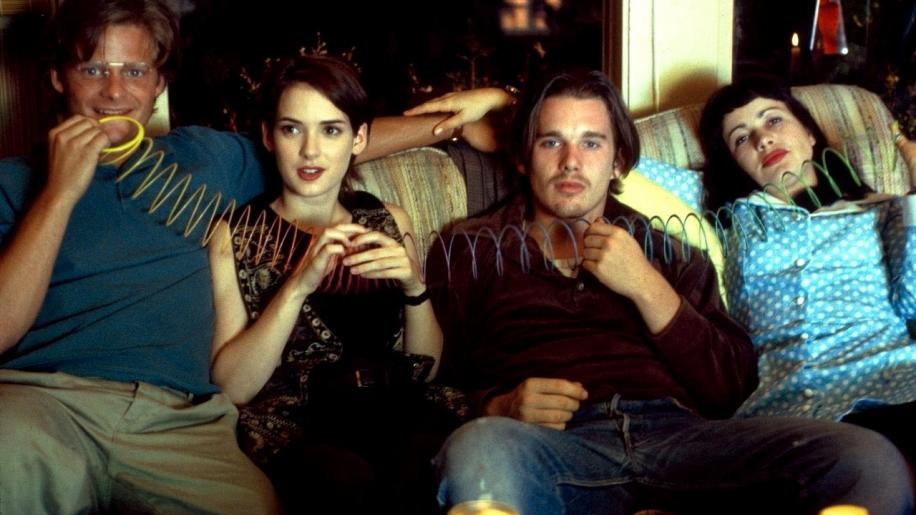 Reality Bites is a hard film to pigeon hole when it comes to a review. Made back in 1994 and starring the then youth actors of the day and directed by an unknown Ben Stiller (who also acts in the film) it was supposed to be a real life statement of a generation lost amongst the commercialism during the post-grunge period in American history. However the movie was dated from the moment it was released and it never hit the financial success that was predicted. This is unfortunate as what is here is a rather well played romantic triangle and coming of age story.

Lelaina (Winona Rider) has just left college along with her friends and should be heading towards a rewarding future, however the reality of life soon hits home when the bills need to be paid. Working for a sleazy cable tv presenter and living with her best friend Vickie who has just been promoted to manager at the local Gap store, she wants to be a director. Lelaina is also secretly in love with slacker songwriter Troy (Ethan Hawke) and it's not long before Troy and Sammy (Steve Zahn as an underwritten Gay sidekick to Troy) move into the flat. Lelaina is working on her way out, a documentary of her friends in a Real world type MTV production, but her boss doesn't want to know. After a road accident with up coming TV producer Michael (Ben Stiller) she may have found the right man for her, but things never run smoothly when in love.

Some of the humour may not work anymore along with some of the in-jokes of the time, but Reality Bites still has a heart to it's story and there is plenty still to laugh at within it's running time. It really will depend where you where in your life in 1994 to know if you will appreciate the ideals of the movie and as I missed it first time around much of the films appeal was no doubt lost on me. If you are a fan then this edition will be perfect for you.