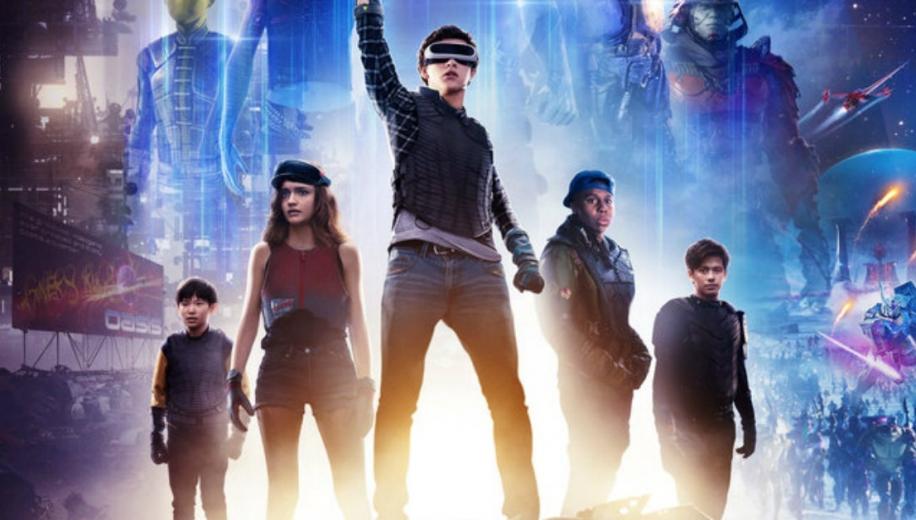 If ever there was a film to epitomise the resurgence of 80 pop culture, then it is Ready Player One. Steven Spielberg’s take on Ernest Cline’s book of the same name is chock full of references, nods, winks, homages and the all-out obvious. It tells the story of a poverty stricken Earth and one boy’s drive to win a hidden game in the virtual world, called Oasis, that everyone inhabits. Only he and his four friends didn’t reckon on the might of the evil corporation hell bent on winning the game for themselves, to ultimately take over ownership of the virtual world.

On the face of it, it is pretty standard fare; a ‘David vs Goliath’, ‘underdog overcoming insurmountable odds’, coming of age story that plays right into the hands of Spielberg’s oeuvre, but with his direction and vision we are treated to a little bit more – the human side and cost to the mechanical might. Whilst there is ostensibly one plot it plays out over the two worlds: the ‘real’ one, where poverty is rife, and the virtual reality one, a game created so that people can escape their depressive reality and where anyone can be anything with riches being won and lost. Upon the death of the creator, a hidden ‘Easter egg’ is released, promising untold riches and control of the game itself, and all the avatars are fixed in a battle to find the clues that unlock the secrets. Thus begins the quest with good and evil vying for supremacy in both worlds.

The film is, then, obviously, two halves, that set in the real world, that in the virtual. And I must say whist the action and exciting visuals are held within the virtual, that never really felt like a ‘Spielberg’ film; it was in the real world that I felt his flair – the struggle, the emotions, the touches that show his hand at work. And whilst the ending is never in any real doubt, the journey there is worth taking. I daresay it will strike a chord with many online gamers whose dual life is full of the same highs and lows and whose persona is both real and not real at the same time. Being philosophical, entertaining and enjoyable, Ready Player One has much going for it. Ready Player One was shot both digitally and on 35mm film using a combination of Arri Alexa Plus and Panavision Primo cameras with resolutions of 2.8K and finished as a 2K DI, which has presumably been used here for this Ultra HD Blu-ray release. The disc presents an up-scaled 3840 x 2160p resolution image in the widescreen 2.4:1 aspect ratio, and uses 10-bit video depth, a Wider Colour Gamut (WCG), High Dynamic Range, and is encoded using the HEVC (H.265) codec for both Dolby Vision and HDR10. We reviewed the Region free UK Ultra HD Blu-ray release of Ready Player One on a Panasonic 65DX902B Ultra HD 4K TV with a Panasonic DMP-UB400 Ultra HD Blu-ray player.


WCG and HDR leave the Blu-ray behind

Being both digital and film, each behaves subtly different when presented on the disc: the digital realm has good detailing; the CGI edges are held firm well into the distance, close up detail is sharp and well defined while backgrounds are gorgeous, but it is not such an upgrade from the reference Blu-ray image. When it comes to the filmed segments, there is a noticeable up-turn in sharpness in comparison: this particularly true with skin texture, clothing weaves and interiors. However, when it comes to the WCG and HDR both leave the Blu-ray behind.

Digital space drips colour; during the first log in, sun-sets, during the disco, indeed any scene you pick will showcase deeper, more defined and vivid colouring. The same is true for the filmed segments, but this has a stronger presence of blue to differentiate it. Blacks give rise to huge depth to the image and hide subtle shadow detail when required. While the white end is even more pronounced to give defiant highlights to the image without clipping.

Digitally there are no issues to contend with, the digital realm is pristine clean, while the filmed sections retain the strong grain and ‘grubby’ feel that differentiates it from the Oasis. The source is also pristine. The English Dolby Atmos track wastes no time in its immersive experience, when Van Halen’s Jump assaults you from the ceiling, drones buzz around the room, the clatter and hubbub of the Stacks is all around as Wade makes his way down, all the while the narration ‘floats’ in front of you. And being an action based film there are plenty of opportunities for the effects to surround you; the opening car chase with the cars revving on the start line, the numerous crashes and explosions, while the various traps go off to capture the cars make for an exhausting ride. Subtler moments are well handled with the rears and overheads picking up on ambient effects, whether that is street hustle and bustle, office chatter or computer gamers working the puzzles in IOI. The score is well layered into the mix and utilises all the speakers. Bass is not very dominating, there are plenty of LF effects and the sub is kept very happy, and whilst there are a number of decent rumbles, overall it was dialled back a bit compared to some of the more recent action fests. The UHD contains no extra features; they are all found on the included Blu-ray.

The '80s: You're the Inspiration – Five minutes with cast and crew discussing their particular love of the 80’s.
Game Changer: Cracking the Code – Nearly an hour’s worth of making of documentary that covers pretty much all of the normal bases with interviews, behind the scenes footage and discussion on development, cast, locations, effects and a pretty in-depth piece.
Effects for a Brave New World – 25 minute feature that, again, goes pretty in-depth into the effects required to create the vision.
Level up: Sound for the Future – 8 minute short delving into the sound design and all this it entailed. High Score: Endgame – 10 minute feature that looks at Alan Silvestri's contribution to the score.
Ernie & Tye's Excellent Adventure – 12 minutes with Ernest Cline and Tye Sheridan as they discuss the film ahead of its Austin premiere. Ready Player One is Steven Spielberg’s take on Ernest Cline’s book of the same name. It is a ‘David vs Goliath’ coming of age story that plays right into the hands of Spielberg’s oeuvre. It is also chock full of 80’s pop-culture references! It plays out over the two worlds: the ‘real’ one, where poverty is rife, and the virtual reality one, a game created so that people can escape their depressive reality, and through Spielberg’s skilful direction and a knowing script we discover which one is the best place to be.

The 4K UHD set from Warner is a pretty decent affair. The up-scaled picture from a 2K DI is still exceptional, with terrific detailing and WCG and HDR giving rise to an immensely satisfying image. The Dolby Atmos surround track pulls out all the stops to be as immersive a possible, not only in the numerous virtual action set pieces, but also in the real world with all of its nuanced ambiance. Extras are contained on the included Blu-ray and are quite extensive.