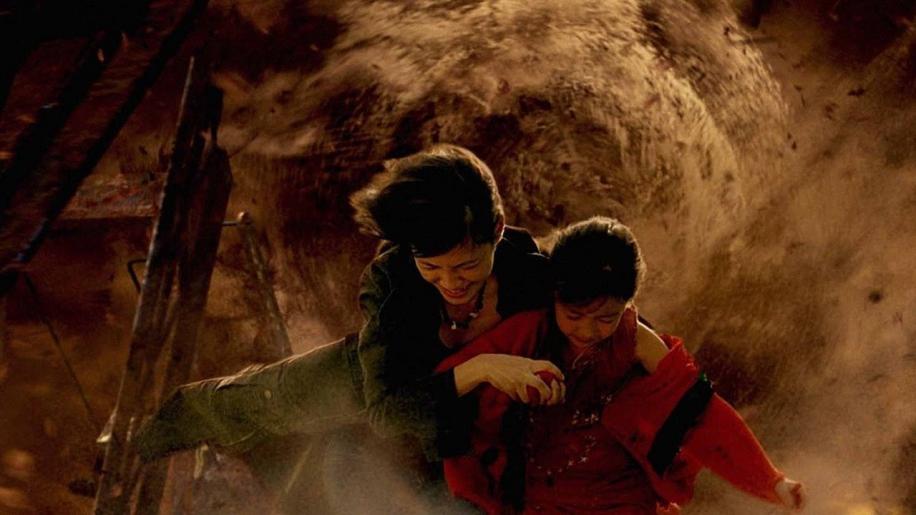 There's been some excellent works of horror from our far eastern cousins in the recent years so Gwai wik or Re-Cycle has a lot to live up to. Even the powers that be are finding these offerings ripe for the picking as many are shipped over the water to Hollywood where, invariably, substandard versions appear. Oxide Pang Chun and Danny Pang ( the Pang Brothers ) have a few feature films under their belt, usually working together (but not exclusively) with Bangkock Dangerous and The Eye probably being their best known features to date (in this house anyway).

Tsui Ting-Yin (Lee Sinje) is a successful author whose romantic novels have now been placed under the spotlight of the silver screen. At a press conference discussing her book to film release it is let known that her next venture she will dive into the supernatural, a good old fashioned ghost story. She starts to write the notes for her next novel and perhaps because of a friend's comments she thinks she starts to see the characters of her novel come to life; they almost inhabit her apartment with her.

She leaves one day, taking the elevator to the ground floor yet this is not where she gets off. Thinking she has reached her desired floor she steps out, only to find herself in a world of abandoned items and beings. In this world she encounters many strange pitiful beings, some desolate souls and a couple of people who want to try and help her leave; try and help her return to her own world.

I have to admit I love a ghost story, the usual hack and slash that seems to dominate the western horror market these days leaves me a little cold so I was looking forward to this feature very much and in some ways it never let me down; in others though it did. After the slow preamble of introducing us to the characters who will play the leading parts we finally see Ting-yin settling down to construct the beginnings of her novel. Writing drafts, discarding them, rewriting new characters and eventually we come to realise that these characters are actually coming to life. They don't jump out from the closet, they inhabit the shadows, you can just see them; blink and you will certainly miss the few that are in there. This is much what Ting-yin is experiencing herself; did she really see something or was that just a figment of her (and our) imagination? I felt this part of the movie was superbly executed, really sending some shivers down your spine and totally allowing you to relate to the main character's feelings as she looks into those corners of her dimly lit apartment.

All of a sudden though the direction shifts somewhat, she is warped into another dimension. Initially you feel that this is just her vivid imagination running wild with itself but eventually you come to realise that she's here essentially for the rest of the film. What follows next is her journey to try and return to her own world. Even this world has the possibility for scare upon scare and to it's credit there are more than a few; this world though is not an examination of how the directors can get you sitting on the edge of your seat, it's their plain intent at this part to get you to think about a few deeper things. You see this world is the world of the abandoned, old toys which have been thrown away, graves which have never been tended, the forgotten of the world. The directors are asking us to remember all of these things, to try and get us to think not about the things we generally throw away but the people we can all throw away during our lives.

It works to some degree but it ends up just being a little too preachy for my own liking. There is a scene where Ting-yin is guided to her destination by young Ting-yu (Zeng Qiqi) and they have to cross a desolate graveyard, the inhabitants of the graves sitting on top awaiting someone just to to visit them. What starts off as a good enough scene with Ting-yin and Ting-yu figuring out how to cross this valley of death, it ends up almost as a scene from a Romero Dead feature with our two heroines escaping the clutches of the rampaging zombies. It's just a little scatter brained at times, somewhat lacking in overall direction or focus.

There is excellent CGI use in this feature, ultimately used to create the world which Ting-yin steps into and shot on a limited budget it just goes to show what can be done with some good artists and an excellent imagination and from this point of view the production staff have to be commended somewhat. The cinematography is well handled bring out the shadow areas and heightening the tension in the early scenes and certainly adding to the atmosphere of this piece. Whilst in Ting-yin's alternate dimension there is good use of audio, again adding to the atmosphere.

In the end though a film which never really lived up to its initial promise and that was somewhat of a let down. It started so well, it ended on a damp squib.