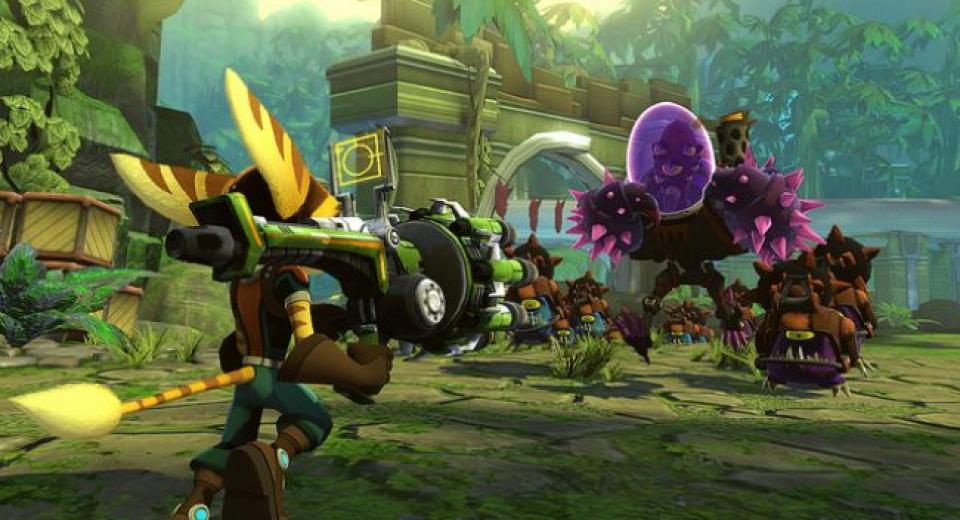 Who’d have thought that Ratchet and Clank (R&C) was ten years old? Whether it be on PS2, PS3 or PSP/Vita they have enjoyed success across all of PlayStation’s platforms. It’s fitting that to celebrate the tenth anniversary two R&C games have been released this year; we saw the HD Trilogy earlier in the year and here we have their latest adventure Full Frontal Assault.

It’d be nice if developer Insomniac Games could actually decide if this was called Full Frontal Assault however as the Trophy list suggests so yet the disc says Q-Force on it. I’m not one to be picky but this business of having different names for different regions is a tad ridiculous and is shown by Insomniac’s own confusion as to what to call the game. Not only that but Full Frontal Assault sounds like a comedy mission name from Grand Theft Auto of old or the recent Saints Row series.

The less said on this the better though and onto the game which is what you would usually expect from a Ratchet and Clank game; it’s cheeky and it’s fun. But there is a twist as this title is less of an adventure and takes on a more ‘attack & defend, turret defence’ type of gameplay which seem to be popular at the moment. Gone is the exploring of old and jetting off to planets at the opposite end of the galaxy in favour of travelling from planet-to-planet in order to restore order by wiping out any hostile threats and protecting the main command centre from incoming waves of enemies. This isn’t necessarily as bland as it sounds as Q-Force Frontal Assault blends this defensive nature along with a small addition of worldly exploration. Once you have landed on your selected planet, you can purchase turrets initially for basic protection then go out and take on free-roaming enemies and collect nuts and bolts. You can gather your currency by killing enemies, breaking crates and destroying other objects around the planet.

As any self-respecting R&C fan will know, these nuts and bolts are used to purchase ammunition and upgrades within the game. The same applies here as turrets and other forms of defence cost bolts and trust me, you will need plenty of them in order to protect your base when you progress further into the game.

Truth be told, the bits where you go out and explore are the best as this is what you associate with Ratchet and Clank based on their previous outings. Sadly the environments aren’t that huge and are a bit boring compared to titles such as All 4 One or Crack in Time. It’s a shame to say this as they are well detailed and look absolutely fantastic which is something Insomniac have been great at throughout the pairs' adventures. For some reason, the story is very light in this outing with no more reasoning than the ‘Q-Force is bored’ behind going out and saving planets from being held captive by alien threats.

As far as the controls are concerned there are no qualms on that front as they are as tight and rewarding as you would expect. Whether it be the melee combat or blasting enemies with one of your many weapons there are no issues and you know that should you come a cropper from one of your enemies it’s probably down to your timing rather than the game not handling well. From your handy blaster and wrench to the more brutal Devastator and Doppelbanger there is a wide array of weapons available that have been in previous outings and any returning player will be instantly familiar with them all and their abilities. They level up in the usual way of the more enemies you kill with them then the more experienced you get with them and they become more powerful and gain new fire modes.

The weapons have to be unlocked however and aren’t available to you at all times. On each planet you land, there are generators which you must power up and choose which gadget it will dispense to you meaning your selection may ultimately make you win or lose the battle for control. A balance of powerful weapons with those that hold more ammunition is often the best way to go as holding higher powered weapons can result in a shortage of ammunition.

The mechanics of going out and exploring tied with racing back to defend your base makes it feel as if you do a lot of to-ing and fro-ing unnecessarily and would be made a lot easier should you have Clank or Captain Qwark assisting you. To that end, the co-op mode solves that problem by allowing one person to do the running about whilst the other can hold back and defend which is probably the best way to experience the game rather than going it alone. Via the PlayStation Network you can also pit yourself against players across the globe by taking it in turns to scour the planet for bolts and upgrade your defences before the enemy attacks you and then you can do the same should your base hold up to their offensive manoeuvres. There aren’t many maps or modes to play though which makes the longevity of the online component rather limited and the fun factor of playing with someone through the campaign cannot be matched here.

As with all the latest Sony exclusive titles, Full Frontal Q-Force supports a 3D mode in the hope that the passing fad might still catch on with owners of fancy 3D sets. Whilst the 3D looks quite good and helps when it comes to negotiating past scenery and targeting your enemies, the image however looks awful when in this mode. The picture is severely washed out and quite grainy in some instances which is a shame as the effects are quite good when in the midst of combat or a flurry or bolts.

But whilst there are some positives to be drawn from this, you can’t deny the fact that this is unquestionably one of the weakest titles in the series. The fundamentals are there like always with Ratchet & Clank titles but there’s no ambition or a sense of exploration and adventure. Insomniac have fiddled with a winning formula and sadly for them it hasn’t quite paid off and, speaking on behalf of the entire fan-base, I think we would have been more than happy with just the HD package this year.

Hiding Behind The Sofa

This isn't a bad game as such however the previous couple of outings for the Lombax and his robotic partner haven't been that strong either, and this is definitely one of the weakest yet. Fortunately there isn't a full retail price tag placed on this which makes it affordable for those that want to have a punt on this one but it serves as nothing more than a reminder that we need another full-blown title in their series to bring it back to life.