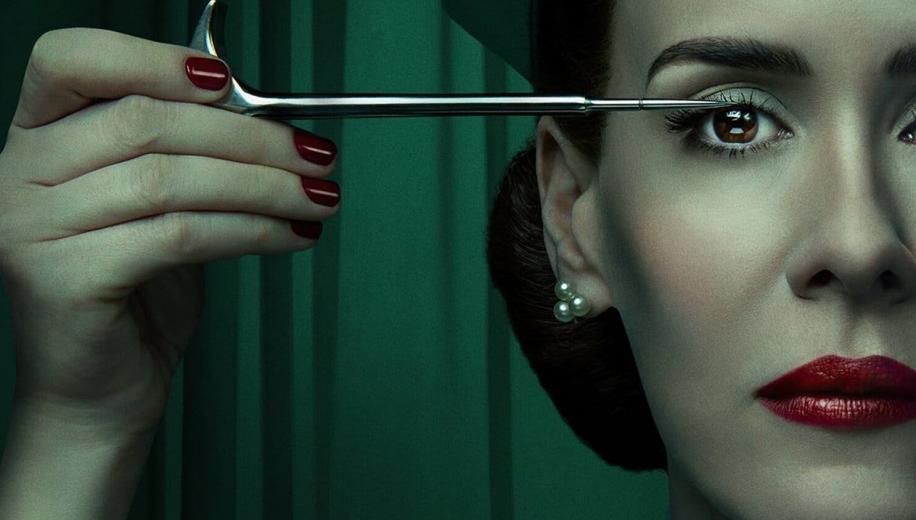 More American Horror Story than anything even tangentially related to One Flew Over the Cuckoo's Nest, Ryan Murphy's Ratched is full of Bernard Herrmann's sound and Sarah Paulson's fury, but offers nothing new, and plenty old.

Milking old classics for modern spin-off franchises is pretty par for the course these days in the wonderful world of "Hollywood" ideas.

"Let's have a prequel show to Robocop."
﻿"But... before Robocop, they're just... cops."
﻿"Right, but we can explore the build-up. Like have some cop lose an arm and get that replaced."
﻿"I guess that could be a cool throwback to the original 'lose the arm' scene."
﻿"I've never seen it."

In mining ideas, some genius exec must have had fond memories of One Flew Over the Cuckoo's Nest, and figured that the power-hungry antagonist character of Nurse Ratched was ripe for a spin-off show. Maybe someone even suggested that we could see how a character like that could come to be so coldly vindictive; what fashioned such an entity.

Then they got Ryan Murphy involved and subtlety went crashing out of the window.

Murphy's American Horror Story: Ratched is very familiar territory, but unfortunately not so much for fans of the 70s Jack Nicholson classic. No, it has far more in common with Murphy's mainstay, less interested in psychology, psychiatric practices and psychiatric malpractices, and more interested in cartoon villainy, blunt force characterisation, lurid melodrama, gaudy visuals, and thudding overwrought scoring.

These are tired ideas, twenty years old, with about as much finesse as a blunderbuss

Nurse Mildred Ratched is determined to get a job an a psychiatric facility, no matter what the cost. After all, in four seasons time she's going to be the bane of one particular inmate's life, so she simply must get this job. What she is in awe of are the 'advanced' medical techniques being used to 'treat' patients - drilling holes in their head, pushing ice picks in their eyes, boiling them in water and then freezing them in ice - in a hope to cure such disorders as being a failed actor, or being a lesbian. There's a priest-killing murderer in the house too, but he's not there to be tortured into rehabilitation; he's better off being tended to by willing nurses. He is, after all, Ratched's brother.

What would an American Horror Story series be without Sarah Paulson? What's that you say? This isn't American Horror Story. I beg to differ. Let's see. We've got Paulson in the title role. AHS's Finn Wittrock and Jon Jon Briones in the two next most important roles. Oh, and it's set in an asylum where the patients are basically being tortured by psychotic hospital staff. Wasn't season 2 of AHS...? Well, if it ain't broke.

The trouble is, it is broke. These are tired ideas, twenty years old, with about as much finesse as a blunderbuss. And what's with setting the whole thing to the seminal, iconic score of Cape Fear? On. Repeat.

Murphy is an absolute master at putting together a game ensemble cast prepared to go over and above to make you hate them all; he's a genius when it comes to writing deeply unpleasant characters, who very infrequently do something vaguely human, and normally eventually get tortured to death. Credit to him, he delivered a semi-intriguing, resolutely disturbing experience for the first few seasons of AHS but twenty-nine seasons later and this spin-off just feels tired and old, and you're begging for Mitchum (or De Niro) to pop up and terrorise this motley cast of crazies, as the score promises.

Halfway through the season and you'll likely feel suitably dirty. You probably won't be all that interested in Sharon Stone's Mason Verger-esque vengeful heiress, a wasted Corey Stoll as the would-be angel-of-vengeance, a wasted Amanda Plummer as the tiresomely winey motel owner, Wittrock doing his standard AHS Wittrock serial killer schtick, Paulson being - well - what she's become synonymous with for the past decade-plus, and a lecherous, and also wasted Vincent D'Onofrio who you'd be better off watching in a re-run of Netflix's Daredevil TV show.

And what's the point? Well Murphy promises that, in no less than four seasons time, we will meet McMurphy (Nicholson's iconic character). Great. Can't wait. In the meantime, I guess Ratched will boil a few more people alive, AHS-style, because that's what everybody really thought was the backstory to her character - that she literally buried the bodies of a dozen people she didn't like on the run-up to One Flew Over the Cuckoo's Nest. Whilst looking miserable as all hell. That she was a full-blown serial-killing psycho nurse. It was so obvious.

Here's hoping this tired and pointless show never makes it that far. Although then we'll miss out on what famous Herrmann score the next season will use for its entire 500 minute runtime. How about Psycho? Too on the nose?