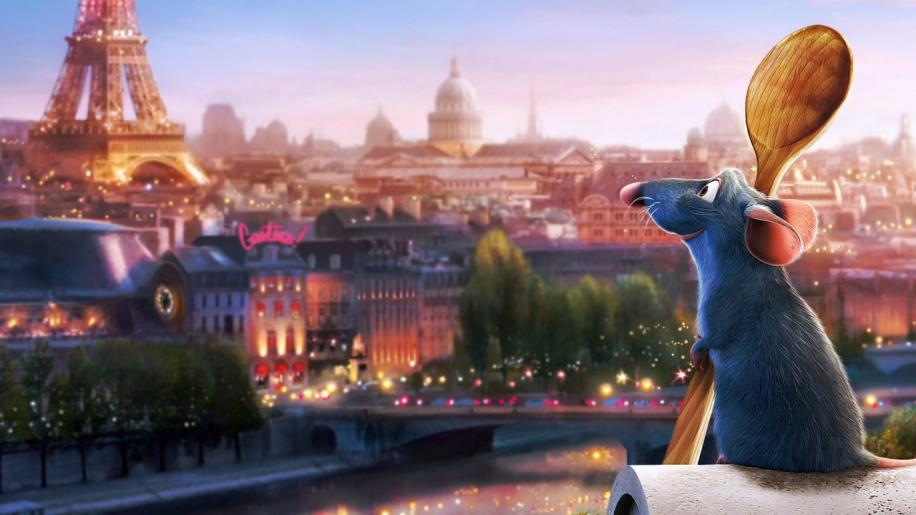 There's a marvellous scene in Toy Story 2 when the old guy comes in to repair and spruce up a kidnapped and slightly the worse for wear Woody that is a beautiful marriage of delicate music and animation so clinically precise, ordered and polite that it seems to make the hairs on the back of your neck rise it is so detailed and delightful. Well, imagine that visual and musical frisson recreated for an entire feature length movie, and voila ... c'est Ratatouille. Cruelly overlooked and underperforming in the States, even scuttling about the skirting boards of the British box office - well, considering that this is a Pixar movie, that is - Brad (The Incredibles) Bird's second-helmed production for the studio after his cult debut with Warner's The Iron Giant is actually a magnificently evocative and slightly left-field production that is a wondrous experience from humble start to poetic finish. I saw this with my six-year old son, what seems only a matter of weeks ago on its UK theatrical run and despite a large advertising campaign and the usual product endorsement that had lined the shelves for over a month beforehand, we were practically the only people at the showing. Despite rave reviews from the usual suspects - Jonathon Ross and a couple of well-known UK movie mags in particular - Ratatouille singularly failed to ignite the public consciousness of the young and the young-at-heart with a mystifying aplomb. Well-liked, yes, but hardly the bonanza it ought to have been. Even the usual toys and school lunch-boxes seemed to idle, unwanted, amongst overlooked cardboard effigies of the film's whiskery star.

Are people that put off by scampering rodents that they would pretend indifference towards one of the most entertaining and clever animation epics to have come along since, well, Pixar's last entertaining and clever animation epic. And there, perhaps, we have the crux of the matter. The great “Cars” failed to haul audiences along for the ride, as well. Another smart film that dared to be a little different, “Cars” met with a strange ambivalence that confounds me to this day. But its bold departure from the normal pell-mell, event-escalation that would usually typify an all-out animated feature from the likes of the lofty Pixar is exactly what leads us into Ratatouille's soupcon of trend-bucking. With this food-fixated fable, Bird and Co. opt to soak in rich, redolent atmosphere, placing their penchant for savvy characterisation and their trademark in unusual juxtapositions of race, species, locale, ethics and message once again along a path less trodden or, at least, less expected to be trodden by the popcorn-munchers. Then again, isn't part of the joy for a lot of people discovering the gem that may have been perched beneath theirr nose all the time without them even realising it? And if the aroma of this softly-simmering classic hasn't begun to win you over already, then its little taste of honeyed heaven is sure to claim you once you take a bite.

“Food is fuel. You get picky about what you put in the tank, your engine is gonna die. Now shut up and eat your garbage!”

Brilliantly exploiting the current vogue for celebrity chefs and the never-ending Hell's Kitchen-style exposés of what it takes to thrust oneself into the fiery maelstrom of a busy restaurant cooking arena, Bird's story (he also wrote the screenplay) reveals the ambitious determination of Remy (Patton Oswalt), a rat with a nose for gastronomic excellence and a creative talent for flavourful concoction that is more divine art than culinary science. Much to the dismay of his wary, race-preserving father, voiced by the great Brian Dennehy, Remy is enthralled by the humans he sees. They taste and discover things, piquing his interests particularly when they prepare food until, for Remy, it becomes an obsession to get in amongst the ingredients and rustle up something of his own. Having learned much from the master-chef Gusteau (Brad Garrett) from peering in at his legendary TV show through windows and from a perch high up on a country kitchen shelf, Remy is devastated when he hears news of the esteemed cook's death and then, when a frantic set of circumstances sees the rat colony hastily evacuated, is awestruck when he finds himself washed up, quite literally, outside the very restaurant in Paris where Gusteau once held court. With the intoxicating smells and fantastically intricate operations taking place before him in the hustle and bustle of the kitchen, he cannot help but place himself right into the thick of the salivating action when the diminutive “ghost” of Gusteau, himself - actually a cunning conceit from Bird in that he is merely a figment of Remy's imagination - gives him a gentle nudge in the right direction. Soon, Remy has done the unthinkable and transformed what would have been a disastrous soup into a dreamy delight and, quicker than a swish of his tail, he winds up training the idiotic and clumsy young Linguini (Lou Romano), useless at taking out the garbage, let alone cooking, in the essence of high class cuisine. Together they intend to put Gusteau's back on the map.

“Anyone can cook ... but only the fearless can be great!”

Of course, this quick resume makes Ratatouille sound about as exciting as stirring salad. But, once you encounter Ian Holm's snivelling, beady-eyed and midget-sized Head Chef Skinner - a devious little short-order cook (literally, if not figuratively) with designs upon the former Gusteau's high profile empire, and his bizarre coterie of pot-bubblers and sauce-mixers - hats off to the Walter Mitty-type man of mystery Horst, who looks like the comedian Hugh Dennis (I use the term comedian loosely there, folks) and his alarming claims for violent notoriety (“I killed a man ... with this thumb!”) - the film introduces the familiar elements of villainy, subterfuge, confidence and trust gained, a race against time or two and moral redemption until, ultimately, you have the perfect recipe for a wonderful slice of life-affirming entertainment ... all served up with relish and a side order of purest, most delectable thematic finesse. By now, this seems like the type of thing that Pixar can do in their sleep - and, indeed, the film is a veritable dreamy delight of such luxurious visuals that your eyes may feel as though they have been dipped in syrup and your sensibilities transported, much like Peter O'Toole's starched and indomitable food critic Anton Ego's taste buds, back to a time that is younger, more innocent and more prepared to simply sit back and wonder.

“You're a bit slow for someone in the fast lane.”

“And... you're a bit thin for someone who likes food!”

The animation, as you would expect is of such a high and imaginative calibre that you could spend a month of Sundays poring over the image and still finding something new and innovative each time. The stark and iconic gleam of “The Incredibles” is shunted away in favour of lush reds, purples and oranges, the burnished glow of the kitchen and its reflective copperware. When the gas is lit in Ratatouille, you can feel the soft warmth emanating from the screen. Misty Parisian twilight is wonderfully evoked with an almost noirish style that recalls the mystery movies set during the War, the brightness of the daylight and the cobbled streets, the colourful store-fronts and the landmarks equally inviting and authentic - albeit in that unique heightened reality of the animated world. Gone also is the impersonal chrome gleam of “Cars”, the use of animals and people this time out lending the greater detail that the previous offering contained a much more cosy, welcoming and intimate aesthetic. The copious fast action is also a new benchmark for hyper-active, million-moves-a-second, frame-filling CG dexterity with numerous heart-in-the-mouth set-pieces that pepper the main course like little explosions inside the otherwise smooth and measured ease with which the film travels. The river-cum-sewer spectacle near the start kicks things off in a wildly strenuous and exciting manner and numerous whiz-bang cooking episodes produce the type of smirk-inducing adrenaline that Ready, Steady, Cook couldn't hope to match even if a suicide-bomber had just run onto the set. Relatively commonplace things such as riding a bicycle, sharpening a carving knife or even peering through the window in the kitchen door have a range of physical movement that goes even beyond the groundbreaking work done with “The Incredibles”. The characters, man or rodent, aren't real, but their minute actions and exertions are still captivatingly genuine, just the same. Check out Linguini's struggle to get his bicycle through the door of his apartment to see what I mean about even the simplest and most mundane of physicality benefiting from such close and authentic attention to detail. But the film marks a departure from the norm in that the pacing is utterly anchored to the characters and their development, rather than feeling the need to pep things up every five minutes with some madcap or zany interlude. There simply isn't any room in this brimming cooking pot to pitch in any unnecessary action or extraneous shtick just for the sake of it. Bird's story is effortlessly involving and ladled with nuance, something that he is especially adroit at effecting in his cartoon milieus. Even without the subplot about Skinner's nefarious back-stabbing and double-dealing, Ratatouille would get by on the simple exchanges and relationships between Rat and Boy, Boy and Girl - Janeane Garofalo's cutesy cook Colette - and the build-up to the fateful arrival in the dining room of the much-feared Anton Ego, who comes across as an even more stuck-up and miserable clone of Will Self ... which is no bad thing, actually, in the grand scheme of things. “Surprise me,” he wonderfully sneers in anticipation of ruining the credibility of another establishment.

With typically excellent writing and another cracking score from Michael Giacchino, who also provided the music for “The Incredibles” and now mixes Gallic serenades with rousing action and whirling French bonhomie to great carousing effect, Ratatouille is that rare dish indeed. Bizarrely mismatched characters and a pitch that is as apt to inspire shudders from any self-respecting chef, or diner for that matter, Brad Bird's latest is perhaps mistaken as being an acquired taste rather than an engaging satisfy-all. Rest assured though, Ratatouille ticks off the necessary boxes in anybody's animated wish-list and then, just for the sake of it, adds another course on the menu just that it can tick those boxes off, as well. This is a thoroughly entertaining and heart-warming fable that truly benefits from its fantastic setting, chic dressing and rich flavour. The cast are electric and the plot special in that it combines big scale ambitions with small yet profound impact. When I saw this at the cinema I didn't want it to end ... and now on Blu-ray it is the perfect accompaniment to any night in.

I have no doubt that Rataouille, like a fine wine, can only improve with age. And I, for one, can see myself indulging in its leisurely charm frequently ... and probably more often when the kids aren't around.

Exquisite. My complements to the chef!