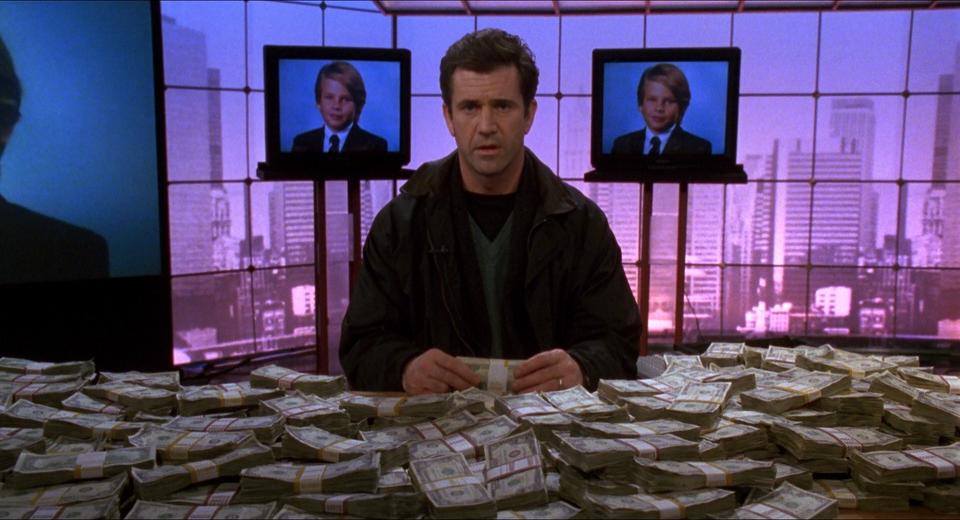 Ransom comes to Region Free US Blu-ray complete with a 1080p High Definition video presentation that isn’t really what you would have hoped for with a “15th Anniversary Edition”. It’s not a bad video rendition, just far from a noteworthy one, ranking in as decent-to-good, as some parts are very impressive, whilst others are downright shoddy. Fine object detail can be sharp and keenly observed in some scenes, where others take on the kind of softness that only goes hand-in-hand with excessive DNR usage. Some faces look smoother than they should, and edge enhancement is apparent in too many scenes to miss it. The colour scheme is fairly bright and vivid, particularly effectively juxtaposed with the black and white shots where red is the only ‘colour’ added into the mix. Black levels are reasonably solid, but lower-lit scenes do suffer more than the brighter daylight sequences, which arguably are the most HD-friendly. The noise level is variable, and the grain structure appears to have been tinkered with somewhat since the undeniably poor DVD release from a few years’ back, and not necessarily for the better. Still, there’s no question that this is a clear upgrade, on many levels, and that it seldom offers up anything distracting enough to pull you out of the film. It’s mainly worth criticising because it doesn’t even come close to deserving any kind of “15th Anniversary Edition” tag or the like – suggesting that it might have had a makeover – when clearly this is just another ‘bag-and-tag’ release that really hasn’t been shown enough love and attention. On the aural front the accompanying DTS-HD Master Audio 5.1 track is more impressive – still not the reference quality mix that you would have hoped would accompany the milestone release of the film, but very good nonetheless. Dialogue comes across with excellent separation on the different channels, generally clear and coherent, and, of course, dominating the frontal array where appropriate. Effects are well-balanced and keenly observed, although perhaps not quite as well separated, seldom utilising the rears to full effect. There is some nice police radio chatter, press hubbub, street traffic noises, and even overhead helicopters, which all contribute towards crafting a fairly decent ambient atmosphere. Stronger moments come with the tail-end gunshots, even if they rely less on precision and more on punch, and the LFE channel comes into play wherever appropriate. The most dated element – the score – allows for yet further surround accompaniment and LFE interaction, and overall this is a solid, occasionally rousing, and generally fairly impressive track. Again, for a 15th Anniversary Edition, this release does nothing more than include what was available on the earlier DVD releases, and, in fact, makes the big mistake of not including the Extended Cut (even via seamless branching) which hasn’t seen a release since the days of Laserdisc. Further compounding the mistake, we don’t even get the extra footage (which was about 30 minutes of extended scenes) included here in the deleted scenes, which, whilst purporting to be “extensive”, are anything but – again being nothing more than what accompanied the DVD.

A fairly lightweight offering, Howard discusses the themes of the movie, the stylistic choices, and the production shoot – with even a few anecdotes – but leaves a few too many pauses and silences where he appears to be busy watching his own creation. This is the same track as was present on the DVD and, if you never got around to listening to it back then, you weren’t really missing anything. For die-hard fans only.

I suspect that there might have once been intentions to actually provide ‘extensive’ deleted scenes, hence why they were labelled as such here, but the reality is that this is just the same 4 minutes of extra moments which we saw on DVD, focussing mainly on Delroy Lindo’s FBI agent, and his further involvement with the Mullen family.

Captivating Behind-The-Scenes Special With Cast and Filmmakers – Between Takes

Again, there appears to have been a miscommunication between the guy who wrote up the back-cover label, and the people who actually put together the material to go in the extras section, because this ‘Captivating’ Featurette is also just 4 minutes long and offers some inconsequential behind-the-scenes footage with the director fooling around with some of the lead cast members.

“What Would You Do?” – Featurette with Cast & Crew

Slightly longer and more substantial, this Featurette blends the usual cast and crew interview snippets with a look behind the making of the movie, proving to be reasonably engaging, even if there are a few too many final film clips to pad it out.

The disc is rounded off by the International Theatrical Trailer. Kick-starting my 6-movie Mel Gibson review series we take a look at one of his biggest hits, during the 90s commercial peak of his career, well after he had made a name for himself with the Lethal Weapon and Mad Max franchises. Off the back of his critical success with Braveheart, he teamed up with acclaimed director Ron Howard (himself riding high after 1995’s Apollo 13) to craft an efficient and compelling kidnapping thriller that arguably defines the sub-genre. With a solid story that cleverly borrows from earlier classics, and several remarkably effective twists, even 16 years on the film remains a taut, exciting ride, grounded by Gibson’s impassioned central performance. It’s a keen reminder of just what the man was (and still is) capable of.

On Region Free US Blu-ray we get a fairly average package – disappointing considering its “15th Anniversary Edition” (mis)labelling – which boasts DNR-tinged video, eminently more reliable audio, but a lacklustre set of extras that just ports over what was previously available on earlier DVD releases (failing to include the Laserdisc’s Director’s Cut, or even the extra scenes from that version of the film). Fans will still want to pick it up, particularly since it’s fairly good value, and those who haven’t seen it in a while should definitely consider revisiting this efficient thriller.