Superficial, brief, and yet still monotonous 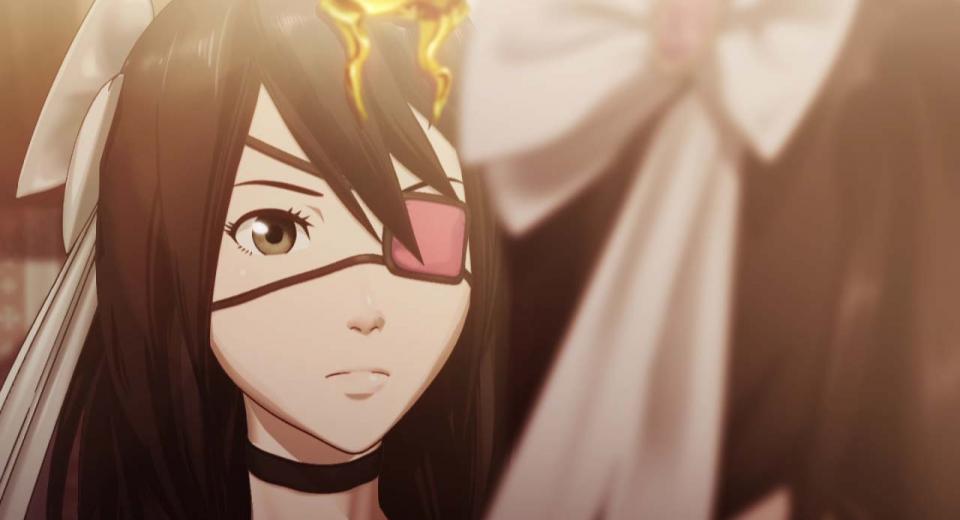 Short just about sums up all aspects of this Anime platformer from sometime-respected video game auteur Suda 51, given it clocks in at roughly an hour’s worth of play time. That was probably the intention though. His game takes its place on the Blu-ray disc alongside four small animation projects from respected Anime directors such as Shuhei Morita and the evergreen Katsuhiro Otomo, the lack of overriding theme turning Short Peace into a bizarre amalgamation of bright-burning ideas and vanity projects. Unfortunately, like so much of his post-Killer7 work, Suda 51’s contribution falls a little too far into the latter camp. It tells the story of seemingly ordinary schoolgirl Ranko Tsukigime and her partner-in-crime best friend, veering madly between art and gameplay styles as it spasms its way through a semi-incoherent sequence of events. There might be a plot in there somewhere, but I’ll be damned if I can read between the crash-zooms, pyrotechnics and quivering teenage faces to figure out if it actually means anything at all.


Her weapon of choice is a sniper rifle that fires bullets when played like a violin.

Ranko is a schoolgirl. She has an eye patch. She’s also an assassin, and her weapon of choice is a sniper rifle that fires bullets when played like a violin. She might need to kill her father to avenge the death of her mother, but those details get a little sketchy after the opening few sequences that depict her post-school life as a series of demon-slaying jaunts through shipping containers, quipping away with her best friend and best friend’s brother, running away from a giant scenery-chewing pomeranian, people with three eyes, and taking part in events that may or may not be part of a cycle that repeats for all eternity.

Those are the intelligible bits.

Whether or not there’s some grander purpose to the visual metaphor and occasional dips into outright lechery, the playable sections of Ranko Tsukigime essentially boil down to a series of runner-style levels interspersed with cutscenes and a few brief boss battles that dally with both shooters and arena-based brawlers. Ranko runs from left-to-right for the most part, with a limited set of interactions that cover jumping, sliding, swiping at enemies and a fire button that briefly clears away the swarm of beastly tentacles that constantly chase her across the level.

Although nowhere near the pure mechanical bliss of a Canabalt or a Rayman Jungle Run, there’s an occasionally satisfying rhythm to be found when hitting top speed in Ranko, while every successful attack unleashes a burst of colour and music that indicates your multiplier is safe and you should probably keep doing exactly what you’re doing; so long as you can see past the cacophony of neon swirls, screen tearing and choppy framerate. Tap to jump, tap to attack, build up special meter, repeat for two minutes until clear. Fin. To complicate matters a little for a full console release, Grasshopper has layered in a few token systems that unfortunately only serve to dilute the sense of flow. Ranko will slow down when hit by an enemy rather than instantly fail or continue for a set number of hits, while every successful attack gradually fills up a special meter that affords the use of those seemingly-important screen-clearing bullets. There's rarely any need to use them however, and while there are several different routes through each level it’s entirely possible to make your way to the end of each stage no matter which option you choose.

Every run is timed for local high-score purposes , so dedicated players on the same console might find limited replay value in shaving extra seconds off the clock or picking up the concept art markers littered around each level, but for the rest of us, Ranko’s journey is over practically before it’s even begun. It’s incredibly short, and even within that timeframe of around an hour (including cut-scenes), it somehow manages to become pretty darned monotonous even with the above mechanics layered on top of a standard runner template. Basic movement and interaction just isn't satisfying enough on the standard levels, and although the boss battles, shooter and brawler sequences offer a dose of variation and invention, it’s not enough to save Ranko from being spectacularly underwhelming.

Although I’m loathe to bring up the concept of monetary value and brevity when it comes to games nowadays, Ranko Tsukigime’s Longest Day is one of the rare occasions in which it seems prudent to do so. It’s not the length that leaves a bad taste in the mouth, but rather the lack of consistent quality gameplay or any kind of coherent storyline to go along with the sumptuous madhouse hotchpotch of visual styles.

Video games can be super-short and still as utterly compelling and whole as any 40-hour RPG. This, despite its title, is just short. You do, of course, get four beautiful and occasionally moving Anime films to go along with that disappointing Suda 51 project, but as a review of a PlayStation 3 game first and foremost, there’s little that can save Ranko Tsukigime from being a brief and incredibly expensive flash in the pan. Be wary of purchasing at full price.