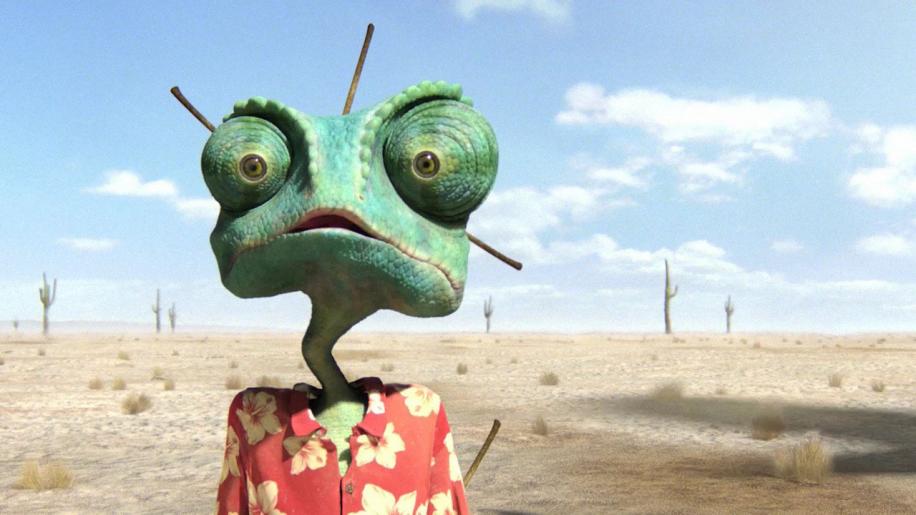 When I picked up ‘Rango’, I initially thought it was just another kiddie’s animation that would no doubt be full of fluffy characters running about shouting and screaming. I thought that if I was really lucky there might even be a half decent song involved, somewhere along the timeline. I’d spotted that Johnny Depp was supplying one of the character voices, so that immediately raised it above the usual low budget affair where you don’t recognize any of the voice talent. Things got even better when I saw the names of Isla Fisher, Ned Beatty, Bill Nighy and Ray Winstone attached to the project. Hmmm, this had promise. Still, it was probably just full of pooping gags to gladden the hearts of school children everywhere. ‘Rango’ simply shows how wrong you can be.

Out now on UK Region free Blu-ray courtesy of Paramount, ‘Rango’ is the first CGI animated feature produced by ILM (Industrial Light & Magic), a name we’d normally associate with high end Special Effects for Hollywood blockbuster movies. Furthermore, it’s directed by Gore Verbinski, famous for taking the helm of the ‘Pirates of the Caribbean’ movies – hence the connection with Mr Depp. As you can see, this film has quite an interesting pedigree and the chances are that the ‘new kids on the animation block’ will want to do something a bit different from Disney/Pixar. They certainly do.

Think of every Western movie that has impressed you, from ‘Once Upon a Time in the West’ to ‘High Noon’ to ‘True Grit’ and you’ll recognize similar scenes in the animated ‘Rango’. Not only are there similarities in terms of the script, individual shots have been studied and replicated with respect to camera angle and lighting. There are so many references made to classic Westerns that it’s almost a test of a viewer’s knowledge in the said genre. There’s even an appearance by ‘The Man with No Name’ who represents the Spirit of the West. Much of this will be lost on any children in the audience as will a lot of the humour as it is more adult orientated and I was surprised at the amount of swearing (relatively mild) that was delivered in a rather harsh manner by some of the characters. It was around about this point that I felt that the film wasn’t so much made for kids as for the child that lives within every adult.

Our hero is a nameless Hawaiian shirt wearing lizard, voiced by Johnny Depp, who relieves the boredom of life in an aquarium by using his over active imagination to act out scenes with other, mostly plastic, inmates. This provides the talented Mr Depp with a platform to display some of his improvisational acting skills. You may find this a strange thing to say about someone who is only ‘voicing’ a character, but the actors were actually filmed giving a performance, so that the animators could replicate some of their movements on screen. This adds a certain authenticity and fluidity to the animated characters.

Through a sudden change of circumstances, Rango is set free and eventually comes across an old Western style town called Dirt, so named because of the lack of water and preponderance of – you guessed it- dirt. He bumps into a female lizard called Beans (Isla Fisher) who has a funny habit of suddenly freezing, which we learn is a defence reaction. So Beans is trying to save her family ranch but our hero reckons this to be part of some greater conspiracy and the trail leads to the Town’s sinister Mayor (Ned Beatty). Ray Winstone is the voice of one of his henchmen but the real troubles begin when the Mayor pulls in Rattlesnake Jake (Bill Nighy) complete with his Gatling gun tail to rub out his problems.

One of the most fun things for me was the appearance of the Mariachi band at various points as they help move the story along, in much the same way as Stubby Kaye and Nat King Cole did as the strolling minstrels in ‘Cat Ballou’. Throughout the film, no Western cliché is left unturned and that is where a great deal of the entertainment comes from.

The music score is courtesy of Hans Zimmer and it’s fairly eclectic, combining some classical numbers with music from the 1940’s onwards. Who would have thought that the good townsfolk of Dirt would break into a line dancing routine to the strains of the old Frankie Laine classic ‘Water’? The title song ‘Rango’ wouldn’t be out of place on a live action cowboy movie. The use of the ‘Ride of the Valkyrie’ over a battle sequence where the bad guys mounted on flying bats chase the good guys is quite amusing, perhaps taking a swipe at the attack on the Death Star from ‘Star Wars’ or even the pod race in a more recent Star Wars prequel where Anakin hangs on by the skin of his teeth.

‘Rango’ has a lot going for it in the ‘homage’ stakes but I found that a certain magic spark was missing that would have made this good movie truly great. Could it be, perhaps, that the characters lacked the visual appeal that we’re used to in animated films? Instead of fluffy, cuddly characters what we have here are slimy, scaly reptiles that many people find rather repulsive and are reluctant to go near in real life.

I knew that I was watching something really clever into which a whole army of people had invested an awful lot of time, care and money. The movie also looked fantastic in terms of its sheer picture quality with surround sound to match. I really wanted it to deliver the same sense of overall satisfaction that I’d felt with a ‘Toy Story’ or ‘Cars’. The more I think about it, the more I come to the conclusion that it was the missing ‘Aaaah!’ factor that was the difference. For all we might not want something syrupy and sweet in our modern, cynical world – maybe there is a place for it in an animated film and for the warmth that comes from something that can be shared with the whole family.

‘Rango’ is a film that really warrants more than one screening if you’re going to pick up on all the nods to well known Western movies and perhaps, second time round, I’ll have warmed to the characters a little more. All the same, for fans of John Wayne, Clint Eastwood, Gary Cooper et al – rounding up ‘Rango’ is a no brainer.

Get outta town before sunset and see it.