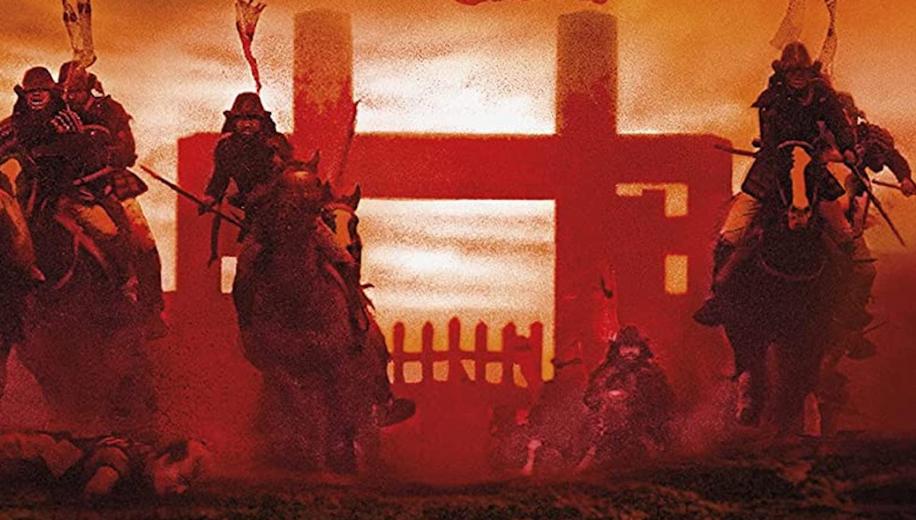 The last true epic of one of cinema’s greats, Akira Kurosawa’s reimagining of The Bard’s King Lear, is a beautiful, elegant but slightly unevenly paced tale of opposites...

At once huge in scope – the number of extras on screen during the battle screens are countless, the huge castle set built expressly for the purposes of burning it down during one of the film’s beautiful battle scenes, etc – and yet intimate in its very human themes of age and regret, power and corruption, revenge and forgiveness. The tale of an aging warlord who realises the time has come to relinquish his empire to his sons, only to have his plans dashed as the sons turn on both him and each other, Kurosawa mixes the lyrical classicism of Shakespeare’s tale with a supposed autobiographical element, looking back over his long and varied career.

Yet its overall style is again about the ‘opposite’, being both overtly cinematic and theatrical all at once – while the battle scenes pack the frame with monstrous sets and hundreds of people, all decked out in stunningly coloured and visually opulent costumes, the human drama is almost always shot in medium or long shots, eschewing any close ups and keeping the audience always at a distance. Coupled with the almost Noh-style of acting (traditional Japanese, hugely stylised representation of human emotions, etc) from several of its leads and a deliberateness and stillness to much of the characters’ discussion and interaction, it’s a haunting mixture of styles that perfectly captures those themes against the epic backdrop Kurosawa was using.

A rich meditation on the human condition writ large against the biggest backdrop, it’s a beautiful and melancholic epic

The mid-film castle raid is a spectacle of cinema, not just in its size and scale, but in its bloody violence and its haunting use of the film’s score only to soundtrack the action. Yet here’s where the film’s pacing took a hit – where to go after such a visceral setpiece, the film drops back into its more measured Machiavellian plotting for the next act and its quiet conversations and political manoeuvring leave the audience in somewhat of a lull. And even at its finale, the final battle scene just can’t compete with the midway castle raid either, meaning the second half of the film feels slightly less satisfying in comparison.

However, that shouldn’t take too much away from this sprawling tale of familial intrigue. Visually dazzling and thematically rich, it deserves to be seen on as large a screen as possible.

Ran was shot on 35mm film using Panavision Cameras and utilises the full 4K restoration from 2016 which produced a 4K DI from which it appears this UHD is sourced.

The native 4K image looks a little soft compared to similar releases from that period, due in part to a combination of shooting style and film/lenses used. The lack of closeups means we’re robbed of the usual fine detail showcases of skin and clothing textures. However, for a significant number of those medium shots – Hidetora in a wicker hat at the 1:39:55 mark for example - some decent fine detail is present. However, it should be noted that this is inherent to the filmmaker's intent and nothing to do with the transfer. Grain is fine and no digital issues with either it or the disc’s compression, which Studiocanal has had problems with on previous releases, were noticed.

The colour palette and the use of HDR10/Dolby Vision and the WCG to showcase it retains the same slightly teal caste that the previous 2016 release had, readily apparent over the distance shots of the forest in the film’s opening. This doesn’t pervade all areas of the image – skin tones make heavy use of make up so naturalistic colours were difficult to ascertain anyway – and isn’t anywhere near the levels of ubiquity of James Cameron’s remasters, but it is noticeable in certain shots. Overall, it’s also not a particularly bright or rich image colour-wise either – dark sombre skies and landscapes offset the wonderful colours of the clothes and the whole image appears very toned down and almost gloomy.....but again, more by design than any issues with the transfer. Here, the Dolby Vision layer gives colours slightly more richness than the HDR10 layer – but it’s not readily apparent unless side by siding the two images.

The only real issue is the slight lack of depth to the image’s blacks – never quite as inky and deep as you’d like, its more dark grey overall, slightly reducing the overall contrast ratio of the whole image and robbing it of that last little bit of depth. The Dolby Vision layer again helps here, giving a touch more darkness to the blacks, but there’s not a lot in it. It’s not a deal breaker regarding the overall image quality, but it's noticeable. In summary, this is a very textured, filmic, and natural image that holds up well even on bigger screens.

However, comparing this to the previous Blu-ray release from back in 2016, shows that there is very little increase in detail or any significant changes to the colour palette on this new 4K disc. The slightly darker image that the DV pass now gives it helps somewhat with the not-perfect blacks, but it doesn’t fully fix them. And therefore, as both releases are based on the same 4K restoration, with no material changes appearing to be made for this release it’s not surprising that any gain over that release is not significant and how much of an upgrade this represents is not wholly clear cut.

With no aural upgrade in the form of a 3D audio track, the film utilises the same array of soundtrack options as the previous 2016 release did – lossless Japanese, English and French 5.1, with lossless 2.0 options also available in Japanese and German – as well as the usual vast array of European Studiocanal subtitle options.

Watching Kurosawa in anything other than the native Japanese just feels wrong, so heading over to that, it’s a track that presents what it is being asked to perfectly well. The dialogue is always crystal clear and rooted to the centre speaker, with no crackle or hiss underpinning it at all. The music, and there’s surprisingly little of it across the 160 min runtime, has weight and power thanks to its percussive nature, together with a richness of timbre and a lovely wide range of dynamics. It’s a very front focussed track though, with very little other than atmospheric use of the surround speakers for the musical score.

The subtitles had no obvious errors and the timing to the dialogue seemed spot on, so all is well here. Although yet again, it’s the same set of soundtracks that had graced previous releases, so again, the worthiness of the upgrade is called into question.

We listened to the UK Ultra HD Blu-ray release of Ran on a Denon AVR-X4300 and a full 7.2.4 speaker set up made up of Kef speakers (Q series and Ci in-walls/overheads).

The worthiness of an upgrade is again called into question when all of the extras are all rolled over from the previous release, with no new features added.

The worthiness of an upgrade is again called into question

It should be noted that the accompanying Blu-ray and extras disc (and the standalone regular 1080p two-disc release) are the exact same discs as the 2016 release, even down to the same menus being used.

A rich meditation on the human condition writ large against the biggest backdrop, it’s a beautiful and melancholic epic. Its slight pacing issues aside in its second half (only due to the film’s central setpiece being so wonderful), this is a wonderfully visual and thematic film, one that befits its place in the filmography of one of cinema’s greats.

... it’s still the best version of this classic film to own

This new 4K disc gives the film a nicely textured and organic presentation, free from any form of unwarranted tinkering whatsoever. However, being based on the same master as the previous 2016 release, and porting over the same soundtrack and extras, means that for those who already own that release, this upgrade may only be slight. For everyone else, it’s still the best version of this classic film to own.

Ran is released by Studiocanal in the UK on Blu-ray™ and 4k UHD Blu-ray on the 19th July.