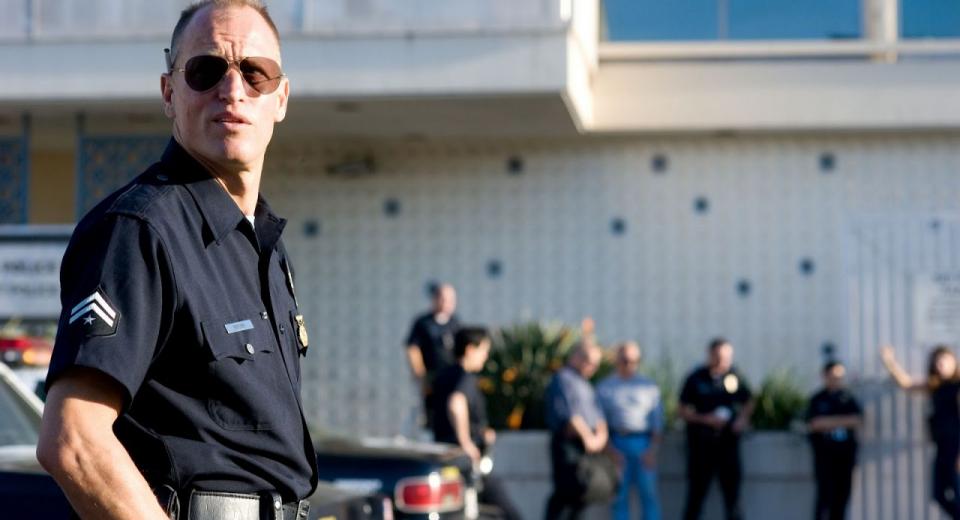 However tough to enjoy the movie is, the video presentation is consistently impressive, and easily demo quality, coming to Region B-locked UK Blu-ray complete with stunning 1080p/AVC High Definition in the movie’s original aspect ratio of 2.35:1 widescreen. Detail is often remarkable, showcasing every single line and pore on the characters’ faces, and flesh tones are often so accurately rendered that you can see the faces flush with blood to the head, pasty from alcohol, or sweating in the battering sun. Environmental observation is also very good, with strong textures and clothing weaves and just an excellent look at the wear-and-tear of beating the street. There’s no sign of any edge enhancement, nor any over-use of DNR, but, conversely, the grain – or noise – level is not always consistent, venturing into distracting territory particularly during the darker sequences. The colour scheme is brilliant and broad, and well represented throughout, showcasing some gorgeous tones as well as some deep and vivid elements. Aside from the noise, it’s a near-flawless digital-shot production, which is sure to please fans of the film. On the aural front this UK Region B-locked release gets a DTS-HD Master Audio 5.1 track which is just as impressive as the US counterpart’s Dolby TrueHD 5.1 offering. Dialogue comes across clearly and coherently throughout, largely emanating from the frontal array, and dominating wherever appropriate. Effects are mostly incidental – with only a few boisterous moments of screeching tyres, deafening gunshots and smashing car crashes – but this makes for an engaging soundstage which is atmospherically vibrant, drawing you in as you are taken through the various LA locations: from the police station to the seedy sex clubs, from the cop’s double-residence to the girlfriend’s modern flat, with all the corresponding ambient touches brought in to add several welcome layers of authenticity. The score, and the music tracks, all further enhance the track – and thus the feature – and allow for a little LFE input which further gives this mix a welcome depth. Although not a boisterous piece of outright bombast, this well-observed piece is another impressive, reference quality accompaniment. The US release of Rampart came complete with an Audio Commentary with the Director and the Cinematographer, as well as a half-hour Making-of Featurette. Unfortunately for the UK release we lose the Commentary, in its place getting a selection of Cast and Crew Interviews and some Trailers. Still, the 30 minute Making Of does go into a fair amount of detail on the production, offering up behind the scenes footage of the film being shot, as well as snippets from the makers peppered throughout; and the Interviews further expand on this by allowing the cast and crew to explore the subject matter, the characters, the performances and their overall impression of the movie. It's certainly not overwhelming, but at least it's not bare bones. Woody Harrelson is not just the best thing about Rampart, but also pretty-much the only reason to watch it; the reason why you’ll stay glued to the screen through thick and thin over the course of this feature. The reality is that the painfully odd directorial style, the redundantly familiar and unavoidably clichéd plot, and the surprisingly out-of-place background characters all conspire to make this a fairly unpleasant and eminently pointless little movie, but for its standout lead performance.

On Region B-locked UK Blu-ray we get excellent, demo-quality video and audio, as well as a couple of extras (technically matching up to the US counterpart in all but the Commentary track). Fans of the film should consider this a solid release. Otherwise, if it takes your interest, then it’s probably worth a look just for Harrelson.