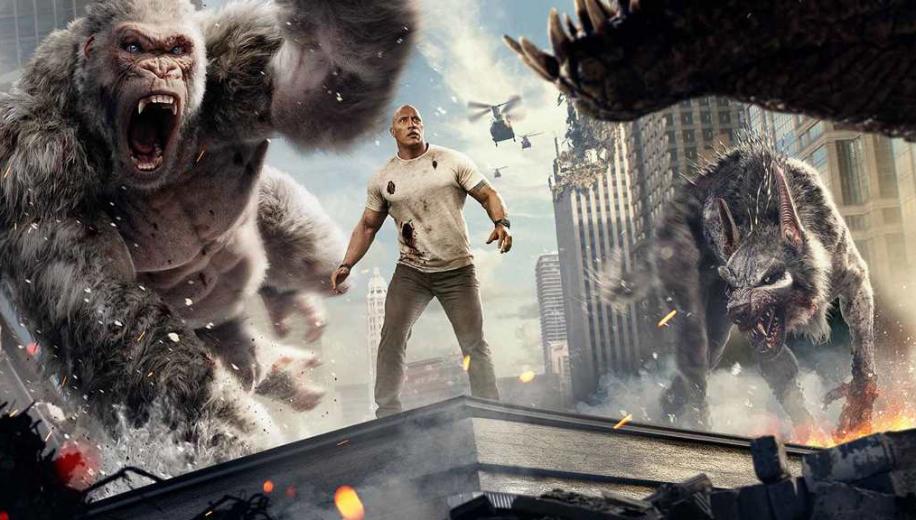 Is it me, or is he considerably bigger?

What do you expect with a film like, Rampage? Well, you get exactly that, total mayhem! Dwayne Johnson plays Davis Okoye, an ex-special forces (of course!) primatologist who has a special bond with an albino gorilla named George. When a genetic altering canister crash-lands from an exploding space-station, George (along with a wolf and a crocodile) become infected, grow to enormous size, become nearly indestructible and have heightened aggression – then make their way towards Chicago hell bent on causing as much destruction as possible.

Sounds outlandish? Well of course it is, and that summary is the whole film; yes there is a clandestine, seedy corporation, headed up by sexy money-grabbing woman, complete with comedy side-kick brother, an army colonel hopelessly out of his depth with regard to the creatures, a government agent who switches sides to help the good cause and a love interest (and scientist whose expertise helped in the monsters creation), but all play second fiddle to the main thrust of the film – getting to the destruction.

The film is utterly frivolous and totally forgettable; characters are one dimensional and clichéd, dialogue is corny, even the idea is idiotic – and yet, director, Brad Peyton, keeps the film on the straight and narrow, gradually building the tension, despite the ham and cheese, to a satisfying conclusion. The action set pieces are wonderfully over-the-top – physics be dammed – but nevertheless eminently enjoyable, CGI laden effects extravaganzas. The film manages skirt the groan inducing hatefulness associated with something like the Transformers franchise, and even tugs at the heart strings late in the day with some consequence to the devastation and a King Kong-esk devotion. A classic example of style over substance that just keeps on track. Rampage was shot digitally using a combination of Arri Alexa 65, Mini and SXT cameras with resolutions of 3.4K and 6.5K but ultimately finished as a 2K DI, which has presumably been used here for this Ultra HD Blu-ray release. The disc presents an up-scaled 3840 x 2160p resolution image in the widescreen 2.4:1 aspect ratio, and uses 10-bit video depth, a Wider Colour Gamut (WCG), High Dynamic Range, and is encoded using the HEVC (H.265) codec for both Dolby Vision and HDR10. We reviewed the Region free UK Ultra HD Blu-ray release of Rampage on a Panasonic 65DX902B Ultra HD 4K TV with a Panasonic DMP-UB400 Ultra HD Blu-ray player.

Despite being limited by the 2K DI the image on shows a clear up-turn in detail, from skin texture to clothing weaves, from (distinctly fake) rock surfaces to forestry, from computer monitors to city-scape buildings – all have a keener edge, giving rise to a sharper picture compared to the 1080 Blu-ray. When you factor in the WCG and HDR the image simply pops in comparison. Colours are not significantly more radiant, primaries are strong and show a greater depth, but the overall quality is that of a far more natural feel; thus skies fade better, greens are lusher, flesh tones are natural.


A sharper picture compared to the 1080 Blu-ray.

Blacks contain more detail, this adds to the depth of frame, while the white end is far cleaner and gives that pop mentioned earlier. George’s fur, or the sweat on The Rock’s head, is more defined; indeed all highlights show a vast improvement (thinking of skies, explosions, any white detail), especially in the space station and its destruction; check out the debris against the stars! Digitally there are no issues, while the source is clean, bright and sharp. The English Dolby Atmos track is full on! Right from the off in the space station with all the devastation occurring, as the astronaut floats along and through the destruction, so too does the sound follow, and all the while there is that subterranean throbbing from the sub. Wonderful stuff. And, of course, being an action film there are plenty of set pieces to show off the system; George escaping the aircraft, with effects everywhere, the destruction of Chicago, the climactic stand off – all these are awash with effects, pinpointed all around and above.

Talking of the aircraft, quieter scenes also benefit from the immersivity – the engine noise is outside, when we follow the parachute the sound follows out of the stricken aircraft and the wind noise rushed from floor to ceiling. Quieter moments, such as in the jungle, or the army command centre still contain plenty of surround ambient action to keep the immersion up. Dialogue remains clear and focused, though, sounds very natural and is given plenty of directionality when required. Bass, as alluded to, is tremendous, pounding LF effects enforce the action and unsettle the furniture – any of the set pieces will set the sub alight. The score is also well layered into the mix. Bombastic stuff. Note: be sure to select it from the menu, the disc default is DTS-HD MA 5.1. There are no extras on the UHD, all are found on the (included) Blu-ray.

Not Just a Game Anymore – 6 minute feature where cast and crew reminisce about the classic game that inspired the film.
Trio of Destruction – 10 minute feature that looks at the monsters of the film, packs a fair amount into it from design and CG wizardry to realism and interactions.
Rampage: Actors in Action – Another 10 minute feature that does for the actors that the above feature does for the CGI; we look at artwork, practical and digital sets, stunts, effects, actors on set, etc.; interviews set to film clips.
Gag Reel – 3 minutes of goofing off.
Deleted Scenes – 10 minutes of excised material.
Attack on Chicago – Yet another 10 minute feature, this time centring on the city, like the above covers decent ground from sets, to locations, CG and destruction.
Bringing George to Life – Breaking the mould at 11 minutes, this feature details the extensive motion capture, training and the performance needed to bring the creature to life. Rampage is frivolous, some might say fun, some might say tedious, but it is not hateful and is easy watching. Only loosely based on the classic arcade game of the same name, three impossibly large monsters destroy a city; throw in a seedy corporation, out of their depth army, likable lead, love interest and you have a nonsense film that never taxes your brain. But that is it, there is absolutely nothing more.

As a 4K UHD set, the package from Warner’s is pretty good; the picture, albeit from a 2K DI, is a decent step up from the Blu-ray, detail is improved, while HDR and WCG give further depth and purpose to the colours, black and white levels. The Dolby Atmos track is another winner; the immersive format takes the effects and runs, barely letting up to give an aural assault. The extras are a little short, however, but, at least, cover all the bases.