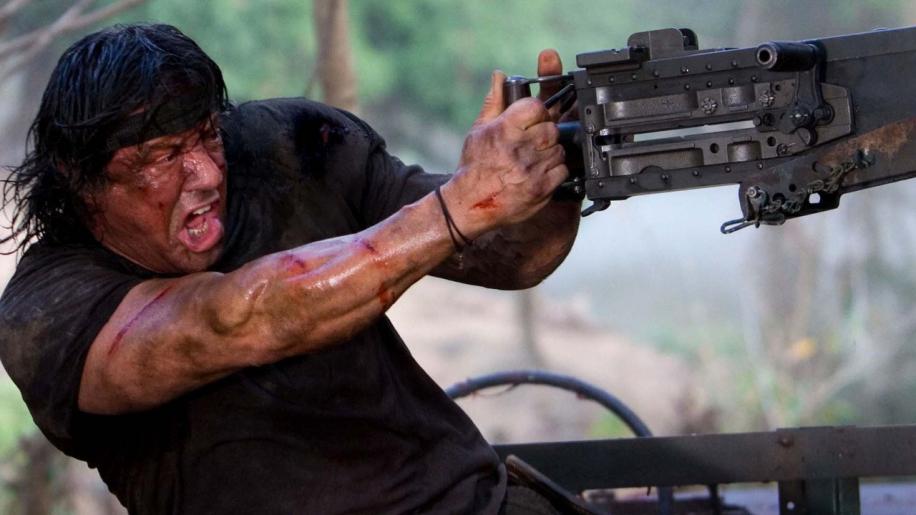 The first Rambo, First Blood, was a good enough attempt at showing some of the difficulties that a man riddled by the horrors of war had to face when he finally returns home. Obviously not as in depth as something like The Deer Hunter it was never the less a valiant attempt at bringing this idea the big screen and perhaps to a wider audience that others failed to reach. As it progressed though the Rambo franchise went rapidly downhill becoming nothing less than a jingoistic mouthpiece for the right wing American viewing public at the time. Ultimately the final two films left a rather sour taste in my mouth so it was interesting to see how Sly Stallone now in his twilight years would return to this most visceral of characters.

John Rambo has decided to withdraw from main stream society and he's camped out in Thailand living a quiet and peaceful life, eking out a living by supplying snakes to a local tourist side show organisation. It's not long though before a group of American missionaries approach him asking to take them up river, into Burma to supply medical aid, education and Christianity to the local Karen rebels. Rambo initially declines indicating that these people really don't know what they are getting into; due to the persuasions of Sarah (Julie Benz) she convinces him their goals are worthwhile.

He completes this initial mission and thinks no more of it until some time later the pastor of the group searches out Rambo telling him that these missionaries have not been heard of and could he guide a group of mercenaries back into Burma and spearhead a rescue mission. So it begins again, Rambo is forced back into his own personal war.

Although not following the same jingoistic lines that the previous two films had ventured down there's still something about this film that leaves a sour taste in my mouth and this has to be the ideology and extreme level of violence depicted. We're obviously informed on many occasions that war is the main stay of the world, something that makes it tick and really shouldn't be interfered with as nothing ultimately ever changes; now like anyone else out there I know of the continual conflicts going on in the world, however after 20 odd years I thought John Rambo himself from his previous history would have realised that conflicts are not the raison D'etre of mankind per se just the machinations of small minded people trying to gain or retain power. Obviously he still has some learning to do.

The violence in the film is something else though and goes way beyond anything else I have seen on film in some time. If you thought that the opening scenes in Saving Private Ryan were a little rough then please don't watch Rambo as it will turn your stomach. If violence has to be shown in a film, and it needs to in certain circumstances, then it has to be shown realistically; there is no doubt about that. There's no point in showing pantomime violence as loved by The A-Team where no matter how many explosions there are or how many bullets are let loose there seem to be no consequences, no one dies to the violence on show. Obviously violence does have its horrific consequences and here we do get to see it but does it in fact go a little too far? In my own opinion it does. It's a noble statement by Stallone in his commentaries saying he wanted to show to the world what it does actually mean to go into battle and what the Karen rebels are currently living with in Burma, however does that mean that Stallone himself had to show the killing of a pirate by ripping his chest out with a short range shot he then goes onto shoot him in the head? Why not you say he's just making sure that he's dead. Well if that was the case why then does Stallone then show in great brain mushing detail two further shots; surely one would have sufficed. And he must have this thing for heads because the number which are ripped off during battle has to be setting a new record here. Yes violence has to be shown for what it is, but no I don't think it needs to to this degree.

Characterisation is straight out of the early westerns, a straight cut between the good guys and the baddies. In the early days these baddies wore black hats whilst our heroes wore white. This has been updated though, the baddies chain smoking, the good guys never letting the evil weed touch their lips(well apart from one guy!). Characters are as one dimensional as they get, there's no reason to look into anyone's history as it's never needed in this rumbustious escapade. The Christian missionaries wear crosses and think that no life should never be taken no matter the cause, the Burmese are so evil they gamble with other peoples lives, Rambo... well he's just the same usual one man killing machine ripped from the second and third film. There is some aspect of his character which could have been explored a little more, why he retired to this part of the world, what is it about his own personal history that meant all he was waiting for was a chance to die for any cause? This might have been explored after First Blood, but after II and III this was never going to be the case but it could just have been Stallone's missed opportunity; never mind an ageing boxer coming back to fight one more time, if he had gone back to the premise of First Blood then he would have received a little more respect than he's getting here with what ultimately is just a means to further his personal pension.

The plot is unravelled within the first 10 minutes of the film, if no earlier, and you know what's going to happen and to whom; all we're watching for here though is to see how it happens and for those people who enjoy spectacle over form then there is some good actions scenes; the plot like the characters though needs more substance, needs a little more depth to become truly engaging. Who out there didn't realise though that as soon as one missionary says the words "killing is never justified" you know that before the day is out he'll do just exactly that to save his own skin. The thousand yard stare it isn't but you can see the plot coming from such a distance. Production values are high though, the location shoots and the villages which were continually reconstructed are impressive to view and that at least is something; the effects as people are torn apart, decomposing fly ridden bodies, villages burnt to the ground and the many actions scenes will keep some on the edge of their seat baying for more; and more they will usually get.

Throughout you can almost see the pain on John Rambo's face and this I feel should have been explored a little more. It is during an all too brief flash back and this is where the film really should have had it's centre; it's a missed opportunity of sorts. Stallone in one of the commentaries even asks the question “is this the last we have seen of John Rambo?” I'm happy to see more of him but only if it's a more introspective affair; if he does decide to fill those boots again then it has to be an insight into his tormented psyche, that in itself might be worth watching. At times watching people get torn apart for the sake of entertainment just makes me feel like a gladiatorial spectator and I know these atrocities are occurring in the real world so I'm prepared to just give Sly the benefit of the doubt for putting this on our screens.