"I want them to know that death is coming and there's nothing they can do to stop it." 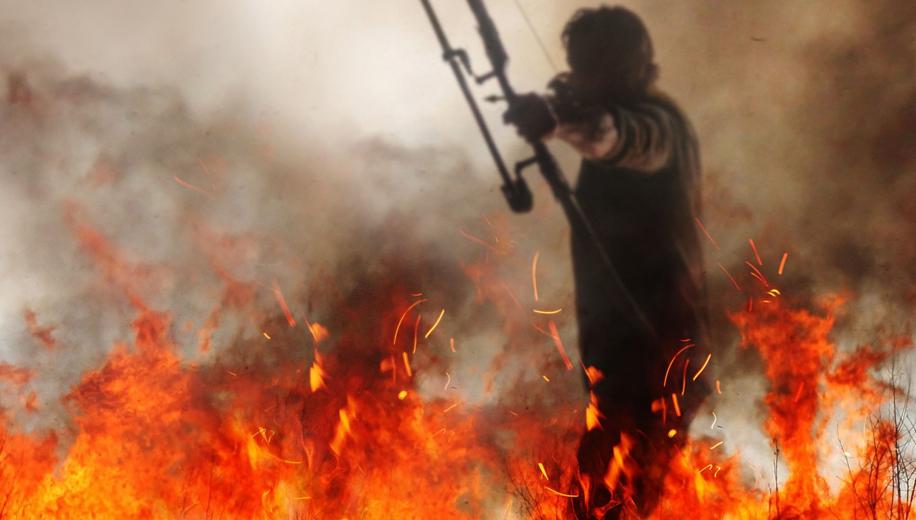 Lean and brutal, this may well be the weakest Rambo film but, at 73, the legend that is Stallone still deserves respect for literally destroying opponents half his age in this bloody take on Taken.

Nobody should be expecting a miracle here. Stallone's 73. In amazing shape, but still 73. And funding for the long-gestating decade-in-the-making project was clearly limited. So, much like the last one, where Stallone revealed that he actually used the over-the-top violence and gore to disguise some of the budget limitations, Last Blood eventually descends into utter carnage, hoping that this will be enough to satiate fans of the franchise who are looking for one last fix.

The result of doing this is something of a more jarring ride than the franchise high of 2008's Rambo, however, building with surprising elegance and beauty in its scenes on the family ranch (perhaps not wholly unlike the setup to the first and last of the previous films, which similarly book-ended the carnage) and establishing an older father-figure who is evidently protective of his young 'niece', but then losing its footing somewhat in the middle act, where scenes of rescue get complicated, and the path to a violent finale gets similarly muddied. It's still an efficient feature, never outstaying its welcome, and it could be argued that the middle act choices are at least moderately surprising (it may be compared to the Neeson franchise, but this story makes Taken look like Taken-lite), however, there's a little finesse missing, particularly when first blood is drawn.


There's something to be said for seeing his Rambo back in action, and Last Blood pushes a simple 6/10 score up a notch just on pure rage alone

Director Adrian Grunberg takes the helm this time out, and he's not a bad choice - particularly given the Mexico location - with experience handling one of Mel Gibson's best features since his exile, the distant Payback cousin, Get the Gringo (aka How I Spent My Summer Vacation), which worked on an even tighter budget to still deliver style and punch where it counts. Last Blood similarly captures a textured, seedy side to Mexico (or Bulgaria, dressed up surprisingly well), and affords Stallone some visceral brutality, finally bringing the character home for the first time in almost four decades, only to find himself in a very different kind of hell.

Of course, clearly compromises had to be made, with Last Blood noticeably shot on a budget (much more evidently than 2008's Rambo where Stallone, on strong directorial form, wisely made the most of the Thailand location to disguise any similar limitations; here even the in-car footage is jarringly terrible) and now limited a little bit by just what even the chiselled-out-of-solid-granite action icon can actually still do in his seventies. He's still the star of the show, though, as convincing training horses and working the ranch as he is laying claymore mines and hacking limbs off. And he really looks like he is made of pure steel, particularly when the finale takes him back to Killing Machine mode (stick around after the credits for an extra farewell). Fans should rightfully moderate expectations in respect of this being a worthy follow-up to 2008's Rambo but, with that said, Stallone still deserves his due for turning in such a committed, brutal and raw performance at his age. There's something to be said for seeing his Rambo back in action, and Last Blood just about pushes a simple 6/10 score up a notch just on pure rage alone.

Detail is very good indeed, picking up on the ageing lines across Stallone's increasingly weary and battle-damaged face, detailing bloody wounds, and textured environments, and affording strong clarity with little in the way of softness, although there are a few, scant, shots which appear a little noisier, perhaps courtesy of some digital grain layering which doesn't always hold up as well in night scenes or more vibrant sequences where Dolby Vision is working overtime.

Of course, that's almost worth the price, as HDR and WCG make all the difference here, as always, with Dolby Vision too to complete the trifecta, bringing some gorgeous blue-dominated shots, richer and more intense colour to the fires, and better colour depth even in the ostensibly restricted ranch setting (shadow detail in the tunnels is impressive). Black levels are strong and complete the package. It's not quite a reference native 4K Dolby Vision piece, but it comes pretty damn close.


Effects are what you really come here for
The accompanying Dolby Atmos track also does an excellent job with the material, giving priority to Brian Tyler's score (despite it being not a patch on the one used in 2008), which brings some sweeping atmosphere to the proceedings even with the action largely bookended to the finale. Dialogue too remains prominent where necessary, coming across clearly and coherently throughout, even with Stallone growling his way throughout. Effects are what you really come here for, splashing some intensity across the stage courtesy of some early flashbacks, and the initial voyage into enemy territory, but mostly leaving the real carnage for the final act, where the surrounds and LFE input go into overdrive as your living room is perforated by munitions and ultimately levelled.


The extras package a hefty feature-length Production Diary with Stallone, a Featurette on the score, and a trailer, all on the 4K disc itself - but where's the Alternate Opening?


Where the hell is that rainstorm rescue Alternate Opening that some territories mysteriously got on theatrical release?
Rambo: Last Blood sure feels like the final word on Rambo, undoing the perfect end of the surprisingly effective 2008 Rambo outing by allowing this decades-running franchise to descend into veritable Taken territory. Nonetheless, it's still great to see a 70-something Stallone breaking heads. Lionsgate's UK (and, for that matter, US) 4K release is as curious as its theatrical release - sure, there's impressive enough 4K Dolby enhanced video here and an even more impressive Atmos track, as well as more extras than you would expect (although Stallone is renowned for his comprehensive behind the scenes diaries) but where the hell is that 10 minute rainstorm rescue (pictured above) Alternate Opening that some territories mysteriously got on theatrical release? Surely they could have at least stuck it on as a Deleted Scene? If this is some half-baked idea for double-dipping with a longer cut later down the line then they shouldn't have already made it available in some countries; if not, it's just lazy not to have the sequence at least on home formats.