Violent and silly, that about sums it up! 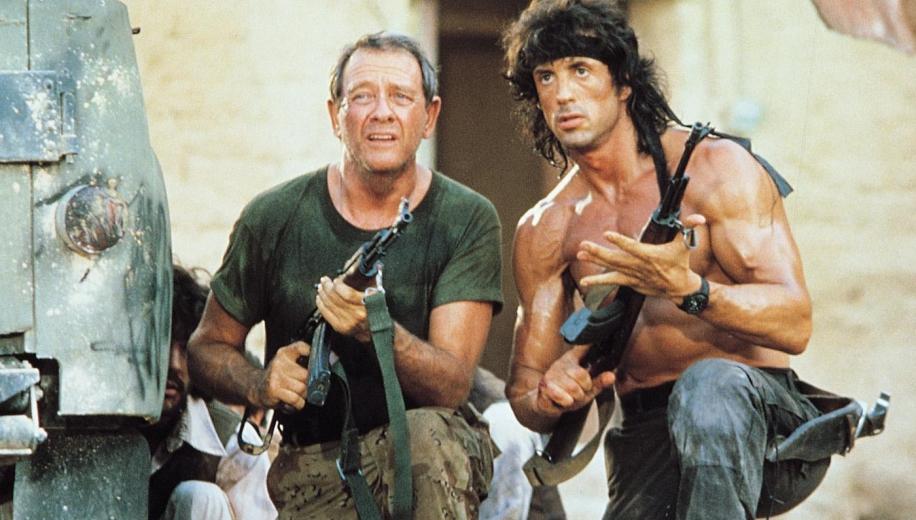 You're not with military, not mercenary - what you are? Lost tourist?

By the time the third film of this particular franchise came along, so well-known was the titular character, that Rambo III was all the title it needed. If the first film brought about the idea of an unstoppable hero and the second defined the genre, this third instalment was a fitting conclusion in which Rambo becomes war. It starts in Thailand, where our hero supplements his income from helping to rebuild damaged monasteries by doing what he does best: fighting. However, his country still needs him: in Russian occupied Afghanistan a small group of freedom fighters (apparently) need US assistance and Rambo is the man for the job…. but in this case he’s not, he declines the offer, thus allowing his mentor Colonel Trautman to go in his place. This nicely sets up the actual plot of the film: Trautman is captured leaving Rambo no choice but to go in and rescue him - one man against the entire Russian militia; hardly seems fair huh?

Of course the film is absurd in its premise and in its execution, there are some truly terrible lines (“Leave, this is not your war” – “It is now”) and the final battle where the Afghan rebels run down tanks and armoured vehicles with horses to secure victory beggars belief. But in amongst this carnage there are a few nice touches of pathos, humour and scenes I would not have expected to see; for example after Trautman gives the obligatory ‘for king and country speech’, he talks about the war in Rambo’s own soul, telling him he needs to come full circle and embrace who he is, which, when Rambo, finding out Trautman’s fate, agrees to a rescue mission, leads to a shot through a turning wheel, a nice little touch that not only highlights the aforementioned talk, but actually harks back to the first film and his impassioned breakdown at the end. It, somewhat obviously, also tries to draw parallels with the Russian occupation and the Vietnam War; this being the eighties, the Russians are still very much the bad guys.

But such scenes are few and far between, this is all about the action and it comes is swathes, too much in fact. I read that this film was once in the world record books for the most acts of perpetrated violence, I can quite believe it, the final act is non-stop and eventually wears you out! Fortunately, it never crosses the line into outright brutality, leave that for Rambo IV …

It’s far from a great film; very much a film of the eighties and some might argue that is where it should stay. But because it does not preach with the ham fistedness of its predecessor, it adds in some much needed humour and the fact that it is happy with its own convictions, it should be viewed for what it is: loud, brash and not very convincing but holds a story and has some entertainment value. Rambo III was shot using Arriflex 35-III and Arriflex 35 BL4cameras on 35mm film. This release was made using the original camera negative which was scanned at 4K resolution and utilised for the creation of this Ultra HD Blu-ray release. The disc presents a native 4K 3840 x 2160p resolution image in the widescreen 2.35:1 aspect ratio, and uses 10-bit video depth, a Wide Colour Gamut (WCG), High Dynamic Range, and is encoded using the HEVC (H.265) codec for HDR10. We reviewed the Region free UK Ultra HD Blu-ray release of Rambo III on a Panasonic 65DX902B Ultra HD 4K TV with a Panasonic DMP-UB400 Ultra HD Blu-ray player.

One of the very first discs I reviewed on HD DVD was Rambo III, still from Studiocanal. The picture review was very positive, and it’s only improved with age. The new scan has brought out even more detail, this is especially true of the desert landscape, with the rocky terrain, sand and debris in the foreground, and the mountains in the distance – some of the shots are absolutely stunning. Skin has texture, every pore, hair and fake scar is perfectly seen, while clothing has clear weaves.

The WCG and HDR really add to the image, giving a depth and presence to the colouring; again pointing to the desert landscape shots, where the grading is pretty much perfect. The sky is so blue and the terrain is so red; check out the sunsets or any of the landscape shots.

The black level is improved, giving plenty of depth to frame, and hides a great deal of shadow detail; the first attack on the fort, subsequent escape and the cave fight showcase the best examples. While the white end of the scale is just as impressive, metallic sheen, desert haze, eye highlights, all are wonderful.

Digitally there are no compression issues and the original source is in top notch condition, there is a pleasing sheen of grain to retain that filmic look as well. Another tremendous picture. Unfortunately the disc has not been up-graded to the immersive surround tracks, so no Dolby Atmos or DTS-X, what we do have is the same DTS-HD MA 5.1 track that can be found on previous releases. Unlike the previous film, the surround track this time around is far more engaging when it comes to the surrounds, there is therefore a much clearer defined surround experience. The baton fight in the beginning where there crowd is cheering all around, the workmen on the temple repair and the horse game in the Afghan camp are decent examples that give good ambient effects.

When the action hots up there is plenty going on in the surround field, with gun shots, explosions, shouting, helicopter and vehicle engines all being given full use of the surround environment. Bass is decent, adding some punch to the low end effects, it’s never subterranean, but LF effects are numerious keeping the sub on its toes. Dialogue is clean and clear, sounds natural enough, given the odd bit of directionality and never misses a beat, even in the final act mayhem. While Jerry Goldsmith’s triumphant score is perfectly layered into the mix, having the bombast when needed to enforce the visuals. UHD
Audio Commentary – With director Peter MacDonald, whose somewhat dry and pause laden chat discusses all aspects of production including, sets, locations, stunts and his short time to prepare.

Blu-ray
Rambo takes the 80s Part 3 – Continuing form the first two discs, the same interviews discuss the film's legacy.
Full Circle – Typical fluff promoting the film.
A Hero's Journey – More of the same, this time looking at the three films in the trilogy.
Rambo's Survival Hardware – The man’s weaponry, notice how much his knife grows the further into the series you get?
Alternate Beginning
Deleted Scenes
Interview with Sylvester Stallone - 8 minutes with Sly, talking about the film and character.
Afghanistan - A Land in Crisis – 30 minute feature looking at the troubled country.
Guts and Glory – 30 minute archival feature that discusses the films impact upon release.
Behind the Scenes – Guess what?
The Restoration – Before and after the clean-up.
Trautman & Rambo – Just over 2 minutes of the pair’s chemistry and camaraderie.
How to become Rambo Part 3 - Dr. Franco Columbo, Sylvester Stallone's body building coach, returns for this final exercise.
Original Trailer
Original TV Spots
Selling a Hero – Easter egg Rambo III: violent and silly, that about sums it up, expect little and that’s what you will receive, even if there is the tiniest bit of substance hidden beneath all the mayhem. With bigger budgets comes bigger battle scenes; each film has been bigger than the previous, with this third part being outrageous in terms of violence; its last act being pretty much non-stop to the point of becoming exhausting. Better than Part II because of the limited depth, humour injection and less political ham-fistedness, but still not a patch on the original.

As a 4K UHD set, the package from Studiocanal is pretty good; the native 4K picture is stunning; with plenty of detail, glorious colouring and terrific blacks. The sound may not have been upgraded, but the DTS-HD MA 5.1 track is pretty bombastic, with decent bass, plenty of surround effects and is clean and clear. The extras package, looks extensive, but is pretty standard fair, even if it covers most of the bases.