Plenty of eye rolling and groaning 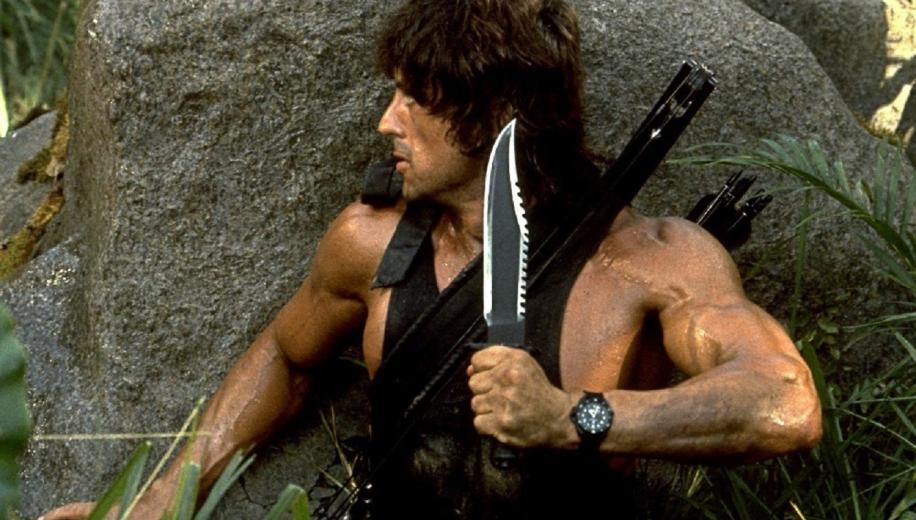 Do we get to win this time?

When I reviewed tonight’s feature for HD DVD, oh, some years ago, here were my first few opening lines: “Rambo: First Blood Part 2, is exactly how I remembered it to be, loud, brutish, completely ridiculous and laden with political ham fistedness. It clunks along until its inevitable crass ending.” Re-watching it, my views have softened, slightly, it is still ridiculous nonsense, even Stallone ranks it last in the Rambo quadrilogy, but for the era that it was made, and the injection it gave to the action hero genre, it has its place.

The plot of this film might be considered basic stuff, but for the time it was fairly standard; Rambo is released from prison after accepting an assignment in Vietnam to find possible war prisoners. When he finds said prisoners and tries to return with one as proof, he is abandoned and left to be captured. Due to his unparalleled combat skills, Rambo manages to escape, take on the might of the Vietnamese and the Russian armies before unleashing bloody hell and managing to rescue all the captives and finishing off with some (not so) poignant sentiments.

OK, so there is quite a lot bad with this film, and not all of it can be written off by the era it was made, for example, the character of Rambo, himself - gone are the depths of character which made the original so poignant, here, he is a mouth piece for an aggrieved nation, with a chance to return to a war that America was still reeling from. But more than that he becomes a kind of superhero, championing all that was wrong and flying the flag of patriotism; his final speech meant to inspire and smooth over the horrors. It doesn’t work. I’m not sure it really worked upon its release, leaving a feeling of being cheated by the cheese of it all. The whole character reads as invincible – America against the world – and his abilities are so profoundly absurd as to beggar belief. His choice of a bow and arrow, used “because it is silent” (tell that to the foley guy, it was louder than most of the AK-47s) and its never ending supply of arrows – pretty good shot too, better than a pistol at 50 yards - is there purely for the spectacle. And as for being quicker than a rocket launcher with a pull of a trigger, well …

As the stereotypical hero, he heads up an ensemble of other stereotypical characters; Trautman represents the establishment, up in arms but powerless to do anything about it (never takes his coat off either!), Murdock represents the conspiracies, devious and cunning, trying to fool the establishment, the Vietnamese are represented as nothing but reprehensible and there to be shot, and add some Russians because they are the BAD guys (1985 remember) with even the love interest, added in one sentence with a kiss, there only as a plot device to incite the rage against the enemy. It is pure comic book in its plotting, Sly, even thinks so, but against the odds, it works on that level. It chops and changes, moving from one scene to the next with explosions as exposition, and scenes added in to appease the first film (the jungle ambush), always with the ending firmly in sight. Written by Sly, himself, and James Cameron, this is popcorn for idiots! Some defining features are Jerry Goldsmith’s score; sweeping and emotive enough, riffing off the first film's theme, but turning up the action, and it also the looks amazing, Jack Cardiff proving that even if a film is terrible it doesn’t have to look like it. Clearly the weakest of all the Rambo films, it still, nevertheless, has swathes of fans, one of which was Ronald Reagan – one could argue that it was only ever made for him! 
A thorough make over, revealing plenty more in the image

Just like the work done to the first film, Part 2, has had a thorough make over, revealing plenty more in the picture; detail is terrific with skin texture and clothing weaves being well defined. Computer screens, desk clutter, rock faces, leaves, mud, bamboo: all have keen edges; the muck and filth that Rambo is held in prior to his torture has never looked so icky! Sweat and grime, cuts and bruises, all are well realised. The many establishing shots, especially over the jungle, look stunning. The occasional soft focus image, part of the cinematography, is, obviously soft, but it’s meant to be.

WCG and HDR really embellish the picture, giving a depth of colour to really add punch to the image; the red of Rambo’s jumper, the lush greenness of the jungle, the deep blues of the sky, the intensity of the orange in explosions or of the sun as it’s setting, all add significance.

The black level is improved giving decent shadow detail and adding much depth to the frame, the occasional bout of grey, found more in the jungle, is inherent in the source, but has been improved, as on the whole, black it great; the night attack for example. The white end of the scale fares just as well, with plenty of highlights pushing the frame, the glint of sunlight on water, the sheen of metal, the pinprick of light in eyes – really nice stuff.

Digitally there are no compression issues, and the original source is clean, with a nicely resolved grain sheen, giving a terrific filmic look; great stuff. Unfortunately the disc has not been up-graded to the immersive surround tracks, so no Dolby Atmos or DTS-X, what we do have is the same DTS-HD MA 5.1 track that adorns previous releases, which is a shame as it is all rather front heavy. There are plenty of effects, vehicles, the stone breaking in the prison, jungle ambience, weapons fire and explosions, but rarely to these transition with any significance to the surround speakers, helicopters fare best, as does the storm in the jungle.

Bass is ok, seldom does it plumb any depths, and gun fire and explosions could have done with a bit more help from the sub, but what there is fares well. The score is very well layered into the mix and makes good use of the dynamic range. While dialogue is clear and precise never getting lost in the mayhem. It is not a patch on modern action films, but does fairly ok. UHD
Audio Commentary – With director George P. Cosmatos, who, despite his accent, delivers a thorough chat on just about all aspects of the film making process, including set design, problems, filming techniques, casting, stunt work, filming locations, actors and scripting.

Blu-ray
Rambo takes the 80s Part 2 – Continuing from the same on First Blood, interviewees discuss the films legacy interspersed with clips.
We get to win this time – 20 minute feature looks at the original script, the changes it went through as well as directing choices.
Action in the Jungle – 7 minute feature looking at the challenges of the location filming.
The Last American POW – Spend 2 minutes with real life POW, Robert Garwood.
Sean Baker - Fulfilling a Dream – 2 minute salute to this film fan.
Interview with Sylvester Stallone – 2 minute archival chat with the star.
Interview with Richard Crenna – Less than 2 minute archival chat with the actor.
Behind the Scenes – Another 2 minute feature looking, behind the scenes, no less!
The Restoration - Comparisons before and after.
How to become Rambo Part 2 - Dr. Franco Columbo, Sylvester Stallone's body building coach, is back for more core exercises.
Original Trailer
Original TV Spots Written by Sly, himself, and James Cameron, Rambo: First Blood Part II can justly be labelled as popcorn for idiots – its invincible hero, carrying the hurt of an aggrieved nation, wages war on the Ruskies in Vietnam while trying to save American POWs against the wishes of conspiratorial mercenaries. The film is basic in its interpretation, and obvious in its regard, but made all the better for Jerry Goldsmith’s evocative and emotional score and Jack Cardiff’s wonderful cinematography. There is plenty of eye rolling and groaning at both some of the action and most of the dialogue, but it somehow manages to be both engaging and entertaining despite being the weakest of all the Rambo films.

As a UHD 4K set, the package from Studiocanal is pretty good; the native 4K image is stunning in terms of detail, colour reproduction and black level, leading to the best it’s ever looked. The sound is ‘vanilla’ DTS-HD MA 5.1 surround, and maintains its front heavy aspect, something it’s always had, but has reasonable bass and the score comes across well. The extras cover a lot, even if they are short and in SD.