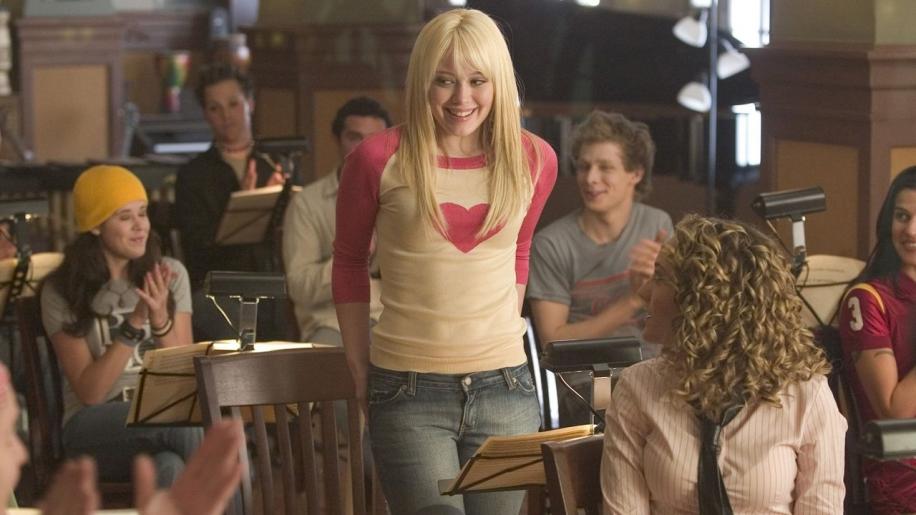 The image is a nice sharp one, with a fair amount of dust, yet no scratches, which I would expect for a recent movie (maybe it never got played in a cinema and was gathering dust?) Colours are a little muted though - I'm almost positive they should be more vivid - with detail being clear and abundant, blacks are deep and dark and flesh tones are natural. I didn't notice any haloing or artefacts either, nor any grain either. It's functional, but the dust and almost washed out colour (for me anyway) knocks it down a point or two.

For a Dolby 5.1 mix, this is unimpressive. It's simply very front heavy, using the rears only for musical numbers and ambience, but it almost feels like it's when someone remembered to plug the necessary equipment in. It's also quite a quiet soundtrack, compared to a lot of the releases I've reviewed recently, having to increase the volume up between 5 to 10 db from my usual listening volume. It's not a particularly exciting soundtrack to listen to either, with the musical numbers (of which there are a few) being the highpoints, but I've frankly heard so much better (witness The Phantom Of The Opera for example). Sorry, but compared to more recent musical fare, this needs to raise its game more.

Kicking off the extras are 5 deleted scenes, which can be played individually or together and they last a shade over 5 minutes in total. They're mostly extended scenes from one's in the movie and were most likely exercised for dragging the pace down (too late for that). The Outtake last a shade over 4 minutes and is a typical blooper reel, including the fact it's not funny either. The “Behind the Scenes” featurette lasts for 7 minutes and is very much a typical, EPK with everyone praising the movie and Duff's piercing voice being a great advert for earplugs. It did make me laugh hearing the director saying it was a good movie you could take your “kids to see” - as punishment methinks. The “Orchestra Sequence” lasts for 90 seconds and is basically a montage of footage from the movie and behind the scenes set to orchestral music. There's a music video for “Fly” by Miss Duff, but by now my ears are really not wishing to hear her more than they already have, so excuse me while I skip it. The “Interactive Jam” is a music “making” feature - which isn't as interactive as it appears. You get to choose from a menu of different sounds, which then goes down to sub-choices of added sounds. You do this 4 times and you get your tune - it's not really very interactive at all, as it is ultimately all pre-determined. Finally we get the trailer for the movie, which tells you everything you need to know in a lot less time. As extras go, they look plentiful, but are ultimately rather shallow.

It's a teen movie, but I just can't picture teens queuing to grab this. It's very Middle America, I guess as it tries to be inoffensive and preach “family values” in a sense, but it's just too sickly sweet, with no meat to the storyline and no real form of conflict, even if getting over the death of a family member is the conflict it's not believable, well at least to me anyway. I can't recommend this on any level really; it's far too generic and trite. Please studios - no more Ms. Duff movies?