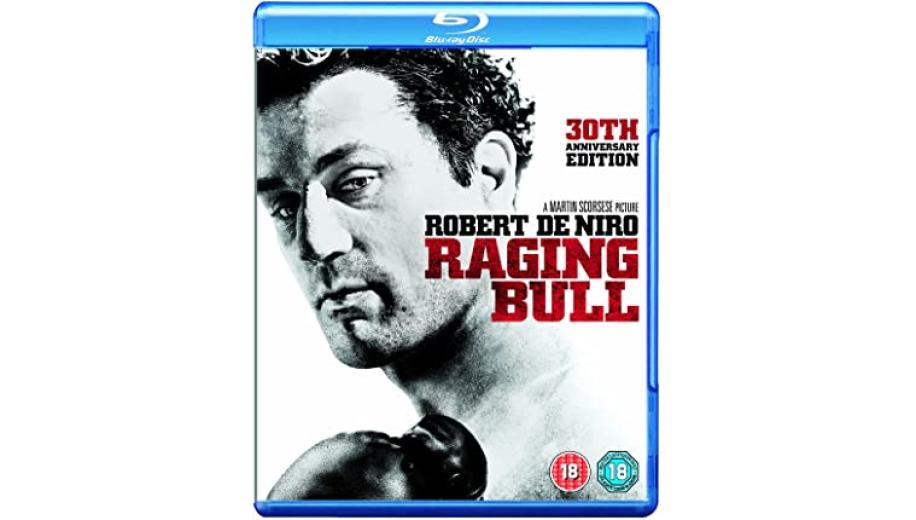 Raging Bull comes to UK Region-Free Blu-ray with – as far as I can tell – exactly the same 1080p High Definition video presentation, in the movie’s original theatrical aspect ratio of widescreen 1.85:1, as we got for the original early 2009 Blu-ray release. On the downside, this means no remastering, and this means that the (admittedly minor) issues with the aforementioned release have simply been carried over here. But thankfully the earlier edition already sported an outstanding video presentation which is undeniably demo-quality, and certainly the best that we have ever seen from the Scorsese masterpiece. It may not be absolutely perfect, but it’s unquestionably close, and almost impossible to fault. The movie’s all-but entirely monochrome – black and white to be precise – with only a couple of home videos shown within the film coming out as colour (and also intentionally faded for effect). It was a tactic used by Scorsese to avoid getting an X-rating for all the bloody fight scenes (and also to ensure the boxing gloves didn’t look too modern because of their brighter red colour) but the end result was to make the movie even more iconic and memorable, and the cinematography is perfectly captured by this rendition. Excellent detail, spot-on low contrast, negligible print defects and damage (certainly nothing that would impinge upon your enjoyment of the movie), and simply no digital side-effects are amongst the highlights of this transfer. Black levels are superb, with no signs of crush, allowing for some splendid shadowing – note the jail scene, or the shot of the hooded fighter coming out of his corner. Some viewers have complained about the old (and thus this) release coming with a slightly lighter strip on the right hand side of the image but I didn’t notice it all – I suspect you’d have to tinker with your TV settings to the extreme if you want to even see it, and therefore it has absolutely no impact on the presentation or score. To accompany this 30th Anniversary release we also get exactly the same DTS-HD Master Audio 5.1 track that came with the previous Blu-ray edition, and – again – that’s not a big problem as the track was good enough (although perhaps not demo quality) to begin with. Dialogue comes across reasonably clearly and coherently throughout, from DeNiro’s mumbling latter-day monologues, to the scenes of marital and familial abuse, largely emanating from across the frontal array – and in all honesty that’s where the majority of the action comes from anyway. Effects are headlined by the ring-side moments, strewn with the crackling explosion of flash bulbs and the thundering wallop of some truly devastating blows, and giving you some nice atmospherics from across the surround array, and even a little rumbling bass to enhance the proceedings too. The soundtrack gets keen presentation from across the channels, even broaching the arrears, and coming through with a nice resonance and, overall, whilst this may not stand up to critical (aural) comparison with modern boxing movies – i.e. The Fighter – it still sounds remarkably good for a 30 year-old movie. You might have assumed that this 30th Anniversary double-dip came into existence purely because they wanted to ‘upgrade’ the previous 2009 Blu-ray release; and perhaps further deduced that – since clearly no change has been made to either the video or the audio – the upgrade must have come in the extras department. Well, you’re partly correct, we do indeed get 4 new Featurettes and a vintage chat show interview clip, totalling about an hour of new material. Realistically, however, the package was already brimming with extra material, so you’d be forgiven for not wanting to upgrade for these few items alone, however wonderful it is to have them included here.

Director Martin Scorsese and Editor Thelma Shoonmaker provide the first of three full-length audio commentaries which provide just about all of the background information that you could possibly want to know about the production – even before you get to the other extra material. Scorsese dominates this first track, and provides plenty of anecdotes and personal references, illuminating the somewhat painful production history, with Shoonmaker further expanding upon the mammoth editing effort that they both undertook. The second commentary, in my opinion the one you should listen to last, is the cast and crew commentary with actors John Turtorro and Theresa Saldana; producers Irwin Winkler and Robert Chartoff; sound manager Frank Warner, casting manager Cis Corman, and cinematographer Michael Chapman, as well as Robbie Robertson, longtime friend of Martin Scorsese. It’s a good effort but also a clear case of ‘too many cooks’, and the third commentary offers a nice compromise – the storytellers’ commentary – with co-writers Paul Schrader, Mardik Martin and Jason Lustig joined by The Man himself, Jake La Motta.

Raging Bull: Fight Night is a 4-Part feature-length documentary. Before the Fight gives us 26 minutes of pre-production revelations, with Scorsese, De Niro and La Motta himself all contributing towards the discussions on the original story, script and casting of the movie, and some nice behind the scenes archive footage. Inside the Ring spends 15 minutes taking us through the filming of the integral (but comparatively short in the context of the whole movie) fight scenes, offering background into how they shot, complete with behind the scenes footage and interview snippets. Outside the Ring runs at 27 minutes and shows us the work that went into the rest of the movie, and After the Fight rounds this comprehensive offering off with a 15 minute look at the post-production work, like scoring and sound-effects, as well as reflecting on the film’s lasting appeal.

The Bronx Bull, one of the behind the scenes featurettes from the 2009 release, is a 28-minute retrospective reflection on the movie, headlined by Jake La Motta himself, but also with contributions from Editor Thelma Shoonmaker and a number of film critics, who all examine the movie’s themes, messages and its impact.

Marty & Bobby is the first of the four new offerings, giving us 14 minutes of interview footage (interspliced with interesting archive footage) from heavyweights Scorsese and De Niro, who discuss how they partnered up in the first place, what it was like to make movies together, and what got them involved in this project, as well as the colourful production history itself. De Niro hits all the key points – the weight loss/gain, and the personal issues of the character; with Scorsese too relating to the very personal tale. We even get a small interjection from Producer Irwin Winkler, with his thoughts on the production.

Raging Bull: Reflections on a Classic takes 12 minutes to offers us the views of four acclaimed directors (Richard Kelly, Scott Cooper, Neil LeBute, and Kimberley Pierce), who all discuss the impact that this modern classic had on their work.

Remembering Jake spends 11 minutes with the Veterans Boxers Association of America, literally reminiscing and remembering Jake La Motta. They don’t just limit themselves to discussions on his fights either, chatting about the man and his temperament as well.

Marty on Film is the last of the four new featurettes, a very personal 10 minute offering which proves to be as good, if not even better than the conversations between De Niro and Scorsese, with just the latter on board here to provide some interesting insight into his early career in filmmaking, his ability to relate to this particular story, his films in general and even his future in the industry. Well worth checking out.

De Niro vs. La Motta offers up split-screen shot-by-shot comparison of the two fighters in action in the ring, visually highlighting the sheer precision of Scorsese’s work, his attention to detail and desire to remain authentic.

Cathy Moriarty on The Tonight Show gives you access to the original 1981 chat show with Johnny Carson, with Moriarty talking about her debut performance. An undeniable masterpiece, certainly one of the best movies that superior auteur Martin Scorsese has ever directed, and featuring arguably the best performance in the career of Robert DeNiro, himself a contender for the best actor of all time; Raging Bull shook things up in 1980, and still remains to this day a blistering example of breathtakingly unusual film stylisation, stunning black and white cinematography, brutally raw, bloody fight sequences and... well, and everything you would expect from a film which is basically pure perfection. Charting the life of a man whose almost unparalleled skills in the ring were left unacknowledged within the mafia-controlled world of boxing, and whose temper – unchecked outside of the ring – destroyed everything that he ever cared about; Raging Bull is perhaps the best example of method acting in action – with Robert DeNiro simply becoming real-life middleweight contender, Jake LaMotta. Stunning.

On Region Free UK Blu-ray this modern classic gets the treatment it deserves, with stunning video presentation and superb audio, as well as a hefty selection of worthy extras. Those who’ve already bought the 2009 special edition, may find the few ‘extra’ extras don’t warrant a double-dip (considering the original package was pretty damn comprehensive), but for those who still haven’t picked up this masterpiece, then this is definitely the definitive edition to own.

If you’ve seen it, you know why it’s on everybody’s top movies lists, and if you’ve yet to experience the brutal beauty and raw power of this undisputed masterpiece, then now’s your chance to rectify that situation. It comes with the highest recommendation.