I was taught that the way of progress was neither swift nor easy. 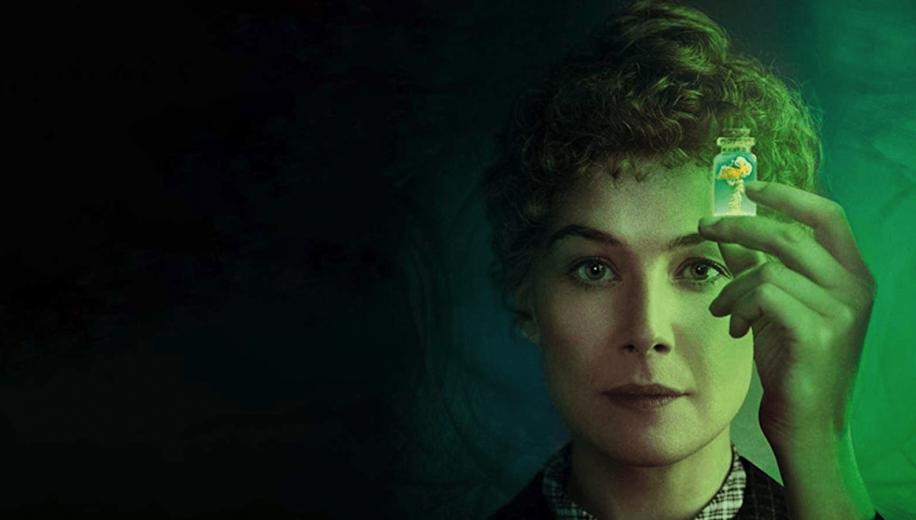 Following her critically acclaimed success in A Private War, Rosamund Pike gets another shot at a prominent leading role, bringing the life of Marie Curie into the limelight for an interesting but not wholly revealing study into what made this pioneering scientist tick. An actress who kick-started her career as a Bond girl in Die Another Day, Pike has come into her own of late, escaping limited and arguably miscast love interest roles in favour of far more suitable strong female leads, with Marie Curie probably the ultimate role in her career thus far, and, at the very least, she's perfectly chosen for the part.

Pike is perfectly chosen for the part

Frustrated by her treatment amongst her disdainful male peers, Polish immigrant scientist Marie teams-up with Pierre Curie, finding a partner equally passionate in work and in love, although Marie remains focussed on her curiosity with naturally existing elements which emitted energy - something the scientific community regarded as being as ludicrous as assertions that the world was round, all those centuries before.

Cold and socially awkward, with a dogged determination to practice her science at all costs - the only element in her life that appears to trigger any form of emotional response - Pike's Curie is a superb role for an actress who has always been able to (for good and bad) nail cold-as-ice parts, affording one of the most important figures in the history of science a powerful impression as a sheer force of science-driven nature. Of less interest - and less convincing - is her romantic dalliance with Sam Riley's fellow scientist, which only appears to distract from her true passion in life, something evident pretty-much every time she opens her mouth, often startling polite company into silence with her assertions about how ignorant the scientific community are, and the fantastic studies she is working on.

Radioactive goes a little sideways for its style

Shot with a suitable period look, Radioactive goes sideways a little for its style, particularly as Curie talks about experiments, isotopes and so forth, seeking perhaps to illuminate this science-speak with CG images of crystallisation or elements evolving, but between the cheap effects and the fact that they don't really have any place here (other than to undermine the importance of the words being spoken, as if to say "this is not really very interesting, so here are some pictures"), it's not a good look for Radioactive. Imagine if Chernobyl had been rendered with such a casual visual interface, for the cheap seats? Radioactive missed its late March theatrical window due to Covid, landing on digital instead, but it's hard to see how it would have ignited the cinemas, riding high when Pike is allowed to utterly embrace the character and go solo for her tirades and at-all-costs drive to discovery, but unfortunately not having enough faith in her to go it alone without unnecessary romantic and visual embellishments. It could have been much better than this.