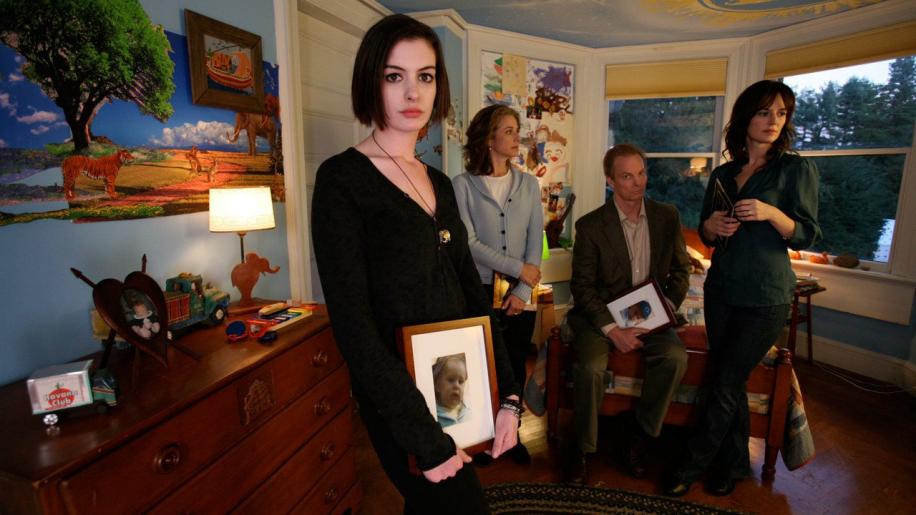 I'm not sure how many people really regard Anne Hathaway as a competent actress, with any kind of calibre or distinguishing acting skills. Taking a cursory look at her film career, you can see a bunch of ostensibly saccharine-sweet family-friendly rom-coms, from The Princess Diaries movies to Ella Enchanted and Bride Wars. Even the big-screen adaptation of the classic Get Smart series seemed like a bit of a fluffy production to sign up for, more for the money than anything else. But those who caught a glimpse of her in Brokeback Mountain might have seen a spark of what she was truly capable of, and Becoming Jane gave her yet more opportunity to show her mettle. Even The Devil Wears Prada was a slightly more cynical, insightful movie than it would seem at face value. And in the little-known indie-drama Havoc, her powerful performance was shamefully overshadowed by the marketing of the sex scenes. Rachel Getting Married? Well, what a truly bad title choice for a movie that is far from the cheesy, stereotypical rom-com that one might assume it is. But the movie is actually far from that expectation and, title aside, this was Anne Hathaway's opportunity to truly shine.

Kym, a teen model who has just spent the best part of ten years in drug rehab, is returning home for her sister Rachel's wedding. But with her family and friends all concerned she many not yet be fit to return to society, and with her having to deal with her own personal demons, the pressure is on for her to be 'normal' and fit the role of loving sister and daughter, and willing bridesmaid, as everyone expects from her. Determined to be true to herself, she eschews the behaviour expected of her - especially given the overtly celebratory situations she is engulfed in - and addresses the problems in her dysfunctional family head-on, attempting to resolve all the family issues and return to some semblance of life after her fractured youth.

Most famous for Directing Silence of the Lambs and Philadelphia, Jonathan Demme brings us Rachel Getting Married as if it were an intimate documentary-like profile of a key moment in the history of a damaged family. Having spent the last decade working on biographies and documentaries following the likes of Neil Young, Bruce Springsteen and a couple of US presidents (with only the by-the-numbers Denzel Washington remake vehicle The Manchurain Candidate marking something resembling a return to standard movie-making duty), and his next project a movie about Bob Marley, it is no wonder that he chose to direct this quaint little piece as if it were a fly-on-the-wall observation of a family wedding. This could almost be a home video, albeit shot with HD camcorders, and with many of the characters underplayed by little-known actors, it feels very much like a true-to-life depiction of a dysfunctional family.

As Kym, the black sheep of the already fractured family, Anne Hathaway brings us her most powerful performance yet. At once damaged, vulnerable, sensitive and wounded, she also exhibits a freshness and honesty that - in and of itself - causes problems in a family where the members just do not want to address their true issues, instead merely wishing to give a passing nod to the reasons why everybody is so hurt, so broken, and mostly lay the blame on Kym - as if she had an illness. Her sister, Rachel, is understandably worried, not least because she just wants to enjoy her special day, and this often leads to moments where she treats Kym unfairly, or dismisses her opinion unjustly. Similarly the dad loves Kym, but acts like she is still a child who needs to be protected and treated for her problems, rather than treating her like an adult and allowing her to address the damage done by her recklessness over the years. Rosemarie DeWitt and Bill Irwin play these roles respectively, but their portrayals are so nuanced that you occasionally wonder whether it is indeed acting at all - which is perhaps the purest form of the art. We also get an ageing Debra Winger in a poignant cameo as the damaged, estranged mother, who may just be behind half of the family problems herself. All of the cast, those mentioned and those not, do well at bringing you a very honest and dramatic portrayal of family life, underplaying their parts to the benefit of the authenticity of the production.

Based on a semi-autobiographical story by Sydney Lumet's daughter, Jenny (with many of the scenes, including the involving dishwasher sequence, based on real-life events) Rachel Getting Married rings true on all levels, although there is a downside to this style of filmmaking. First up you have to tolerate a remarkably amount of shaky-cam antics, reminiscent of the old days of NYPD Blue - which holds the award for induced motion sickness, but if you can get used to this (which is possible, given the interesting, penetrating, insightful plot) then there is a marginally bigger issue. Where most movies are made with the intention of being - above all - entertaining, this movie was clearly shot in a more 'real' fashion, so nothing really takes place with any feeling of timing or pace. The Director spends far too long on unnecessary moments - where viewers may have preferred to get to know more about the characters, see more confrontations or resolutions, he instead lingers on the wedding speeches (which should have been cut short after Kym makes her controversial contribution) or the celebrations themselves, often distancing the viewer from the message that he is trying to make. It is a shame, but a price that perhaps we have to pay for such a honest, documentary look that is so free of frills. The trouble is that occasionally it feels like he just does it for personal gain - having gone to all the efforts of setting up this wedding, why not show it in all its full-length glory? Well, it leaves the near-perfect, slender and tautly designed 90-minute drama embedded into a near two-hour runtime, leading to a significant amount of unnecessary fat. Although it has a decent, worthy story to tell, it could have been told slightly better - taking in the benefits of modern generation streamlining whilst retaining the fresh feeling associated with such an honest blemishes-and-all look at family life. Still, it is a price worth paying - for Anne Hathaways standout performance alone - but also for all of the tiny moments that may ring true to the lives of many of the people watching it. It's an interesting movie, riveting as a character study and drama and worth checking out.