Race with the Devil Movie Review 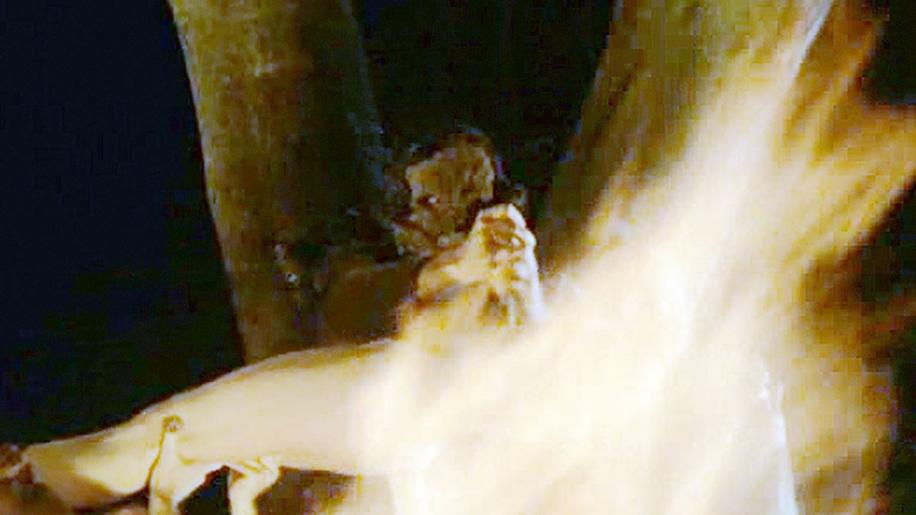 Who remembers this one, then? Come on, folks - it's that old stalwart of Friday nights on the Beeb. A glorious 70's B-movie, horror-cum-roadster with a belter of a twist ending. Harking from the Roger Corman-style of junk exploitation, where everything in it was begged, borrowed or stolen, the cast and crew were all family and friends and the makers were literally shooting from the hip, this genre-crossover saw real-life buddies Peter Fonda and Warren Oates take to the mean backwaters of the good old U.S. of A. in their brand new RV for what was supposed to be the vacation of their lives. But with the epic screaming duo of Loretta Swit (MASH's own Hot-Lips Houlihan, herself) and Lara Parker as their wives, an ill-advised rest-stop off the beaten track in view of a sinister looking tree and a whole heap of bad luck on their tail - their only course of action is to hit the gas and Race With The Devil!

In a trend that takes in the gory excesses of H.G. Lewis's 2000 Maniacs through The Texas Chainsaw Massacre and on to The Hills Have Eyes, and continues unabated to this day, unwise city-folk once more put themselves at the mercy of brutish bumpkins as Hollywood explores the darker side of the American way of life. Read into it what you will, but over the pond there is a definite distrust of rural denizens. When dirt-bike enthusiasts Roger (Fonda) and Frank (Oates) spy the sacrificial slaying of a young girl during a Satanic ritual they set in motion a terrifying chain of events that put themselves and their wives in peril, and a deadly cross-country game of cat and mouse ensues. It seems that everywhere they go the coven has got there before them and left some grotesque calling card - a dead dog, a threatening rune. The Devil's disciples are, indeed, legion and they soon discover that they can trust no-one. It can be hell on the roads, as they are going to find out.

Great trashy fun, Race With The Devil rises above the innate ludicrousness of the plot with some terrific performances, an ominous sense of dread and all-pervading menace, and a final act that hits the adrenaline button with force. The close-knit group in danger is a well-used hook, but the difference here is that our heroes are forever on the move and not cut off in some isolated farmhouse. They seek police help, the apparent safety of a crowded camper park and travel along highly-used roads. Sanctuary should be all around them. But one look at the smiling, we-know-something-you-don't faces in the trailer park and the leering looks from every gas attendant and road-worker they meet prove that they simply do not know who they can trust. Even their state-of-the-art (for its time, anyway) RV is not invulnerable, with unwelcome guests residing in the cupboards and far too many handholds for the Satanists-cum-stuntmen pursuing them to catch onto. The macho pairing of the two leads also provides a chilling vulnerability, as no matter how much reassurance they offer their increasingly anxious wives, you just know that they, themselves, are also trying in vain to bottle up their own growing fears. The escalating nightmare of paranoia is etched across their troubled brows and the two stars belie the admittedly daft hokum of the scenario with some deadpan humour and a tremendous conviction during their last-ditch attempt to turn the tables on their tormentors. Check out the look between the two when Fonda finally picks up that shotgun.

“I don't believe a school-bus on a Sunday!”

After the initial director was fired, last-minute replacement and genre-fave Jack Starrett stepped into the fray and elevated the movie from a bargain-bin chiller to an action-fest and swapped the eerie feel of the first act for the hi-octane aggression of the second. Starrett, an actor and stuntman as well as an acclaimed director, is perhaps best remembered for his turn as Gault, the bullish cop that gives Stallone's Rambo a rough time in First Blood -“Well, the man said clean him up. Clean him up!” Also helping to plan the marvellous stunt work seen as coven members clamour about on top of the speeding RV and multiple vehicles flip-over and/or explode, Starrett tightens the screws with a no-nonsense approach that lets mood dictate the action. No shot is wasted, nothing is seen that impedes the narrative and each successive scene raises the unease a notch or two higher. Even his cameo as one of those sinister gas attendants adds a wonderful frisson of tension, without anything suspicious being done or even said. Just a look, just a slight reaction. Streamlined and efficient direction, but always enough to unsettle. This is fast-track filming that ditches all padding and waffle. There's no scenery to be chewed in this neck of the woods, that's for sure.

“Sheriff, we saw a girl killed. She fell down on the ground. We saw it.”

Some of the best moments come early on when the legendary R.G. Armstrong appears as the local sheriff. A character actor of enormous presence with eyes like chipped onyx, Armstrong always hands in a marvellous turn. A veteran heavy in many a western, here he takes the thumbnail sketch of the sheriff and makes it something uniquely disquieting, his introverted malevolence still felt long after his character has left the film. That his almost comedic double-act routine with Deputy Dave raises more hairs than laughs is an exceptional quality that keeps the tone macabre. More than once I've been reminded of The Wicker Man when viewing this, for its cool air of treachery and deceit, lingering looks and false smiles. And, just like you do for poor old Edward Woodward's unfortunate policeman, you still think that there's a slight chance of the good guys making it.

Race With The Devil is still a fairly silly film for all its shocks and excitement. The situation, on the whole, is entirely contrived and does not stand up to scrutiny. But if you find yourself thinking about the what ifs and how comes along the way just remember that in this Twilight Zone Texan backwater we are the outsiders, the strangers in a strange land and, since we're playing by the Devil's rules - then anything can happen on a detour to Hell.